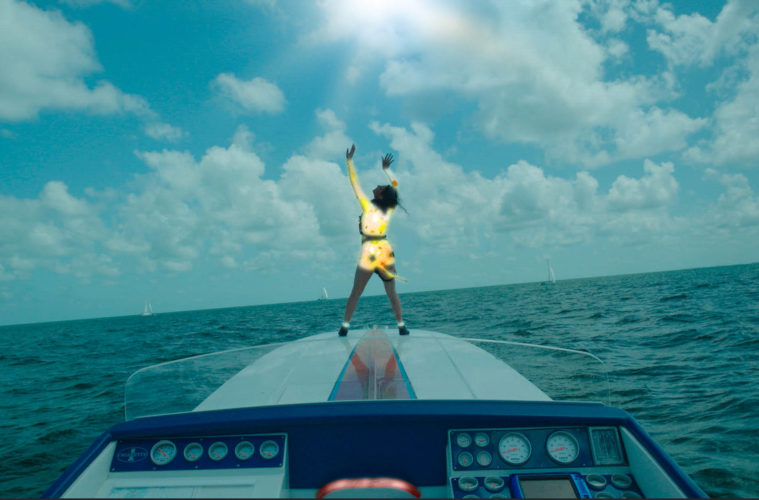 A profound and poetic passage and a playful Fitzcarraldo allusion aside, Omniboat: A Fast Boat Fantasia is a shockingly bad picture. Omnibus (er, boat) flicks are only as good as their best passages and as bad as their worst. While the film, made collectively by several talented filmmakers working under the banner of the Borscht Corporation, doesn’t reach a Movie 43-level of obnoxiousness, it comes close in a few sections. Its inclusion in Sundance’s NEXT category represents a troubling lack of judgment. The category was originally meant for lower-budget indies and emerging talent. Unfortunately, someone’s potentially stunning little indie didn’t make the cut and rather this over-bloated picture featuring several Sundance alumni was accepted instead. At my screening, the film inspired a few more walkouts than Flying Lotus’ nearly pornographic Kuso did last year. Kuso, however, worked while Omniboat was met with much silence when shown to a sober audience at 12:30 pm.

Directed in segments that aren’t clearly labeled (perhaps to protect the future careers of their makers) by the Daniels, Hannah Fidell, Alexa Lim Haas, Lucas Leyva, Olivia Lloyd, Jillian Mayer, The Meza Brothers, Terence Nance, Brett Potter, Dylan Redford, Xander Robin, Julian Yuri Rodriguez, and Celia Rowlson-Hall, Omniboat presents itself as a broad Miami opus centered around the life of a speedboat called Layin’ Pipe, bought and subsequently destroyed specifically for the picture. A loose framing device follows real estate developer Jim Cummings (played by Mel Rodriguez) who dreams of building a high-end luxury condo with his name on it like many a narcissistic developer.

The sea level is rising and President Marco Rubio’s plan is to evacuate Miami but Cummings is hell-bent on staying, building higher and placing Layin’ Pipe on top of his tower. But how did we get to this point? Layin’ Pipe has a backstory that involves a party boy (Adam DeVine) who has his boat repossessed live on reality TV in a segment with a few chuckles that ultimately falls flat.

The next set of adventures follows the son of the speedboat (don’t ask how he was conceived), Layin’ Pipe 2. Here, an uncle (Adam Pally) and his nephew (Finn Wolfhard) end up at the home of the infamous Miami provocateur Uncle Luke. This segment as well begins with great satirical promise before fizzling out by not pushing its premise far enough. The Beach Bum this is certainly not, but rather Omniboat: A Fast Boat Fantasia feels like a hastily sketched-together series that might work in bite-size chunks on College Humor. As a whole, the affair is a mix of broad comedy that seems designed only to entertain its creators and their friends (in fact the writer/director of Thunder Road, Jim Cummings, appears to also be in on the joke too per Twitter).

This isn’t to say some passages don’t hold some promise. A VR experience in which participants get to experience what it is like to be the actual speedboat (also a division of the Jim Cummings organization) is just weird enough to work as a midnight short. A post-apocalyptic chapter feels like Kayne West’s recent IMAX art film, Jesus Is King.

Overall, Omniboat: A Fast Boat Fantasia falls flat trying to throw so many things into the blender in an attempt to resist criticism with an IDGAF attitude. I’m not falling for it. This is a deliriously bad collection of shorts by any stretch of the imagination that, like all omnibus films, has its moments. Most of the pleasure actually occurs after the film as the fun guessing game of arguing over which filmmaker directed which segment begins. For true Miami wackiness there thankfully are the great documentaries of Billy Corben–at least he included Mr. 305 in his far more interesting Screwball.