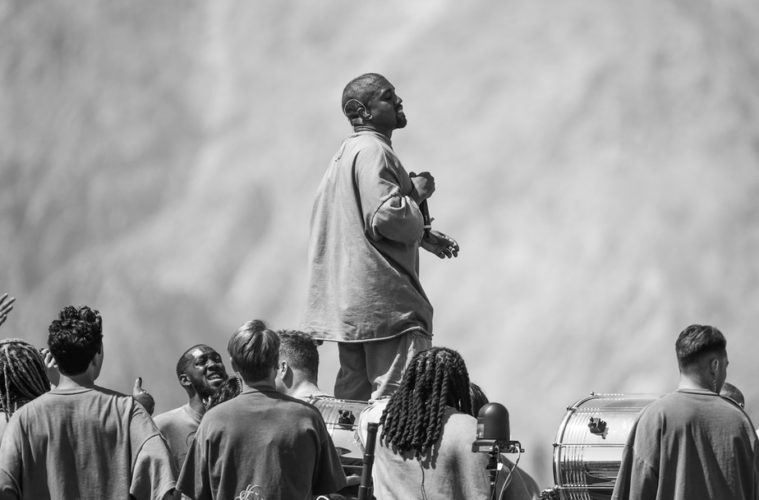 When Kanye West makes headlines, reactions feel inverse to those that normally accompany the newsworthiness of a celebrity. Fans have learned to become worried, for fear of controversy or broken album release promises, and detractors rejoice at the promise of new fodder. Kanye’s recent featured soundbite came at the eve of the release of the long-awaited album Jesus Is King and its accompanying IMAX film, and is completely unsurprising to anyone with any familiarity to its speaker: “I am undoubtedly, unquestionably, the greatest human artist of all time.” While this, alongside historically repeated claims that corroborate his “creative genius,” alongside his polymathic transitions from the music industry into that of other breeding grounds of creativity (television, fashion) as well as some not directly-related (politics) may suggest a dubious confidence, it also implies a nagging insecurity common to narcissists and artists that innovate alike. Kanye West is not perfect, and he knows it. Much of this evidence is buried under the absurdity of his more bankable outbursts, and for every ego-driven declaration of infallibility that gains traction as an easy target of ridicule, there is a reciprocal admission of inadequacy omitted from the discourse. Examples of this dynamic are plainly scattered throughout his career; see the impromptu scribbling overlaid atop the Jackson Hole mountainscape on his 2018 album Ye reading “I hate being bipolar, it’s awesome” and his casually ridiculed mental health discourse on long-form interviews, or even his pattern of breaking release date promises out of fear of not living up to his own standards. The rationale behind his conflicting public images of hubris and vulnerability is complex and hard to decipher–perhaps contributing to the oversimplification of his persona–though this new two-pronged mixed-media project certainly offers some insight.

Musically, the project carries on the volatility of Kanye’s work, reinventing his style to fully embody the gospel music latent in the background of his other albums. This novel focus on religious and spiritual experience quite symbolically clashes with the materialistic wish-fulfillment aspects of hip-hop, as “new ass, new tits” becomes “new walk, new talk” in the previously leaked and eventually revised song “New Body”–which can be interpreted as either a sign of positive growth and maturation or an insecure response to the continued stereotyping of hip-hop as vulgar and irresponsible. Regardless of motivation, these revisions and the overarching use of gospel music implicitly carry with them easily targetable and perhaps problematic discrepancies, and it is important to get those out of the way lest they immediately discount the more valuable aspects of Jesus Is King as a whole. Kanye’s shallow invocation of Christianity provides a nagging criticism. With Christian moralizing in the form of the more popular adages both imbued in the lyricism of its verses and prominently writ in the intertitle transitions within the film, the role of religion in the project seems at once too vague and too specific. The criticism is an easy distraction to some of the project’s accomplishments but not entirely without merit. Kanye’s volatility in reinvention–a side-effect of passion–often blurs intent and foregoes historical research; this, alongside the hefty $20 cost of admission for a paltry 30-minutes of film, feels both exploitative and inauthentic. This potential misuse of Christianity is a common trend in its implementation, which inherently misinterprets some of its base models and have left the religious model flexible, incapacitated.

Even with this in mind, this new project and era of Kanye’s career feels like progress that artistically revitalizes the previously fading genre of music and its symbolic relationship to the black political revolution throughout history. Albeit slightly muddled, it promises to sustain that form of social consciousness and ensure its consumption by a new generation with a strong memory that is often too preoccupied with the present to remember the past. As is the case with the hip-hop genre, lyrics hardly tell the whole story and the experience paints a better picture. To experience is not only to listen, but to collectively reflect on a whole gamut of themes surrounding love, hope, joy, and responsibility–to name a few. These come at the face of shared transgenerational trauma and suffering as a united celebration of culture and heritage. Sonically, the album follows a logical evolution that fully embraces the capacity of Kanye’s music for spiritual deliverance, the same way that 2008’s electronic 808s and Heartbreak, 2010’s My Beautiful Dark Twisted Fantasy, and 2013’s controversial Yeezus respectively act as expressions of sorrow, guilt, and anger.

Jesus Is King combines the traditionally cinematic elements of a visual album–abstract images and episodic editing like other visual albums from Kanye (Runaway) or other artists (Solange’s When I Get Home or Tierra Whack’s Whack World)–with the documentary immersion of traditional concert films. It depicts a performance of “Sunday Service,” a rare and often inaccessible series of performances that made its debut at Coachella and occasionally held ticketed events at local public spaces in major cities. The present, lived-in experience of attending the live event is replicated for remote enjoyment with a new setting–James Turrell’s Roden Crater, a monumental cone of light and space in the Arizona desert built from the ruins of an extinct volcano that joins the disparate realms of art, geology, and astronomy–and elevated by its IMAX presentation. The blaring speakers, heavily layered sound, and widescreen kinetic imagery infectiously focus on performance and are reminiscent of the interactivity encouraged by famous concert films past like Jonathan Demme’s Stop Making Sense. The experience, though brief, returns the model of spectatorship from contemporary private experience to one of shared movement and emotion.

Black bodies in white gowns dance and sing in unison, surrounded by the minimalist brown walls of the volcano that open into a bright blue sky. There is a sense of chronology–progress even, as clouds slowly enter and disappear from the opening like a planet in motion and lights distort the space and transform the choir members into neon-lit silhouettes. It acts as an extension of the ways in which Turrell’s art pieces experiment with psychological visual perception; grandiose imagery with geometrical compositions are both spiritual and scientific, with the same awe-inspiring capacity of Kubrick’s monolith. Kanye, who infamously rapped “I am a God” on Yeezus, now defers to God, whose presence–regardless of belief–can be felt in every image, every note. Kanye relegates himself to the background, occasionally disappearing into the choir. One sequence feels especially vulnerable, with Kanye sweeping around a piano singing honestly and off-key, his voice cracking as he hits higher notes. Occasionally, scenes interrupt the gravitas of the performances and return to the more mundane world, elevated by association: heavy sunlight washes over a field of dandelions, shooting light through thousands of translucent seedheads; a single choir member sings her heart out and sanctifies the audience.