jeen-yuhs: A Kanye Trilogy Review: The Making and Unraveling of a Cultural Icon 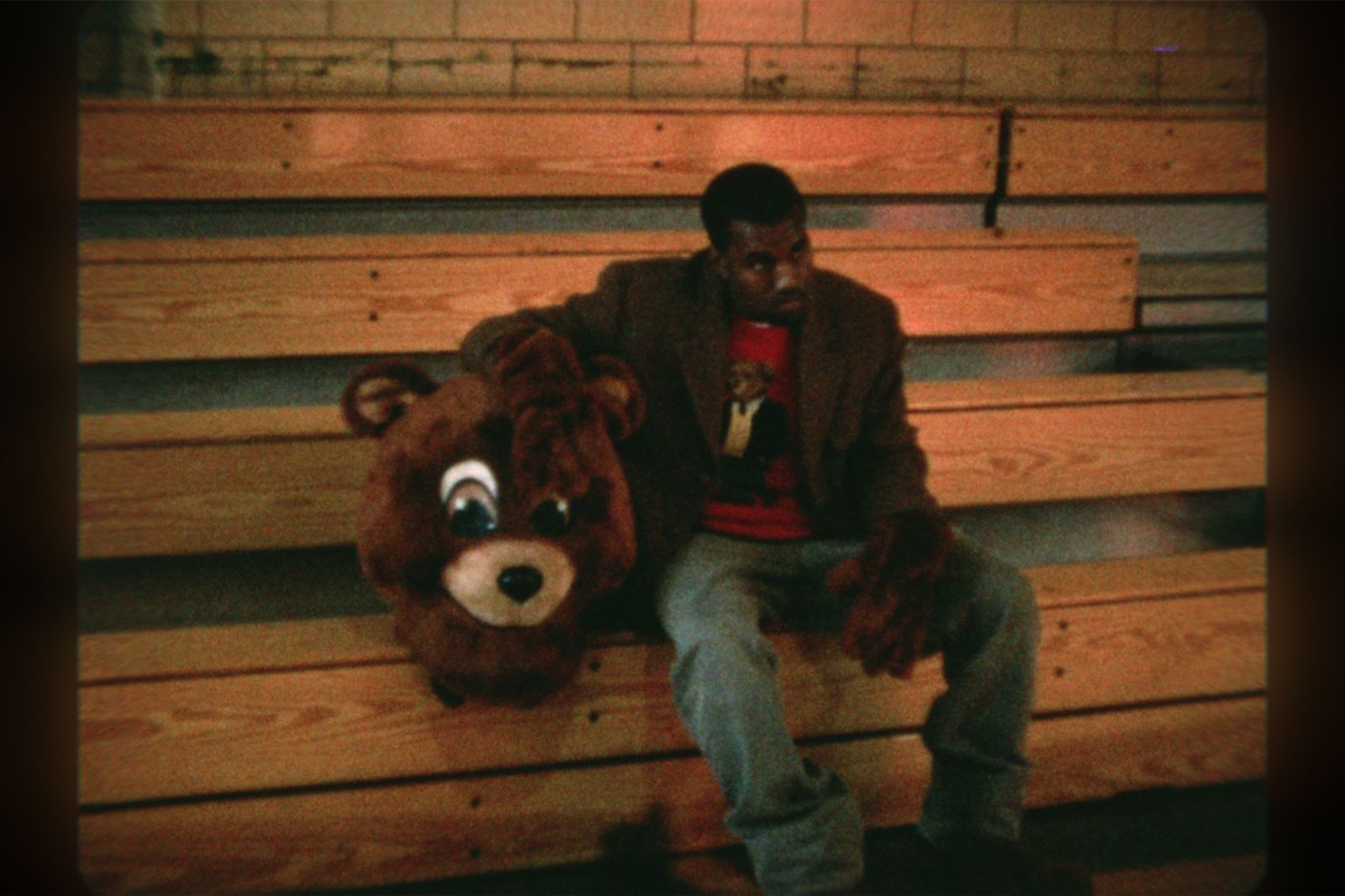 The falsified myth of the overnight success is further solidified in jeen-yuhs: A Kanye Trilogy, a three-part, nearly five-hour documentary by Coodie & Chike, who have captured footage of Ye in fits and starts for over two decades. Structured with gratifying patience in detailing the painstaking ambition required to see one’s dreams come true, its first two “acts”––VISION and PURPOSE––are the most compelling, strictly focusing on his producer beginnings and the long journey of making his 2004 debut album The College Dropout. In exploring a figure as complicated and contradictory as Kanye West, this documentary mostly lets the artist speak for himself through the directors’ own footage, examining the mix of braggadocio and brilliance that slowly got him on the radar of top players in the hip-hop game. The project ultimately falters in its final act, AWAKENING, which moves from intimate to sprawling, attempting to swiftly wrap up over a decade and a half of West’s skyrocketing to a new echelon of fame and controversy. Yet through Coodie’s voiceover, this closing section also carries a resonantly mournful quality for witnessing the rotting away of a close friendship as Kanye’s instability leads to ostracization––the down-to-earth drive that formed his drug-addled cocoon of erraticism and unchecked self-deification.

Coodie & Chike––aka Clarence Simmons Jr. and Chike Ozah––got their start with Channel Zero, a Chicago-based show that was on the forefront of capturing the fertile ‘90s hip-hop scene. It was inevitable a young Kanye West would make his way in front of the camera—in 1998, specifically—and not long after the duo decided to dedicate their time to capturing his journey as their friendship blossomed. The lack of impartiality to his story, for they had a vested interest in his success, makes jeen-yuhs a double-edged proposition: we get Coodie-narrated insights every step of the way and a treasure trove of behind-the-scenes footage as Kanye let them into every part of his life––up to a point––but it also means the documentary can feel lopsided and uneven, with a hesitancy to dive deeper into the artist’s recent mental unraveling and the eventual shape being as much about the Coodie’s life as Kanye’s own. If such personal perspectives can be appreciated, there’s ultimately a nagging sense of incompleteness and slipshod construction in the final section. That chaos may mirror Kanye’s life, but with the directors being mostly pushed out of his increasingly insular world, trying to patch the holes of the story with footage anyone following his career has seen many times over is a stark contrast to the richness of these first two acts.

Nonetheless, for anyone that listened to The College Dropout on repeat, the first three hours are as close as we’ll get to a Beatles: Get Back-esque look at the formation of that masterpiece. We see West desperately trying to get pre-occupied marketing employees at Roc-A-Fella Records to listen to “All Falls Down,” going from desk to desk before eventually being told to shut the camera off. Kanye tries shedding his producer persona, which boxed him into a corner, and we eventually see Jay-Z give him a chance to go into the booth on “The Bounce.” “Closed mouth don’t get fed,” Shawn Carter says, giving Kanye the courage to speak up. He does so with Pharrell, who is astonished when he hears “Through the Wire,” and the same goes for Scarface after hearing a verse from “Family Business.” With Roc-A-Fella still not opening a budget to record the album, Kanye steals bits and pieces of recording time from other artist’s sessions, including going to Jamie Foxx’s home studio to record his “Slow Jamz” parts and visiting Ludacris to capture “Breathe In Breath Out.” Along with seeing the makings of “Two Words” to “Never Let Me Down” to “Get ‘Em High” and more, the footage is frankly astonishing; even if you’ve heard the album a million times, “act ii” is a fount of newfound appreciation, forever changing how one hears it.

Through these first two parts Coodie & Chike capture an artist who has the foresight and drive to presage his eventual status as a global icon. In early interviews we see how he dreams of dropping his last name to achieve worldwide ubiquity and the multi-year battle knowing he had a wealth of could-be classics that no one wanted to hear. His vices are also explored: it goes from innocent to harmful, from picking up porn magazines at a bodega (“I got a little addiction, man,” he tells the camera) in the first act to, eventually, confessing his addiction to percocets and inclination towards suicidal thoughts. jeen-yuhs‘ emotional through line certainly lies with Donda West, Kanye’s late mother. We witness her unwavering support, commending his confidence while still trying to ground her son in reality. Kanye rapping “Hey Mama” in her house as she sings along might be the most touching, sincere footage we’ll ever see of the artist.

“The bigger Kanye got, the further we grew apart,” Coodie says, and after not filming him for six years he was invited by Common to capture a 2014 Chicago concert featuring Yeezy. While their friendship was clearly strained, it led to Coodie becoming intermittently reintegrated into the artist’s life. To see an actualization of the talent-backed, ambitious arrogance that propelled his early career––inspired by “rock stars” like Muhammad Ali, per West––ends up becoming rather haunting in the film’s later sections. Book-ending the film is footage of an isolated Kanye in a Dominican Republic base camp in summer 2020, when he announced he would be running for President. Gone is the dreamy, hazy nostalgic feel of the first two acts as Coodie captures Kanye with a soberingly unfiltered, starkly immediate gaze. As West unintelligibly talks to investors, rants to Justin Bieber, and admiringly watches Tucker Carlson’s commentary from his own unhinged political rally, Coodie realizes this is too uncomfortable to capture and we see multiple times as he puts his camera down. Coodie admits he doesn’t see “eye to eye” with Kanye and attempts striking a hopeful tone to conclude on, but one can’t shake the feeling of this closure being too simplistic and saccharine considering what we’ve seen from the artist as of late, and especially in the final (non-montage) sequence: an erratic Kanye standing on a plane with his eyes closed, repetitively rapping into his phone about wanting to be the President and Pope as those around him seem unfazed, clearly hoping he’ll just sit down.

The juxtaposition between a budding artist doing absolutely anything to achieve one’s dreams and the reality of what they’ve become once on top renders jeen-yuhs more A Face in the Crowd than Get Back. While Coodie & Chike waited years to finally complete this documentary, there’s still a sense this story is incomplete. As riveting as the first two acts are––and an essential watch for anyone who misses the old Kanye––the third is a hit-and-miss collection of frayed relationships, dead ends, and contradictions. If a viewer’s frustrations may be congruous with West’s recent tribulations, it also makes for a haphazard, unsatisfying piece of storytelling.

jeen-yuhs: A Kanye Trilogy rolls out on Netflix through March 2, with act i: VISION available now.