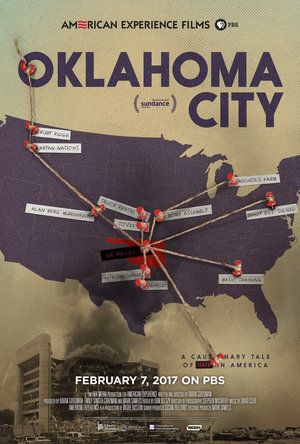 Over two decades after the Oklahoma City Bombing, director Barak Goodman explores the evolution of the hateful, terrorist act in his documentary, aptly titled Oklahoma City. Starting with the bombing and its immediate aftermath, we track back into the past, digging into the resurgence of white nationalism in the far (and then not-so-far) corners of the United States.

The name Timothy McVeigh does not come up until halfway through the film, though his recorded courtroom comments haunt the entirety. The journey there is both interesting and infuriating. We learn of the extremist groups that settled in northern Idaho in the 80s, mostly surrounded by wilderness and seclusion. One of those groups was the Aryan Nations, founded by Richard Butler. Feeding off the promise of an inevitable race war, member Bob Mathews started The Order, a small handful of extremists who carried out violent armed robberies, inspired by the book The Turner Diaries, a white nationalist bible of hate.

Mathews would be killed in a firefight with federal officers in 1984. This was followed by the gunfight on the property of white separatist Randy Weaver in 1992 and, finally, the siege at Waco the next year, in which many men, women, and children burned to death at the hands of David Koresh. Goodman connects these situations in which the government intervened as building proof to the white nationalist that those who run the country were not to be trusted. As writer Leonard Zeskind puts it: “Guns and religion became the twin pillars of the white supremacist movement.” Enter the young, ex-military McVeigh.

The degree to which the filmmakers focus on the hate behind the terrorist act is unexpected, hard to watch, and fascinating. This is equal parts Oklahoma City and the people who were affected and an examination of how someone like McVeigh was influenced by a message of racism and violence.

Jerry Flowers, a police inspector who was part of the rescue effort, recounts some of the horrors inside the building in the moments after the bombing. Archival news footage also recalls that in the first hours and days following the event, many assumed and suspected those responsible to be from the Middle East, a difficult ignorance to swallow. Goodman moves mostly chronologically and procedurally through it all, using the white nationalist movement as the anchor. It all feels unbelievably relevant in the year 2017. The hate and fear lives on, and continues to burn bright.

Oklahoma City premiered at the Sundance Film Festival and opens in theaters on February 3 before airing on PBS on February 7.