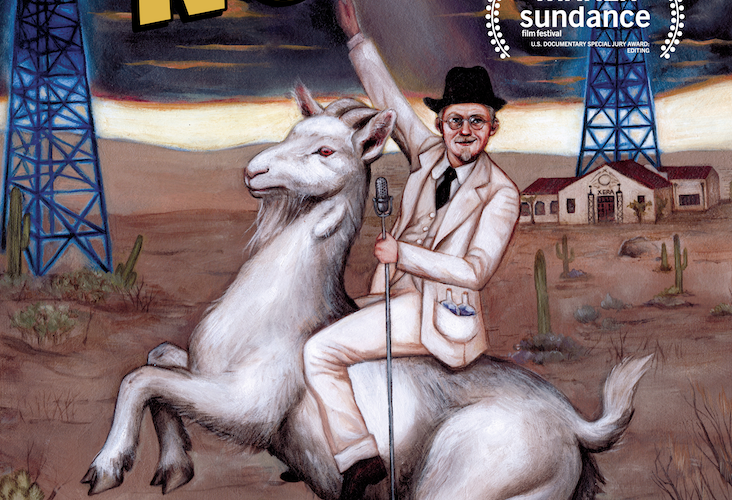 A story so absurd it requires animation to be told, Nuts!, directed by Penny Lane, continues the filmmaker’s interest in personal histories, following her 16mm found-footage documentary Our Nixon. Collaborating with writer Thom Stylinski, Lane’s entry into the material is initially her subject, John Romulus Brinkley. He crafted an impotence cure, grafting a thin piece of a goat tactical gland onto a human male phallus. This is a starting point of folksy curiosity, born from the kind of training one gets at the Kansas City Eclectic Medical University.

A wild and sympathetic look at medical quackery, Brinkley devotes much of his career to magical cures, some of which we might commonly think of as placebo. Lane’s touch is lighter and more playful than its subject matter may require, added by the rough animation, articles and narration provided by Gene Tognacci.

Setting up shop in Milford, KS (a town we later learn was flooded for a reservoir) Brinkley set about to create his own mega hospital. The empire grew and eventually led to investments in radio, growing the kind of empire current quacks Doctor Oz and Doctor Phil could only dream of. The expansion was thwarted by an early incarnation of the FCC and Morris Fishbein, head of the Journal of American Medicine. Feeling the political pressure, Brinkley tries his hand as a write-in candidate for Kansas governor, a plan foiled by the attorney general who specifies just how his name can be written in.

Making a beeline for the Texas-Mexico border, Brinkley sets up a cross-country operation again circumventing the FRC/FC. He builds a powerful tower called XERA in Mexico and phones in his broadcasts from his home in San Juan, Texas. XERA, with a 1-million WATT broadcast capacity, allegedly can reach 17 countries – naturally a cause for FCC concern.

Setting up shop in Texas, he peddles tonic water and creams that he believes can cure cancer. Eventually his old nemesis, the medical establishment and Fishbein, catch up with him and much of the film’s third act is spent in court with all the twists, turns and drama you’d expect from a very strange story.

One of Penny Lane’s best pictures, Nuts! is quite a brilliant way to tell a peculiar story. Condensing a lot of material into a brief running time, this format allows certain liberties to be taken, particularly when imagined conversations appear. Inspired by a commissioned biography The Life of a Man by Clement Wood, which Brinkley claims in court to not have read, this is far from a dry, straight-forward medical procedural. Nuts! gleefully lives up to its title.

Nuts! premiered at the 2016 Sundance Film Festival and opens on June 22.