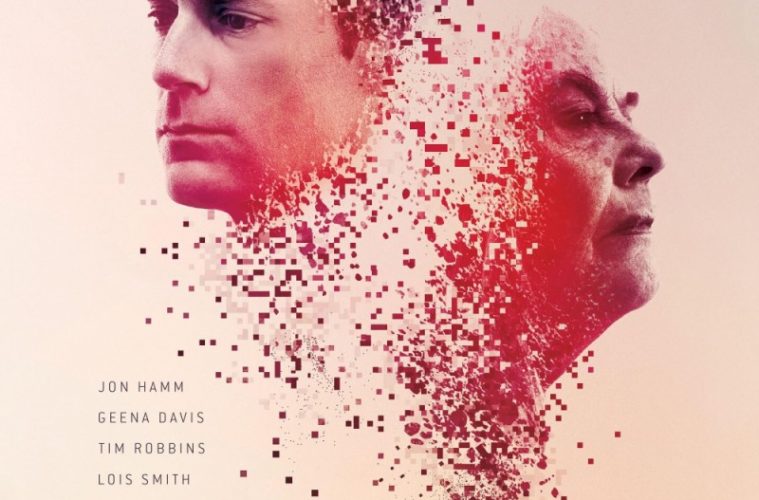 Humanity’s most invaluable asset is our memory. It fuels our imagination, ignites conversations, and can unite us. It can also be distorted, reshaped, and forgotten altogether. Marjorie Prime, a micro-scale sci-fi chamber drama, fascinatingly explores the perception and dissolution of what we remember throughout our lives. Michael Almereyda’s contemplative new film, which could double as the best-written episode of Black Mirror yet, most poignantly serves as catalyst for a personal self-reflection on the part of the viewer.

Adapted by Almereyda himself from Jordan Harrison’s play, it opens on the 86-year-old Marjorie (Lois Smith) — presumably around the year 2050, based on a pop-culture calculation courtesy of My Best Friend’s Wedding — talking to a man on her couch (Jon Hamm). With his cold, calculated manner of response, we soon learn he’s actually a hologram of her late husband. (Think the most advanced version of Alexa.) Presumably purchased by her child, Tess (Geena Davis), and son-in-law, Jon (Tim Robbins), to keep her company, the computerized version has no transfer of consciousness. Rather, those in its company must recall their own memories to build up the brain of the Prime to assist with future exchanges.

This conversational aspect of recalling one’s own experience is the basis of nearly all of the film’s dialogue. Coupled with Marjorie’s failing memory, once the Prime version learns something — whether it’s true or false — it now becomes the roadmap for whenever it’s asked to recall. If one doesn’t like how they were proposed to, how about pretending it was after a romantic evening seeing Casablanca? If you are grief-stricken over your son who committed suicide, do you have to remember him at all?

Played out in a calm, low-key manner, Marjorie Prime can be most compelling in the ways it prompts contemplation about one’s own life experience. Reminiscent of a Rorschach test, one can find themselves drifting out of the near-constant dialogue to ponder how they remember their life and which memories they perhaps subconsciously retain. Tess explains how we’re never actually remembering the source of the experience, rather the memory of a memory each new time. As years go on, details shift or get replaced, leaving an all-new memory — one that potentially could be false. But is there harm in this comfort?

Smith, the film’s backbone, brings a humanity as she struggles with teaching the Prime what to remember. Both her joy and confusion in recollection are rendered effectively across from Hamm, who feels born to play this robotic, unfeeling hologram. As Jon, Robbins also does impressive work, especially in a difficult conversation with Hamm’s Walter. They discuss a tragic moment in their family history and how inebriation can loosen one up to discuss such hard truths — an impossibility for Walter as Primes will never be truly human.

The cinematography from Sean Price Williams, normally known for his kinetic camera movement in the films of Alex Ross Perry (setting aside their most recent collaboration), honors the format of the play, primarily using static, stately composed shots in (mostly) one location. Along with Beethoven compositions and a track from Richard Reed Perry and Bryce Dessner, Jackie and Under the Skin‘s Mica Levi offers a more classical, string-heavy score, mostly used in transitions and then for maximum impact in the finale.

“I won’t let you die,” Jon tells Tess, trying to mend one of their questions with an easy, patently false answer. In Marjorie Prime, death comes unexpectedly and swiftly. We can’t decide what life will bring — an inquiry brought up in a bittersweet flashback — but we can choose some of the memories we want to create and how they will be communicated. As such, this is a film that will offer up as much as one wants to bring to the table.

Marjorie Prime premiered at the Sundance Film Festival and opens on August 18.