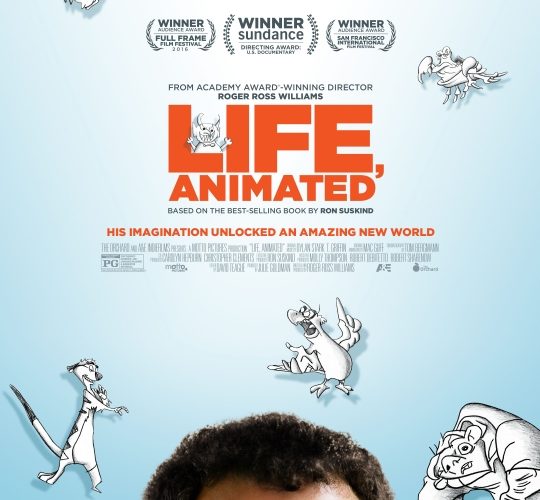 Another uplifting, inspirational documentary on the subject of autism and one family’s struggles, Life, Animated follows the story of the Suskind family and the son of Pulitzer Prize-winning journalist Ron Suskind, Owen. Ron, in direct address, tells us the painful story of Owen’s decline, from a happy child to one with failing motor and social skills at age three. Like last year’s Sundance hit How To Dance in Ohio, Life Animated is a personal portrait of youth and family afflicted by autism. Providing some comfort to affected families, Owen slowly learns to live on his own, he falls in love, gets his heart broken, lands a job and helps others in his community.

Although he doesn’t yet resort to online dating as seen in Julie Sokolow’s witty Aspie Seeks Love (a film that was on the festival circuit last year that is worth mentioning alongside How To Dance in Ohio), Owen finds his voice in the films of Walt Disney, memorizing all of the animated classics as a means of expressing himself. At a local support center he hosts a Disney group, which later includes some celebrity guests in a hilariously uplifting passage.

Directed by Roger Ross Williams (God Loves Uganda) in collaboration with the Suskind family (Ron Suskind shares a writing credit and his graphic novel inspired the film), Life, Animated is largely straight-forward in form, blending cinéma vérité with interviews and animation. Where the film succeeds and breaks new ground in the genre is its incorporation of the personal psychology of Owen. While How To Dance in Ohio and Aspie Seeks Love discussed mechanisms for coping and understanding the condition and strategies to succeed, Life, Animated takes this one step further. Expressing himself in animation, Owen exudes an interest in animated film sidekicks, drafting a graphic novel about characters searching for a hero.

The film centers upon Owen’s transition from his home to semi-independence in a private apartment in a support community. Moving near his girlfriend Emily, he hopes to officially start his adult life, applying for a job at the local Regal Cinemas and having date nights with Emily. His brother thankfully broaches the subject of intimacy with him, unsure how to explain adult themes because Disney has simplified relationships into a kiss at the end of the picture.

An optimistic portrait of a family and personal struggle with autism and adulthood, Life, Animated is a unique exploration of themes we’ve seen in several other documentaries on the subject. Every struggle is personal and here we’re presented with how a family of means gets their son the help he needs. It seems as if the stories involving autism that we’re never confronted with are those afflicted in lower/middle class families that do not encourage artistic endeavors cope, develop and receive services; I imagine these stories are significantly less rosy. Life, Animated, like Owen, is optimistic and should provide a measure of comfort for the many families affected by a complex disorder – such stories are essential to share.

Life, Animated premiered at the 2016 Sundance Film Festival and opens on July 1.