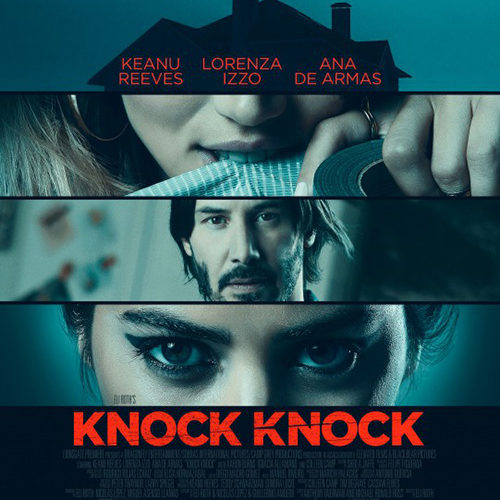 With his tirelessly brutal movies, Eli Roth isn’t for everybody. Hostel and Hostel II aren’t exactly easy watches, but Roth does what he does well, even if it’s not one’s cup of tea. The filmmaker’s work is at its most enjoyable when there’s a playfulness to the horror, which is why Roth’s latest, Knock Knock, a thriller full of laughs, is his most entertaining picture to date.

When Evan Webber’s (Keanu Reeves) wife and kids go to the beach for the weekend, the architect is left on his own to get some work done. On a stormy night, there’s a knock on the door. At Evan’s doorstep are two beautiful young girls, Genesis (Lorenza Izzo) and Bel (Ana de Armas), lost on their way to a party. When it comes to tempting the married man into a threesome, the girls are about as subtle as Clint Eastwood, and eventually the hesitant Webber gives in. The next morning he feels regret, but soon he’ll suffer through far more than guilt. Knock Knock, for the most part, goes where expected. It’s a well-known yarn, but the film is energetic enough that its familiarity isn’t an issue. There’s a gleefulness to this morality tale. The violence is actually fairly tame, often going more for laughs than gore. Although the film is mostly broad in tone, Webber and the girls do register as human beings. Reeves, Izzo, and Armas’ performances are often big, but the trio never go so far they leave reality.

Casting is what the film gets the most right. Izzo and Armas are a blast to watch, bringing two completely different energies to their villainous roles. They nail the two different performances they have to give: what Evan sees at first and then what he gets. They have an excellent manic chemistry together. As for the never aging Reeves, he’s still on a hot streak. Reeves makes one root for Webber to make it out of his predicament, even after his terrible mistake. Despite the working humor, the film could have pushed the horror and danger a bit more. At the beginning Webber plays “monster” with his kids, and by the end, the impression is Roth wants him to literally become a monster. The film doesn’t go all the way with that idea, which is somewhat of a disappointment, but it only becomes a minor problem when the “monster” is mentioned in the third act.

With a mixed bag of a script, the contrivances and forced exposition stand out, but Roth’s giddiness, the well-executed jokes, and the three performances are not overshadowed by Knock Knock‘s problems. Hopefully Roth continues to make movies this playful.