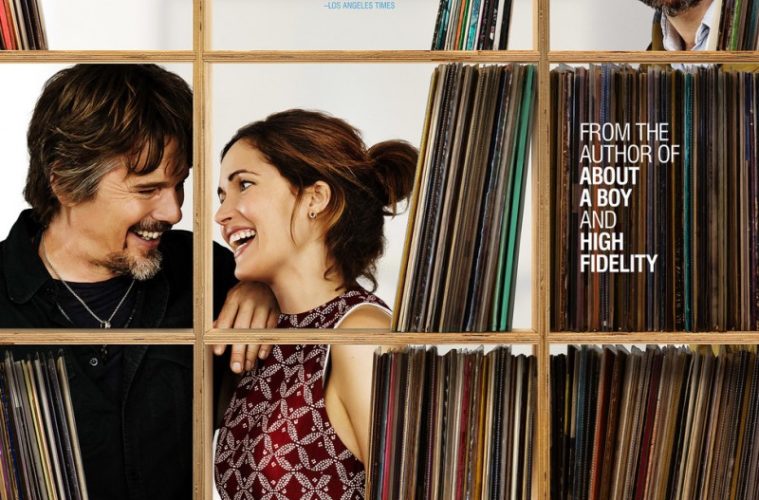 What if Troy Dyer from Reality Bites put out one, cult sad sack album in the 90s and then disappeared? Such is the spark of Juliet, Naked, a nifty crowd-pleasing three-hander from Jesse Peretz, based on the Nick Hornby novel of the same name. The forever charming Rose Byrne stars as Annie, a forty-ish woman living in a solitary seaside town in England with her boyfriend Duncan (Chris O’Dowd), a teacher who’s obsessed with recluse musician Tucker Crowe (Ethan Hawke). In fact, Duncan runs a fan site for and populated by fellow Crowe obsessives, all fantasizing and mythologizing on potential shelved masterpieces, wayward gossip, and countless interpretations of his sole album Juliet.

When Duncan is gifted with a demo entitled Juliet, Naked, featuring raw recordings of the same old tracks, an annoyed Annie retaliates with a negative comment on Duncan’s website. Her words prompt a positive reaction from Crowe himself, and a secret correspondence begins. A hefty amount of this film’s success is in the casting. Hawke is perfect as Crowe and perfectly juxtaposed to Byrne. The Sundance vet offers a softness that takes some of the edge off his character: a deadbeat dad times four doing his best far too late in the game with his fifth child Jackson (an adorable Azhy Robertson). O’Dowd is left in a lurk a bit, saddled with a rather incomplete arc with which he does as much as he can. Byrne alone is reason enough to see this film. Continually impressive throughout, she takes a lead role with limited dynamism and infuses plenty to latch on to.

Peretz has always been a humanist filmmaker and this material suits him. The screenplay, credited to many (Tamara Jenkins, Evgenia Peretz, Phil Alden Robinson, and Jim Taylor), plays scattershot at times, but the director does well to keep the focus on his leads. Hawke and Byrne are given the most screen time and their chemistry is built of an interesting alchemy: not particularly explosive, but casually aligned. Both are playing middle-aged people in need of new direction in starkly opposite ways. Even their acting styles compete a bit, Hawke a bit subdued and Byrne a bit performative. Their exchanges feel honest for a duo that may not be perfect for each other but are perfect for their present circumstance.

Conveniences abound on the road to an ending, oversimplifying some complicated elements to an unfortunate degree. Despite this, there is a quality to these performances and an earnestness to the filmmaking that’s more than enough to recommend.

Juliet, Naked premiered at the Sundance Film Festival and opens on August 17.