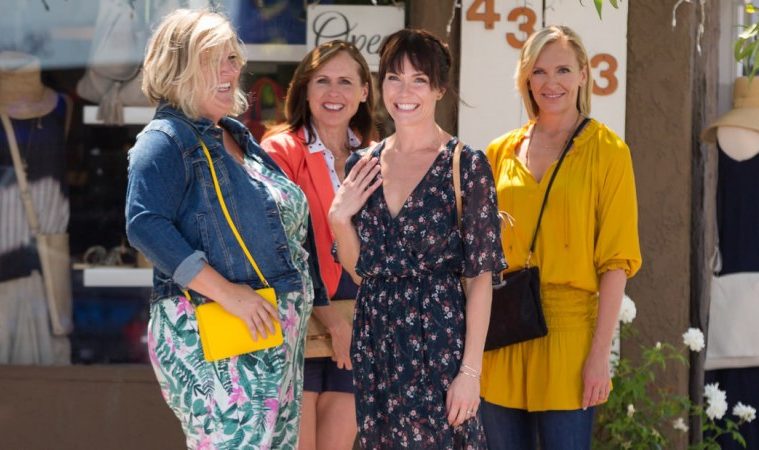 Hot on the heels of the studio comedy hit Bad Moms comes Fun Mom Dinner, an indie-fied, but no less broad version of mom’s night out from director Alethea Jones and screenwriter Julie Yaeger Rudd (wife of Paul). Despite a stacked cast and some impressive physical comedy, this film slips into ridiculousness without the laughs to back it up.

We meet four moms — Emily (Katie Aselton), Kate (Toni Collette), Melanie (Bridget Everett) and Jamie (Molly Shannon) — whose kids all attend to same pre-school. Kate’s got a solid, rebellious thing going on with her husband Andrew (Rob Huebel), her only mom friend being Emily, with whom she went to college. Emily is new to town and wants to please everybody, while her distracted husband Tom (Adam Scott) could care less. Melanie takes parenting a bit to seriously at the school and Jamie’s getting a divorce. The four get together for a… well, you know what… and things get crazy.

The MVP here is Everett. Loud and wild and firing on all cylinders, when she’s front and center the movie works (up until the third act, at least). And while Collette, Aselton and Shannon are all national treasures in their own right, they are mostly wasted here by lazy dialogue, off-kilter pacing and a strange mixture of real-world marital problems and other-worldly, sitcom-esque encounters. And then there’s Adam Levine, who shows up to deliver the worst performance at the 2017 Sundance Film Festival. Playing Luke, a horndog bar owner who fancies himself a philosophical stud, the singer/reality star/actor(?) brings this picture to a screeching halt about halfway through, delivering each of his lines with the conviction of a cardboard box.

Throughout, we cut between the quartet of moms and their misadventures and a duo of dads made up of Tom and Andrew, who get themselves in a pickle while watching the kids. Some of Scott and Huebel’s exchanges hit before the narrative quite literally leaves the two actors out in the cold. Jones and Rudd seek to explore the edgier parts of motherhood and marriage, and though some of the discussion points work nicely in the hands of these great performers, too often does the film rely on explicit gags that feel out of place, unnecessary and mostly unfunny.

Fun Mom Dinner premiered at the Sundance Film Festival and will be released in theaters and on VOD on August 4.