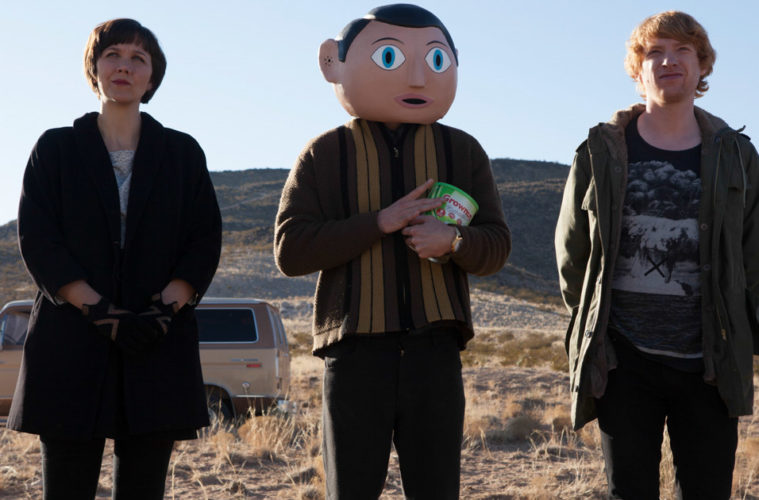 There’s no definitive path on the unwieldy journey that is the creative process. We’ve seen countless films tackle various approaches in an attempt to find an answer, but it’s never quite been done in the vein of Lenny Abrahamson‘s peculiar, occasionally aimless, and ultimately resonant Frank. While the initial draw is perhaps Michael Fassbender in the role of our strange title character, loosely based on the late Chris Sievey, our focal point is that of Jon (Domnhall Gleeson), whom we meet as an aspiring musician who can’t seem to conjure any worthwhile lyrics. While on a post-work jaunt alongside the beach to stir the imagination for his music, he comes across a crazed man intent on drowning himself, soon revealed to be the keyboardist in a band, Soronprfbs, that’s stopping by his town. An offhand joke from Jon turns into a formal invitation from their manager Doug (Scoot McNairy) to replace their ailing member at their gig that night. Another gig turns into a year-plus isolation at a Dublin cabin to record their next album. It’s here that our journey truly begins.

Writers Peter Straughan (Tinker, Tailor, Soldier, Spy) and  Jon Ronson (The Men Who Stare at Goats) never foreshadow the band’s trajectory, rather letting us experience the many unexpected moments through the eyes of the band’s newest member. While some of the path can feel narratively purposeless, it’s no doubt a genuine emotion of the band as they try to create great art. The balance of whether or not their music could lead to acclaim, and if they’d even want it, is also delicately handled. Will Jon’s frequent social media updates (perhaps the most accurate handling in a film I’ve seen) lead to a dedicated following? Will an opportunity at South by Southwest result in stardom? Abrahamson eventually tells us the answers, but he’s far more interested in dissecting the intricacies and dynamic of a band along the way. It’s these individual artists that come together to craft something extraordinary, including Clara’s (Maggie Gyllenhaal) intent to stay true to her passions, and most vitally, Frank’s mysteriousness at the center keeping us engaged. Complete with a fake, papier mâché head on at all times — yes, even in the shower — we see his brilliance shine through, whether it be creating a song about carpet tufts on a whim, or changing someone’s entire mood for the better in an instant. But this is juxtaposed with his days of isolation in his room hitting a ball against a wall, or random outbursts. This back-and-forth is part of the sneaky skill behind the make up of his character and while the journey can lag, the emotionally-fueled ending is one I can see resonating for a long time to come.

Abrahamson takes a fitting, non-descript approach behind the camera, letting our eccentric characters play (and fight), but praise goes to Nathan Nugent for his sharp editing, often used to comedic effect. The band’s struggle with creating outsider art vs. something more “likable” is full of original moments, all due to their unexpected nature. It’s not easy create something great in any medium and Frank shows us through all the punching, kicking, screaming, and even death, something beautiful can be formed in the end.

Frank premiered at Sundance Film Festival 2014. One can see our full coverage of the festival below.