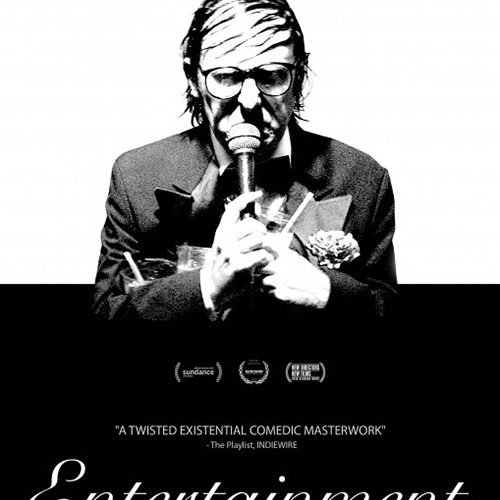 Director Rick Alverson makes some scary comedies. His previous endeavor, The Comedy, showed us the horrors of aging trust fund babies, making for an excellent, funny and headache-inducing result. The challenging experience that is Alverson’s latest film, Entertainment, makes The Comedy feel like a walk in the park.

The comedy, which he co-wrote with star Gregg Turkington and co-star Tim Heidecker, follows a bottom-of-the-barrel comedian (Turkington) traveling from gig to gig across the California desert, performing genuinely funny and crude jokes that aren’t for everyone. But then Alverson’s not telling stories for everyone, making his films stand out all the more. Nobody today is writing and/or directing comedies like Alverson, even if most people wouldn’t place his films in that genre. Some refer to them as “anti-comedies,” but they’re nothing of the sort. This is comedy, it’s just that humor comes out of the horror, the mundane, and pain found in Alverson’s worlds. Entertainment is nothing but mundane — beautiful desert landscapes have the life sucked out of them by the comedian’s humdrum personality.

Imagine Hal Ashby’s Being There but if it followed a character nobody was interested in or loved. The comedian is somewhat of a ghost, wandering through the desert with no drive, aspirations, or goals. He’s clearly not comfortable with his life, but he won’t put in the effort to make a change. It’s a character with little personality that is still, somehow, fascinating. We know the comedian has a daughter, but little else about his life. Then again, does he even have a daughter? She never answers or returns his desperate calls. If he does have one, then we learn why she doesn’t talk to her father without her ever appearing. The comedian is not a pleasant character. The one friend he has, a fellow entertainer played by Tye Sheridan, he brushes off. Most of his interactions come down to hecklers or a successful cousin (John C. Reilly). The comedian doesn’t share his life with anybody. Then again, what life is there to share?

Most of the protagonist’s encounters are nightmarish and the unpredictable narrative provides a danger to Entertainment. There’s an uneasy encounter the comedian has with a possible criminal and drug addict (Michael Cera) that’s genuinely unsettling. The scene is a tangent, which there are a multitude of in Entertainment, and maybe a bit too many. That encounter is a reminder, though, that Alverson doesn’t need any murder or monsters to frighten his audience, which is a true skill of his.

Every second of the 102-minute running time is felt. We’re trapped with this character on his never-ending journey, one that makes for an unpleasant watch. Yet the pace, imagery, and Turkington’s compelling performance add up to an unnerving comedy. Entertainment is the kind of film one never has to see again, but will be better off for having seen it.

Entertainment premiered at the Sundance Film Festival and opens on November 13th.