Sundance Review: ‘Divine Love’ is a Strange, Alluring Exploration of Faith in the Near-Future 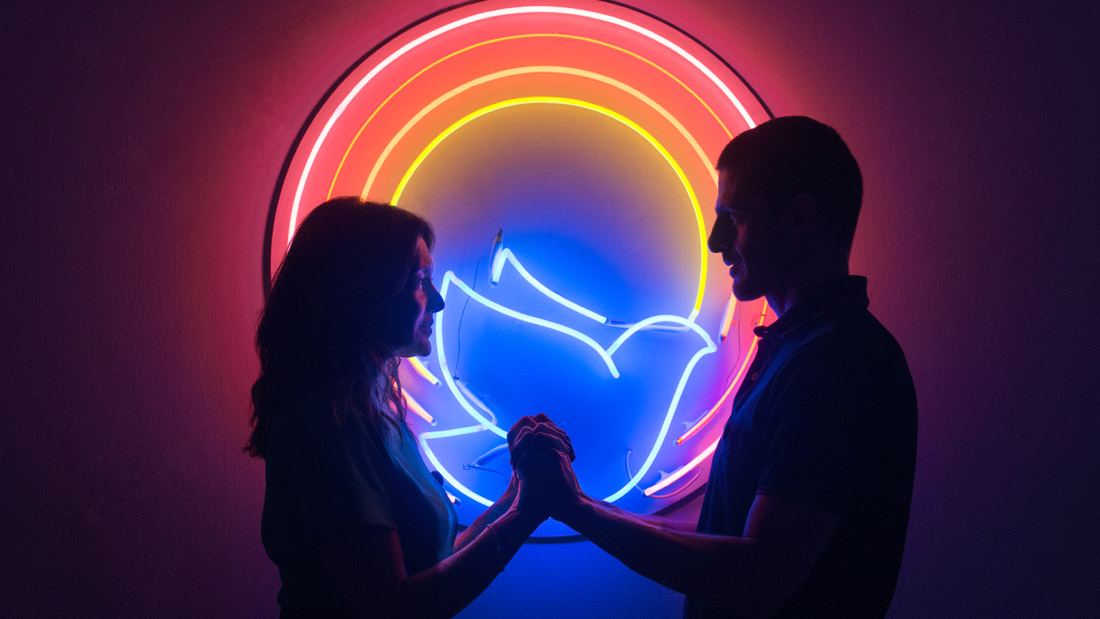 Last year’s Sundance Film Festival opened with Tamara Jenkins’s Private Life, a thoughtful, witty drama exploring the struggles of infertility faced by a couple in New York City. Premiering at this year’s festival, Gabriel Mascaro’s strange, alluring Divine Love examines similar hardships, albeit in an entirely different place, time, and aesthetic conceit. Set in the near-future of 2027 in Brazil, Joana (Dira Paes) is a deeply religious woman who is trying to conceive a child by any means necessary. Through his exquisite vision, Mascaro tells a curious tale of spiritual commitment, marital strife, and the blurred separation of church and state, leading to an ultimately surprising, powerful conclusion.

After sprinkling magical realist touches in his prior film Neon Bull, the director’s imagination is once again deployed with full force here. With it being only eight years in the future, his predictions are rightfully minor but artfully woven into the environment for maximum realism. He imagines a city that is more industrialized (and polluted), with factories crowding the once-pristine beach vistas. In a dystopian fashion, the population is also more strictly controlled as metal detector-esque machines detect any unregistered fetuses–a constant reminder for Joana of her infertility. In her job at a notary for the government, she specializes in divorce documentation, which directly conflicts with her religious beliefs. She perpetually wishes of a hopeful reunion for her clients, attempting to convince them of the spark their relationship once had and to get back together, which is in direct conflict of the government’s separation of church and state.

To help her reconcile the brokenness and pain in her day job, as well as the struggles in having a child, she regularly visits her pastor, which in the future can be communicated with through a drive-through car service, in one of the film’s most memorable, well-devised scenes. While her husband Danilo (Julio Machado) is never seen partaking in this sort of spiritual healing, he does join her in Divine Love, a group strictly for couples working through marital issues and infertility challenges. What begins with Bible readings, trust falls, and baptisms soon escalate to something far beyond the norms of church-going that is best left unspoiled. If it wasn’t conveyed so sincerely, it is almost satirical how the director shows conservative beliefs hypocritically leading to sexually progressive acts.

Even as these meetings get more and more peculiar, Mascaro excels in finding the sweet spot between selling the unusual paths of the story and the affecting, heartfelt spiritual foundation of Joana’s journey. The eroticism of Neon Bull is carried through here with a reverence for the unexpected lengths in which Joana and Danilo will go to conceive. A device is also purchased to increase the healthy sperm output of Danilo, whose job is running a flower shop–an intriguing dichotomy of bringing joy and life to customers when he can’t do the same in his own home. Not unlike the connection Joana feels in her faith, Mascaro’s affectation for his characters and their plight are deeply felt throughout. On paper what could have been exploitive is rendered with care and fascination.

Reteaming with cinematographer Diego Garcia (who also brought such pristine beauty to another recent Sundance title, Paul Dano’s Wildlife), he once again charms with a neon-lit color palette as church walls glow with an attractive pink and blue hue, perhaps a predictive nod to disarming the Christian iconography of cathedrals. With a gliding camera, Mascaro and Garcia also know the power of an unbroken master shot, often letting emotions play out and feelings simmer, resulting in intense intimacy. The few locales seen within Brazil also have slightly futuristic architecture, reminiscent of Spike Jonze’s work in Her.

The most interesting thread of Divine Love is presenting a world where deeply religious people don’t actually believe in the prophecy they’ve been preaching. When Joana stumbles upon a revelation in her life that has immense consequences, those around her fall into predictable rhetoric, doubting her convictions. Without ever letting his personal political and religious inclinations overtake the humanity of his characters, Mascaro’s film subtly shows the beauty that can be found when we tell a story of struggle with an open, earnest perspective.