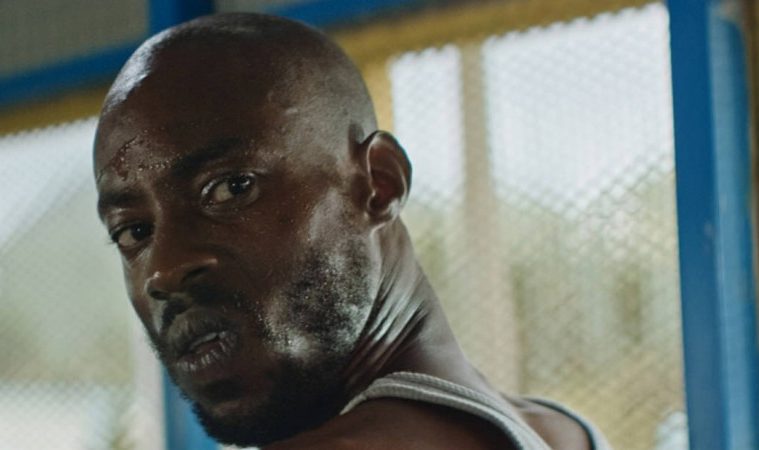 What starts as an institutional romance quickly becomes something altogether different in Carpinteros (Woodpeckers), a drama-turned-prison thriller from the Dominican Republic that opens, like many a prison picture, with a gut punch. Julian (Jean Jean) arrives at the Najayo Prison finding himself hazed at every turn. To earn his keep he serves as a tradesman cooking and repairing equipment. For protection he links up with Manaury (Emilo Candelario) a jailhouse powerbroker that deals drugs right out of the kitchen supply cabinet. Manaury is in love with Yanelly (Judith Rodriguez), a prisoner in the women’s compound across the way; they exchange notes, pictures, and soiled panties through a complex system of smuggling as some craftsman are sent to work in the women’s area.

The lovers communicate with each other through sign language, under the guard’s radar, trading glances, flirtations and vows once released. Manaury is on the outs with Yanelly, allegedly for flirting with other women while she was in solitary confinement, forcing Julian to work to smooth things over.

Filmed on location in the actual Najayo Prison and lensed in ultra wide-screen by Hernan Herrera, the film springs to life with immediacy and bursts of energy, although it’s not quite as successful as David Mackenzie’s Starred Up in terms of its unease. For much of the second act, the Jose Maria Cabral-directed drama feels like a high school romance where parting glances evoke desires and one runs the risk of getting in trouble for passing a note. Institutions reap institutional behavior and this prison is no different: the gangs have their place along with the women and the only time they seem to meet is in music class.

The desire becomes physical when Julian is dispatched to fix a faulty air conditioner in the women’s prison and is able to steal a kiss while Yanelly’s girls create a small distraction. Yanelly is soon reprimanded for participating in what officials call “pecker talk” with the men on the other side. She will soon be out and free to do what she wishes once her divorce is settled. Her plans include being with Julian, Mananury be damned.

Carpinteros’ third act, as exhilarating as its build is, seems to abandon the social realism at the core of the picture, falling back on tired and true genre storytelling that feels like a mismatch between the film’s opening sequences. Where Carpinteros works is in its exploration of desire from afar as a passing glance can make one’s day. It’s enough to give you butterflies in your stomach but, like all things in prison life, there’s no certainty even on the most mundane days.

Carpinteros (Woodpeckers) premiered at the Sundance Film Festival and opens on September 15.