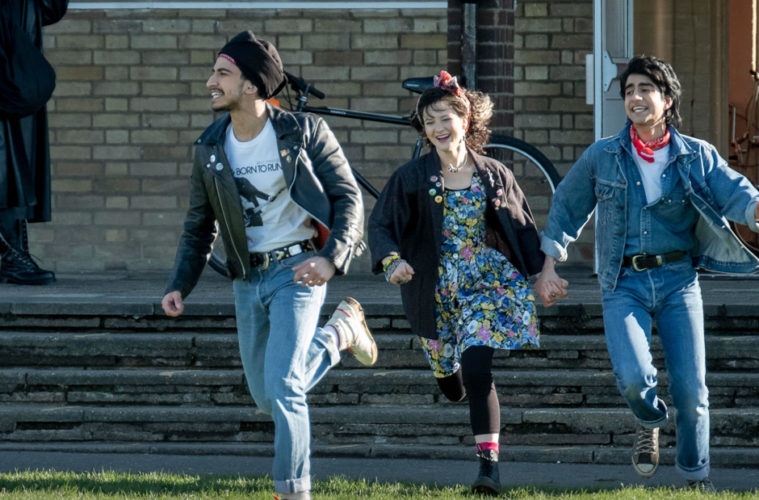 Sundance Review: ‘Blinded by the Light’ Has Heart But Falls Flat

There is so much passion, so much love behind (and in front) of the camera in Blinded by the Light that it makes this negative review rather hard to write. Directed by Gurinder Chadha (Bend If Like Beckham), the film tells the story of Javed (Viveik Kalra), a Pakistani high-schooler living in Luton in 1987. Thatcher is prime minister, the economy is in flux and racism is alive and well in this town north of London. Javed dreams of leaving, finding some modest joy in writing up lyrics for his buddy Matt (Dean-Charles Chapman), with whom he grew up.

It’s when his Sikh classmate Roops (Aaron Phagura) lends him two Bruce Springsteen cassettes that everything changes. The Boss speaks to Javed, the lyrics literally popping on the screen. As songs like “Born To Run” blare on, a new set of goals emerge for the young man; a fresh look at what’s possible. When Bruce is playing in his ears, Javed’s not thinking about his overbearing father (Kulvinder Ghir) or his white supremacist neighbors. Soon enough, he’s dancing down the halls of his school, finding the confidence to ask out his crush Eliza (Nell Williams). He makes decisions, responds to threats quoting Bruce lyrics.

This is earnest stuff that has the potential to be very affecting. And while the energy of the music is very present, often it feels like the music is doing most–if not all–of the work. Too much of what happens here rings false and forced. Despite all of the heart, there is not enough in the execution. Chadha has clear, lofty ambitions with this tale. Real-world issues of substance and immediacy mesh with musical moments and fantastical comic beats in way that’s tonally aggravating. Character beats are often simplified to an unrealistic degree.

Consider Rob Brydon, who puts in some broad work as Matt’s father. In one scene he sings along with Javed to Eliza just at the moment we are meant to think everything will go bad. Same goes for a crusty old neighbor, whose change of heart comes with a line so expositional it might as well be written on screen along with the lyrics. Hayley Atwell’s presence is welcome in a few scenes as Javed’s supportive teacher, though she serves mostly to propel the narrative forward.

The pace picks up quite a bit in the film’s third act, working hard to wrap everything up. It’s extremely rushed and convenient, but by then Blinded By The Light will have either won or lost its viewers. Despite the reservations, one hopes this film does find its audience.

Blinded by the Light premiered at the Sundance Film Festival and opens on August 16.