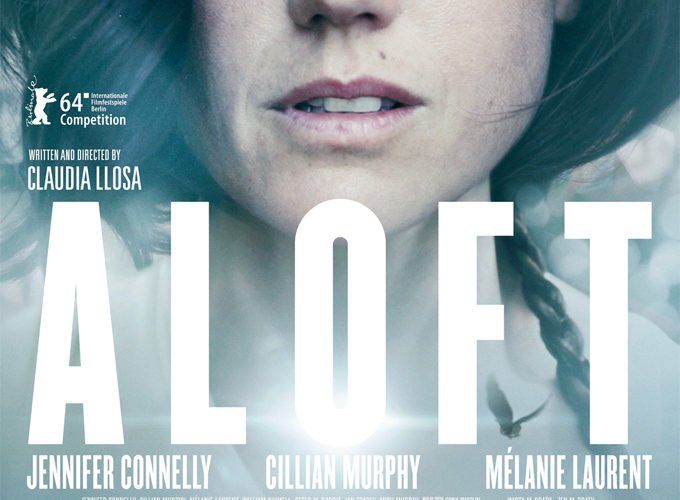 A tough nut to crack, Aloft is a poetic drama exploring a rather abstract issue: that line between faith and the openly observable. Written and directed by Claudia Llosa (The Milk of Sorrow and Madeinusa), the themes that she’s worked with well in her native Peru just don’t seem to translate to North America. Perhaps it is because the ambition of the film aims to circumvent character development in place of rhythm and poetry. The issue at hand is that Aloft, perhaps as a compromise, attempts to have it both ways.

Jennifer Connelly plays Nana Kunning, a young mother who attempts to heal her son Ivan (Zen McGrath), when something goes terribly wrong in the film’s opening: the boy’s falcon destroys a fragile structure made of tree branches used in the healing (ah, metaphor!). Nana grows closer to the healer, becoming his deputy. Alienating her family in the process, Nana has grown to become a quasi-cult leader herself and unlike Dr. Oz, she’s a recluses refusing to give interviews. Cut to 20 years and later and enter Ressmore (Mélanie Laurent), a gorgeous journalist working on a documentary and she’s on a mission to score an interview with Nana. Turning to the adult Ivan (Cillian Murphy), they drive across the Arctic Circle in search of Nana. Beautifully lensed (all be it with too much lens flare, even for J.J. Abrams) by Nicolas Bolduc, Aloft is a spiritually complex and rich mess. Focusing on spirituality rather than politics in every sense of the word, Llosa takes on material that in different hands would have been engaging for an entirely different reason.

The non-linear structure is reminiscent of the best films of mid-career Atom Egoyan (Exotica, The Sweet Hearafter, Felicia’s Journey) while the ideas present would perhaps be fodder for more experimental/personal filmmaking. I had been reminded of Ellen Bruno’s documentary work, including Sky Burial and Leper. Aloft plays with ethnography but never quite achieves it, opting occasionally for style over substance right down to a pivotal sequence mid-film that explains a key aspect of Nana and Ivan’s relationship. While we’ve seen the kind of sequence in other pictures, here it is aesthetically more impactful and well-organized, but narratively questionable.

Restrained to the point of confusing in passages, one has to wonder if there truly is not very much going on outside of the frame. While excellent pictures leave us breathing room to explore the edges of the frame, inviting us in, Aloft keeps us at a distance — a problem for a film about spirituality that gives little critique or insight into the mythical healing process it is about. The film is a somewhat frustrating experience in ways it not ought to be. While I admire its ambition in visuals, performances and landscapes, its storytelling is too shaky to give it a pass.

Aloft is now screening at the Sundance Film Festival and will be released this spring by Sony Pictures Classics.