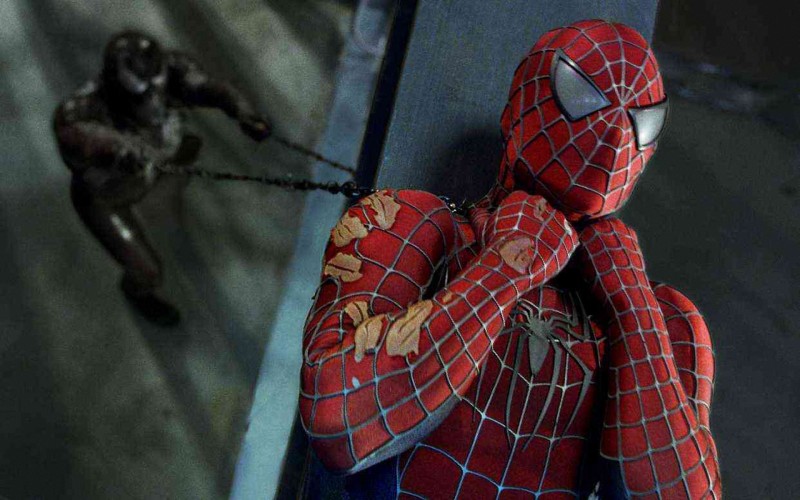 Sam Raimi’s Spider-Man 3 seems to almost invite the incredulity it’s still met with. The emotions are bigger, the comedy broader, the plot more overstuffed. Structurally, against the preceding, comparatively tight films, it courts outright incoherence, with three villains and multiple digressions, weaving together a story addled by studio interference. Yet it, much like Raimi’s other Spider-Man films, bears rather unique qualities within its genre (especially compared to the Marvel pictures that have followed since): it centers on relationships and earned emotion, Raimi deftly dovetailing action and drama. This, whether by original intent or not, takes the trilogy farthest in almost all regards, exploring darker ideas and employing an undervalued system of rhymes and motifs, playing characters and movements of plot off each other for maximum thematic payoff. While Spider-Man 3 is indeed the messiest of this trilogy, it also stands as the most ambitious and, ultimately, the most moving.

The first entry, an origin story, established the franchise-centric notion of responsibility and the accompanying weight of real loss and pain, and its celebrated sequel evolved the notion, as hero Peter Parker (Tobey Maguire) struggles with doubt and perilously attempts to balance his life between superhero and average man. Spider-Man 3 starts us, then, in an unfamiliar place: Peter is confidently atop his game, seamlessly existing as Spider-Man while comfortable in his relationship with Mary Jane (Kirsten Dunst). This is an odd place for a superhero trilogy predicated on struggle to begin, but is essential to where the film goes. While the prior titles concerned themselves with a person discovering himself and learning how to exist in this world, Spider-Man 3 feels more occupied with the dangers that come after we’ve already begun settling into our own personalities. Having largely formed his place in society, the evils within Peter more readily come to the fore. The risks are greater, the losses more real.

Indeed, Peter and his accompanying gallery of villains — Harry Osborne/New Goblin (James Franco), Flint Marko/Sandman (Thomas Haden Church), and Eddie Brock/Venom (Topher Grace) — echo each other in their displays of personal corruption, outsized by their superhuman traits. The trilogy’s villains have always treaded a line between humanity and corruption, but this thematic thread is developed most fully here. Harry (Peter’s former best friend) seeks revenge for his father’s death, for which he believes Peter is responsible; Marko, an escaped convict, accidentally killed a man while committing a robbery, and is desperate to pay his daughter’s medical bills; Brock, his career and perceived love life destroyed after Peter publicly reveals he’s a professional fraud, bonds with an extraterrestrial symbiote, becoming a creature of jealousy and hate. These processes have already been set in motion by Peter himself, having earlier in the film bonded with the aforementioned symbiote, giving into his rage against the other three. They are bound in a network of dark emotion.

The interplay between the four, while occasionally chaotic, frequently astounds with its resonance. Harry and Peter essentially role-swap in their quests for mutual revenge against each other, their hate radiating outward and harming Mary Jane in the process. Peter, having brutally (and temporarily) dispatched Marko, sets this flawed-yet-humane man on his own quest for revenge, pushing him into alliance with Brock. Every “superheroic” action here has a consequence for both plot and emotion. Our notion of heroes and villains becomes complicated, and we come to see their relationship less as one of dualistic opposition, more as an ambiguous continuum where any one of them might fall, given their respective choices. This notion of choice, as voiced by characters multiple times, is central to Spider-Man 3, and, to his credit, Raimi doesn’t allow any character to get off easy.

For a film so occupied with heavy moods and emotions, it is also remarkably lush in detail and ambition; Raimi gets more playful here, the opening minutes alone going through a greater variety of visuals and technique than the series prior. It has an almost opulent quality, perhaps in keeping with a messy production history. While the preceding Spider-Man 2 found time for its own digressions and comic interludes, this film almost wildly veers between tones and dissonant set pieces – witness, for example, the infamous, broadly comic “dark” Peter segment, finding him strutting in a wince-inducing attempted cool.

More fascinating, even, is the film’s reflection of this opulence in its visual design. The CGI work here goes beyond the trilogy’s already impressive grace into a realm of pure expressivity. Marko’s transformation into Sandman, split into two stunning sequences, finds him dissolved on a molecular level, his cells transformed into an array of golden crystals before his body is swept away, capped by the haunting sight of his screaming face eroded by the wind. His return to form is a showstopper: a pile of sand slowly starts shifting and slithering before taking a human shape. His hand reaches out to grab the locket holding a picture of his daughter, pain registering on his nearly featureless face. Motivated by love, he struggles to his feet and resumes human shape. CGI here isn’t a matter of attempted photorealism, the tool instead allowed to breathe as its own moving visualization of an emotional state and ensuing dramatic force. Another striking sequence finds Peter struggling to remove the symbiote from himself, tearing at his own suit in a Gothic bell tower as the alien creature screeches and erupts at each toll. As in the Sandman sequences, CGI here is more a matter of emotion, not representation.

In the ten years since this controversial blockbuster, it is its conclusive sobriety that gives its most powerful impression. For all the lunacy of its comedy and plot machinations, what lingers is the loss, the pain felt. As mentioned, nobody gets off easy here, with Peter and Mary Jane once again finding themselves at a funeral. The finality stands in stark contrast to the backpedaling endemic to most superhero films since. Mistakes linger and friends die. Its bleakness is all the more remarkable in contrast with the film’s final note: Peter and Mary Jane sharing a slow dance. Rather than opting for the false out of a conventional happy ending, or cynically doubling down on the film’s darkness, Raimi leaves us with a gesture of persisting love, tempered with pain. His trilogy closes on embrace.