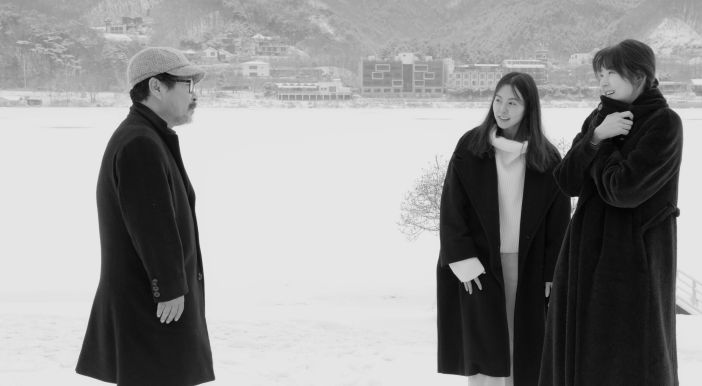 Ruminate on Life and Death in U.S. Trailer for Hong Sangsoo’s ‘Hotel by the River’

Hong Sangsoo, the prolific, celebrated director of On the Beach at Night Alone, Right Now, Wrong Them, and many more, slacked a bit and only premiered two new films last year. The most recent, Hotel by the River, conveys the interactions between a poet, his sons, and two female guests, one of whom played is played by Kim Minhee. These interactions convey the defining theme of Hong’s films: the rumination of life and its enigmatic nature. Ahead of a release in February, Cinema Guild has now delivered the U.S. trailer and poster.

Leonardo Goi said in his review, “Hong’s acolytes have reasons to rejoice in the Korean’s latest feature: beautifully shot in crisp black and white by Kim Hyung-koo – reminiscent of his work in Hong’s The Day After (2017) and Grass (2018) – and packed with a few of the director’s recurrent casting choices (including muse Kim Min-hee and Kwon Hae-hyo) Hotel by the River is imbued with the self-irony that permeates much of Hong’s ever-growing filmography, only this time the mockery is mixed with a tragic aftertaste that adds to the drama an unsettling and refreshing aura.”

Hotel by the River opens at NYC’s Film Society of Lincoln Center on February 15 and will expand in the weeks to follow.