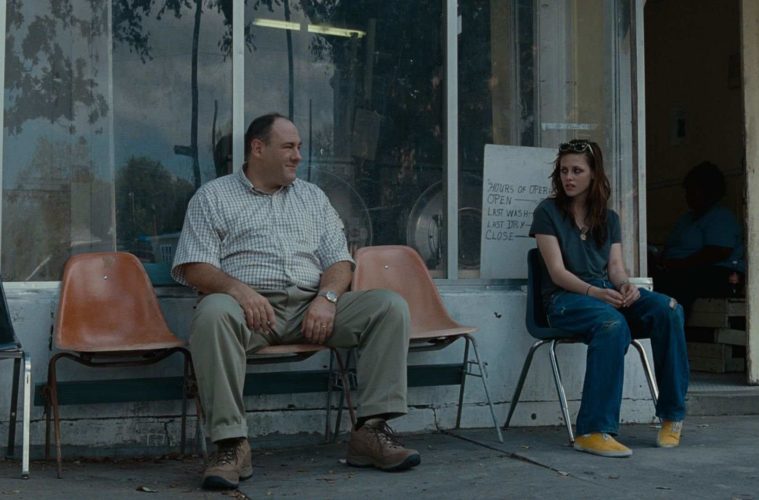 [Review] Welcome to the Rileys Doug (James Gandolfini) and Lois Riley’s (Melissa Leo) marriage is falling apart. After the death of their teenage daughter, their marriage has grown colder and colder. Both are isolated in their own saddened worlds. Doug is having an affair, while Lois lives a trapped life never leaving their Atlanta home. After the death of Doug’s mistress, who’s the only bright spot of his already isolated life, he gets the opportunity to go on a business trip to New Orleans. This setting being a perfect representation of the three central characters – where he’ll get to make another world for himself when he meets the teenage stripper (and prostitute) Mallory (Kristen Stewart).

The relationship that’s formed between Doug and Mallory could have been creepy or a sign of major delusions from Doug, but it’s handled with a surprising amount of warmth and understanding. It’s obvious that he sees his lost daughter in Mallory and it’s not played as if he’s trying to replace her, but rather getting a taste of something he once had and cherished: being a father. Mallory represents the perfect (and subconscious) scapegoat for Doug. With his mistress now gone, which also wasn’t done in a sleazy fashion, he ended up being pulled back to Lois. With Mallory, he once again tries to leave the reality that includes Lois and his dead daughter.

Not too long after a steady relationship between Doug and Mallory is made, Lois shows up. Lois comes out of an urge to rekindle their relationship and to indulge in a spontaneous act to feel alive again. Once there, the affection Doug and Lois once had for each other reappears. Mallory both makes them feel like parents again. While the bond that Lois forms with Mallory does feel a bit rushed at first, it’s understandable why she would grow so fond. It’s not as well developed as Doug and Mallory’s relationship but overall, it’s still believable.

Gandolfini and Leo are perfect when it comes to Doug and Mallory. Gandolfini brings back that sweetness and vulnerability he showcased in Where the Wild Things Are, making Doug into one of the most empathetic characters of the year. It’s heartbreaking when you see Doug in a moment of sadness. The same goes for Leo, who carries a somber tone with her throughout most of the film. They’re both tragic figures that have a similarly tragic girl bring a sense of hope to their lives. Mallory is similar to Doug and Mallory, but her emotions are more furious and uncontrollable. Stewart holds her own with Gandolfini and Leo once again proving when she’s outside of the Twilight universe, she’s capable of so much more.

Despite its bleaker moments, Scott has made a film about hope and the ending is only further proof. The wrap-up may feel a bit like a perfectly tied bow, but Scott makes sure to remind us that even though their lives will most likely go on happily, there will still be moments of pain. Welcome to the Rileys is a film about the tragedies and joys of life.