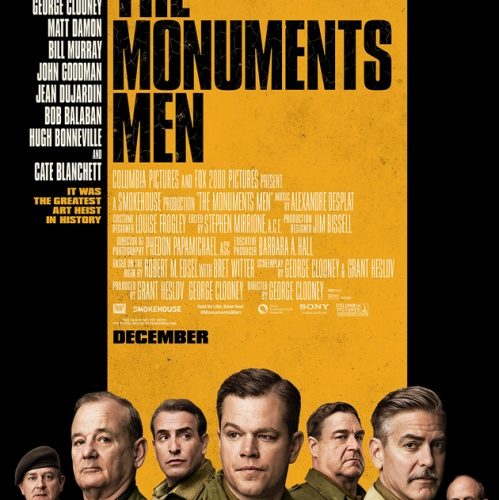 It looks like everything is here, so what’s missing?

George Clooney’s The Monuments Men is that most frustrating type of movie; it assembles a great cast, a talented director, a tantalizing slice of history, and despite the best of intentions, can’t manage to get out of the gate. It’s by no means a bad movie, but when your DNA suggests the makings of greatness, merely OK is hard comfort.

As a director, Clooney has had an interesting career thus far, veering from quirky, experimental fare like Confessions of A Dangerous Mind, the screwball Old Hollywood homage of Leatherheads, to scintillating, complex political portraits like Good Night and Good Luck and The Ides of March. Here, working with a script he and Grant Heslov adapted from Robert M. Edsel’s book, Clooney tries again for a classically mounted throw-back entertainment. The Monuments Men absolutely has a story worth telling, recounting the exploits of a mixed team of soldiers, historians and art conservationists tasked with rescuing treasured European art works stolen by the Nazis during World War II. With Clooney leading the way as  Frank Stoakes (based on Harvard art expert George Stout) the film boasts a delightful cast bringing these men and their services to light, although the finished product seems to float in a limbo between the textured nuance of Good Luck and the tonally erratic imitation of Leatherheads.

With oversight from Eisenhower, the Monuments Men were successful in reclaiming thousands of hidden artworks from German concealment. The specifics of how spy-craft was used to locate these works, which were in many cases stowed away in salt mines awaiting Hitler’s hypothetical museum, isn’t really covered in the film, and the drama is the poorer for it. Instead, we spend much of a very typical Hollywood war picture traipsing across the countryside with Clooney and his six compatriots. Among them are a Metropolitan Museum curator (Matt Damon), a sculptor (John Goodman), the historian (Bob Balaban) and the architect (Bill Murray), an art scholar (Hugh Bonneville) and a French art dealer and their Jewish translator (Dimitri Leonidas). These men proceed across the landscape of the war–from  the beaches of Normandy and down eventually into those German mines–and act heroically as they go, giving their lives to preserve the culture as well as the people. That idea of saving pieces of art at a time when the war and the Holocaust were still ongoing provides the underlying root of The Monuments Men, and remains the film’s most intriguing prospect. Clooney constructs the adventure so the dichotomy between this tremendous effort and the human suffering occurring around it is deeply felt. When the Men make efforts to return one of the paintings, what they find is an empty house, and the gold surrounding the stolen treasures turns out to be fillings pulled from human teeth. The score by Alexander Desplat, all triumphant, nostalgic marches and soaring grandeur walks hand-in-hand with Phedon Papamichael’s gorgeous, burnished cinematography to render a visual aesthetic that feels classy and respectable.

That respect and class are very apparent in The Monuments Men, but that’s about all there is in the way of identifiable emotion. In order to stick the landing, Clooney needed to create a film of passion and artistic fervor to reinforce and substantiate the great importance of  what these men themselves did. Good Night and Good Luck was a film of ideas that stood up for free-thinking , making its points with a hand as deft as the one it was documenting, and that’s essentially what’s lacking here. This is a mildly amusing, tonally erratic story of a group of individuals that felt art and culture deserved to endure and was worthy of sacrifice. This plays more like a very well-produced History Channel production aimed at high school classrooms. Throw in a love interest (Cate Blanchett) and some humor and plenty of actors the kids recognize, and then stir briskly and serve before everyone forgets. It’s difficult though, to really indict The Monuments Men for its flaws.It has its heart in the right place and Clooney does a technically proficient job, but there’s no denying that it is a significant disappointment. In his effort to engage with the glory days of the genre, the director/actor fell into the trap of merely mimicking the poise and style of the older pictures. Instead of letting them get lost in the backdrop, Clooney needed to draw out his characters more and trust his actors to carry the day. In doing that, he would have added the missing ingredient necessary to make The Monuments Men a treasure worthy of remembering.