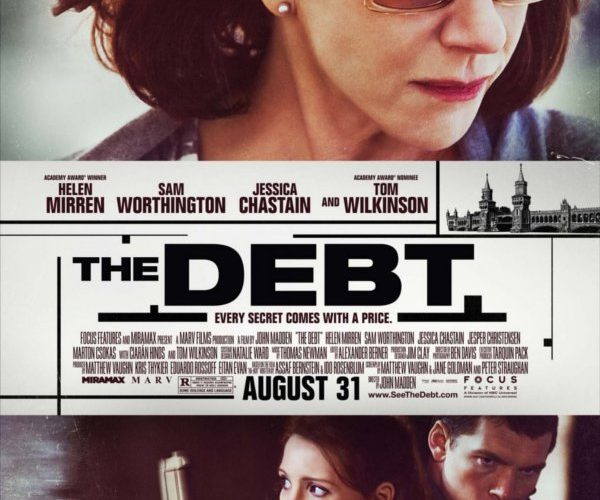 There is a fantastic film in The Debt. With a director like John Madden behind the camera, it’s a bit surprising that he didn’t churn out something of a higher caliber, especially when there’s plenty of scenes that show signs of a competent, meticulous storyteller at work. And, sure enough, when those scenes play out – a tense train station sequence in particular – they outweigh the film’s less impressive qualities.

The Debt tells the story of three Mossad agents – Rachel Singer (Jessica Chastain), David Peretz (Sam Worthington) and Stephan Gold (Marton Csokas) – hunting down a Nazi war criminal in 1965. It’s a promising hook, and the script (initially scribed by Matthew Vaughn and Jane Goldman, then worked on by Madden and Peter Straughan) delivers on that promise, but only in 1965. Everything involving that mission is tightly paced, suitably claustrophobic and keenly aware of the gray area of each character’s motivations.

It’s when we meet these same characters 30 years later that problems arise.

One would think seeing Helen Mirren, Tom Wilikinson and Ciarán Hinds as the older, regretful characters who were once young and ambitious would be nothing but captivating. These are three pros that could make waiting in line at the DMV exciting. The main issue is that their predicament lacks the power and excitement of seeing the trio in their younger years. When it comes to the 1965 East Berlin storyline, Madden crafts a real, psychological thriller. Rachel, David and Stephan have never worked together before, and they are setting out to get the job done quick and clean. As is always the case, that’s not how it goes down. An expected love triangle develops, and escaping with the war criminal, Dieter Vogel (Jesper Christensen), turns out to be not so simple. Stuck with in hiding with their target, tension runs high.

Vogel represents a perfect counterpoint to Rachel, David and Stephan. He has committed horrific acts, but unlike his captures, expresses no regret, or is effectively hiding it to get under their skin. He’s a  lesser antagonist that pushes their buttons in subtle ways. I use “lesser antagonist” because, by the end of the film, the questionable choice Rachel, David and Stephan make in their younger years is the greatest villain of the film, and it eats away at their lives.

It’s subtle storytelling that loses its shape thanks to a flat and generic ending. The performances by Chastain, Csokas and a good accent-slipping Worthington hold attention, but it’s the thematic and internal work back in the past that make this uneven thriller better than the ending would lead one to believe.

The Debt is in wide release starting today, August 31st.