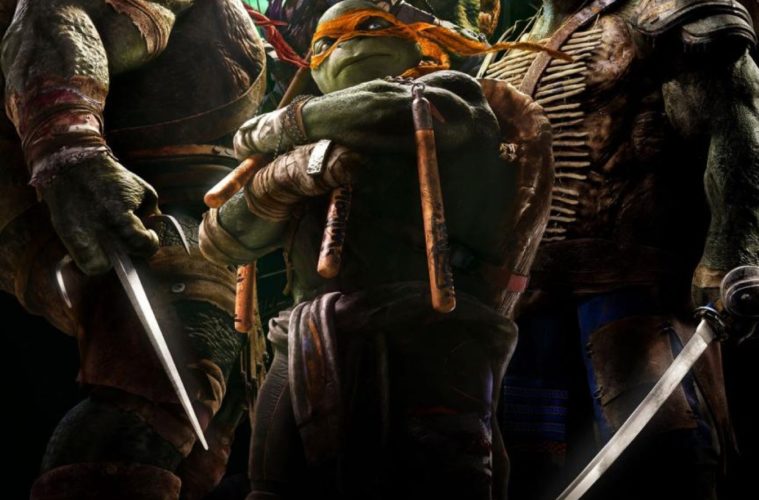 The failure of the new Teenage Mutant Ninja Turtles is not a result of irreverence towards the original source material, but rather a lack of curiosity and imagination concerning that promising title it’s cashing in for name recognition.

When Kevin Eastman and Peter Laird first debuted their pizza-eating, crime-fighting heroes, that wacky moniker was designed to capture late-night b-movie zaniness and comic-book earnestness. Initially assumed to belong to the schlocky ranks of spoof material like Attack of the Killer Tomatoes or The Toxic Avenger, TMNT soon distinguished itself by being every bit as out-there as the premise demanded. The first televised cartoon miniseries, derived from Eastman and Laird’s comic work, featured more than just four anthropomorphic turtles and their blade-covered nemesis Shredder; it also contained robotic, carnivorous rodents, human house-flies, and a sentient brain from the Planet X, who lumbered around in a massive cyborg body. The new film, by contrast, loiters in a world that wants to be gritty, real, and ultimately dull. Lacking in essential creativity, the new TMNT barely regards the fact its primary characters are teenage, mutant, ninja and turtles.

To be completely fair, all of the previous live-action Turtles films have downgraded the fantastical elements that defined the original concept, relying instead upon a mostly drab real-world setting. As clunky as the first three were (the sequels are not much worth mentioning), the series retained a cock-eyed charm thanks to the odd suit designs by the Jim Henson Factory, inspired casting like Elias Koteas as crazed vigilante Casey Jones, and an off-kilter merger of the mundane and surreal. The dreaded Foot Clan trafficked in stolen Rolex’s and snatched walkmans but rat-mentor Splinter still learned kung-fu from his cage, mimicking his master’s movements in cheerfully cheesy stop-motion. The 2007 animated film returned the stylized nature of the cartoons while expounding the more defined brotherly angst the earlier movies had managed to pipe in. All of them retained an awareness of the inherent absurdity of the idea and found the fun in it, which is where Jonathan Liebesman’s revamp falls painfully short. Despite early reports that the Turtles would now be aliens from another planet—inciting incoherent nerd ranting—the new film turns out to be largely faithful to the characters and their defining attributes. Reporter April O’Neil (Megan Fox) investigates the crime spree of the infamous Foot Clan and along the way runs into four hulking, mutant vigilantes that live in the sewer with their surrogate father, Master Splinter (voiced by Tony Shaloub).The turtles are still siblings mutated by a version of the transformative ooze from the earlier incarnation, and Splinter, that wise old sewer rat, still has a connection to Shredder (Tohoru Masamune), the maniacal leader of the Footclan. William Fichtner and Will Arnett also join the cast, but like Fox, prove that the humans are blandest species in the movie.

The script also adds a few background elements intended to provide an extra layer of relationship between April, the turtles and the Shredder. These changes add nothing to the film’s structure or impact and ultimately stink of audience pandering no one asked for. The real change comes in terms of tone and atmosphere. This is a more serious, grandiose and intentionally edgy Turtles, that wants to provide a world that might plausibly hide giant humanoid turtles in the city’s sewers and become overrun by super-powered samurai. At a base level, the individual turtles still behave in ways we expect; Donatello (Jeremy Howard) Knoxville) is the geeky tinkerer, Michelangelo (Noel Fisher) the hip, quipping party dude, Rafael (Alan Ritchson) the hot-headed brat, and Leonardo(performed by Pete Ploszek and voiced by Johnny Knoxville) the defacto leader trying to keep his brothers united. Too much time is spent with Fox’s April trying to discover the origin of the turtles and not enough on the sibling antics. After nearly an hour of tedious set-up explaining what we already know about the turtles, the film careens towards typical action set-pieces that feature copious special effects but very little value or excitement. One of the most disheartening things about the new Turtles is that it’s a decidedly ugly and joyless exercise. Much effort, skill money and time have been expended to give the turtles an air of plausible existence, culminating in computer-generated creatures that live in the frame with the same realism as Rocket the Raccoon or Caesar the chimpanzee. In the cartoons and movies, the turtles were largely distinguished by different colored masks and weapon variety. Here, they each display separate features, nuances and quirks that set them apart from each other. At a design level, the pleasing, stylized curves of the originals are replaced by a grotesque amalgamation of humanoid and reptilian characteristics.

This approach—which trickles down to Splinter (who looks old, tired and too mangy) and Shredder (like Megatron mated with a pin-cushion)—is interesting but misplaced; giant turtle teens will never be wholly plausible, and making them physiologically believable only renders them creepy and dissatisfying. Liebesman gave us unconvincing and indistinguishable action in Wrath of the Titans and Battle: Los Angeles, and here he fails completely at making the fight scenes pop as memorable struggles. Whether it’s a rushing blur of light, effects and sound or a manic snow-bound chase scene that forgets its own geography, the action in TMNT barely registers as anything other than slickly produced static. Parents have no in-road to the predictable and tedious drama and children curious about the turtles will likely be turned off by the fact these iterations lack all charm and warmth.

I’ve always enjoyed the Teenage Mutant Ninja Turtles as a concept and idea, and I have a fondness for the animated min-series and the original feature film. However, I didn’t walk into the new movie expecting it follow the standards they set. What I do expect is an embracing of the silly and ludicrous ideas at its heart and a playful enjoyment of the characters. There’s a shortage of great schlock in this world; what a pity that such a tremendous title has been wasted on such vapid execution.