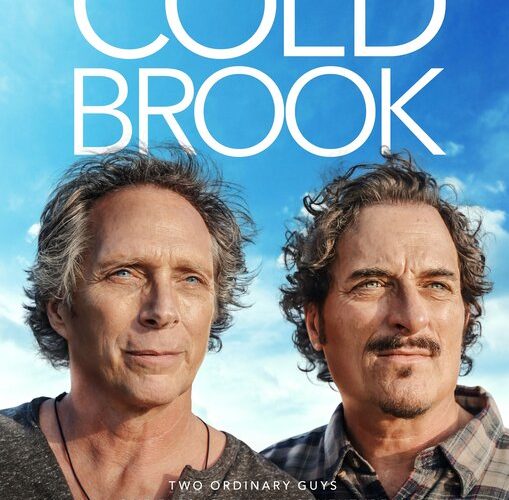 I did a lengthy retrospective interview with William Fichtner back in 2015 as part of a local Buffalo, New York publication’s “film issue” due to his being raised in the suburb of Cheektowaga and forever holding a special place in his heart for the city wherever he goes. When talking about the area’s rejuvenation and increased appeal for the film industry, he relayed his dream of one day soon shooting a script he finished co-writing with Cain DeVore in his hometown’s backyard of Upstate New York. His vision for this film was to have the “crystal clear Finger Lakes in the background” rather than the muddy rivers of a Louisiana tax break. He hoped to champion his roots on-screen and deliver its underrated, natural beauty to the world.

The financing came together for that dream to become a reality two years later as Cold Brook‘s Onondaga County-set tale of two best friends (Fichtner’s Ted and Kim Coates’ Hilde) unwittingly caught-up in an unbelievable mystery began rolling. He doesn’t waste any time showcasing the region’s woodland hills in the opening sequence before later highlighting the majestic vistas that frame the sunset after a day of paintball, drinking, and laughter. It’s a nice reprieve from the daily grind of raising kids and working 9-to-5 even if Ted and Hilde do so together as maintenance men on the university’s campus. And being that they’re also neighbors, their wives (Robin Weigert’s Mary Ann and Mary Lynn Rajskub’s Rachel) have accepted the fact they might love each other more than them. You could say that what happens is in some respects the product of a subtle mid-life crisis wherein these men have fallen prey to life’s routine, forgetting what spontaneity even means. That’s not to say they aren’t comfortable falling in line with these patterns, they’ve simply begun to recognize how much things have changed. This is true for Ted most—if for no other reason than he’s the de facto lead. Hilde still goofs around with Rachel and their girls while Ted feels a palpable distance growing between Mary Ann and their son. These things happen in a marriage when survival hinges upon certain things being done at certain times. You start taking each other for granted and let responsibility replace emotion. And then the distance continues expanding.

Well there’s no better way to inject a jolt of electricity into your life than through a heroic act caught on-camera. After the campus art museum’s overzealous security guard Chip Ostrowski (Brad William Henke) clears out the halls to lock-up, Ted and Hilde bring out a ladder to change a couple bulbs only to discover someone (Harold Perrineau) was still inside. Despite escorting him to the exit, he somehow appears right back in front of the same exhibit he hovered above previously. Unsure how he could have returned, they chase him through the basement to a dead-end before bursting through an exterior door and scaring a bunch of students. They tell the kids to go back to their dorms and be careful after ostensibly chasing away a criminal. Ted and Hilde garner increased exposure with strangers and the media while Chip’s conjures resentment that it wasn’t him: the man with the badge. It’s a nice kick in the pants for the former that’s as much a “job well done” as a surprisingly self-reflexive admission of their waning purpose. Even more unexpected, however, is the intruder’s return with supernatural peculiarities yet revealed. Does he come and go by unexplainable means because he’s a ghost? Is he wandering these halls because he’s lost something or someone and can’t find peace until it’s recovered? And why has he appeared to Ted and Hilde? Why has he chosen them as his guides to solve what even he can’t quite articulate? How far will they go to help him attain closure?

What follows is an endearing adventure wherein Ted and Hilde seek to escort this man home while simultaneously rediscovering their own. Just as Perrineau’s character searches for his wife with unwavering dedication, these two are seemingly avoiding theirs. They leave earlier for work, stay later, and ultimately head towards Ted’s country property on Cold Brook Road for a couple beers to unwind and parse whatever fresh detail has taken hold. While they’re obviously scared and confused considering they haven’t a clue why this is happening and know they can’t tell anyone without them thinking they’ve gone crazy, they’ve also been given something to be excited about for the first time in years. They share a secret that’s forcing them to take uncharacteristic risks and they’ve embraced it fully. Some of their actions are convoluted to keep a sense of danger active (Chip is always lurking as they enter the museum off-hours), but the addition of eccentric supporting players like Henke’s over-the-top authoritarian and Louis Mustillo’s county clerk alleviate our desire to scream about narrative convenience via their infusion of welcome humor. Think of Ted and Hilde as two children who’ve lucked into escaping their responsibilities with an unparalleled glee that inevitably frustrates their wives because its born from something they’ve been shutout from enjoying by their side. The truth of the matter is that these men are neglecting their families and perhaps have been for a while. Seeing Perrineau’s visible distress being away from his love therefore reminds them what they’re currently working towards losing themselves.

I wish this comparison had been stronger since Mary Ann and Rachel never quite relinquish their status as pawns to the script, but that’s what happens when they’re intrinsically written as default albatrosses around Ted and Hilde’s necks. An adversarial dynamic manifests upon showing how these men are happier away from home and it’s only ever superficially alleviated. Fichtner and DeVore are focused on the high concept mystery instead, hoping its heartfelt camaraderie and resonant rapport (Fichtner and Coates are wonderful) will compensate for the shallow approach to those troubles at home. My enjoyment of the magical ride and its underlying themes prove that it does. Cold Brook is an adult fairy tale that embraces its broad interpretations to remind its leading men about what truly matters most.