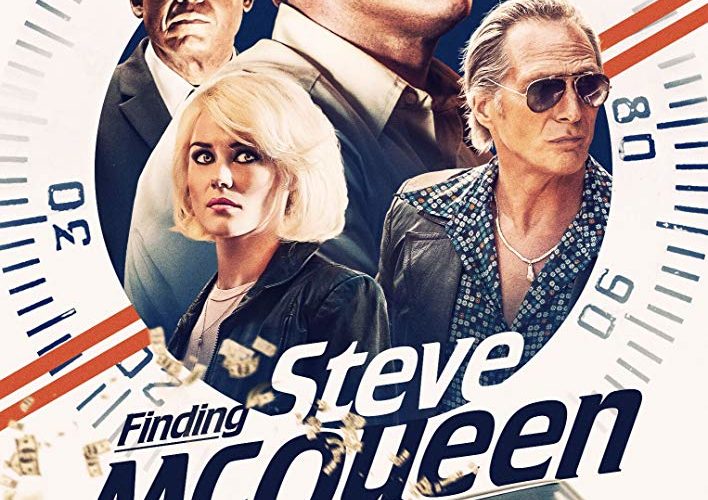 The Dinsio Brothers and their accomplices stole around nine million dollars from four hundred-plus safety deposit boxes inside the United California Bank of Laguna Niguel. To read Amil Dinsio’s website is to learn of his self-proclaimed “master” exploits and how the FBI sought to frame him for the job before discovering the evidence necessary to prove he did it. Maybe there’s a movie there, but probably not. The world simply doesn’t need another self-serious drama projecting the smarts it takes to pull off the “perfect” heist despite still inevitably getting caught. So screenwriters Ken Hixon and Keith Sharon looked beyond the Dinsios to uncover their nephew Harry Barber as a more entertaining entry point. This burglary could acquire the necessary humor to render it appealing through him instead.

As a result, Mark Steven Johnson’s Finding Steve McQueen is less about the crime than how Harry (Travis Fimmel) inexplicably remained a fugitive almost eight years later despite the others being arrested shortly after leaving California for their Ohio home. If you know Fimmel as an actor, you know the reason isn’t because the character he’s playing is slick enough to evade a nationwide manhunt. No, this McQueen super-fan merely enjoyed an insane streak of luck that let him lead an otherwise quiet life with a new girlfriend (Rachael Taylor’s Molly) in her sleepy middle-American town. It’s only when he sees a photo of himself on the post office wall that he realizes his luck has run out. The time has come to let Molly know the truth. So we begin in a diner with Harry spilling the beans to Molly over a table of every dessert listed on the menu. There’s a wealth of embarrassment on his face that can’t help but get mixed with a child-like innocence once the outrageous details of the crime are shared. Our first glimpse at the past sees him dressed like Steve McQueen in a stolen car, joyriding at illegal speeds in order to feel the rush his idol’s iconic characters did onscreen. He’s a doof in the best, most harmless sort of way. If he finds himself getting into trouble with Uncle Enzo Rotella’s business (William Fichtner as a stand-in for Amil Dinsio), it’s the product of his curiosity and desire for adventure. Life unfortunately isn’t the movies.

Enzo is the latest in a long line of eccentrics for Fichtner to sink his teeth into. He’s supposed to be the brains of the operation with Pauly Callahan (Louis Lombardi as the James Dinsio figure) providing explosives and yet it’s the latter that’s constantly trying to cool the former off. Enzo’s present ire concerns Richard Nixon with so much hatred that he’d travel cross-country in the hopes a story about dirty campaign money housed in a Laguna Niguel bank is true. These two and Ray Darrow (Rhys Coiro in the position of lookout like Amil’s brother-in-law Charles Mulligan) would do anything for a potential thirty million bucks. Add Harry and his troubled Vietnam veteran of a brother (Jake Weary’s Tommy) and it’ll be a piece of cake.

The film shifts back and forth through time as Harry explains why the FBI is looking for him. Sometimes it’s a tale of hotheaded Ohioans being so blockheaded on the job that they stumble into good fortune and other times its memories of he and Molly falling in love. The constant through everything is Harry’s big heart. This is a guy who sees the bank robbery as a lark rather than the start of what could become the scene of a homicide if Enzo and Ray don’t keep their paranoia in check. He’s someone those around him knows to be a screw-up whose fantasies of McQueen-style living keeps him detached from the real world and yet it’s his rambling thought process that solves most of the team’s problems. Alongside his parallel trajectories is that of Agents Howard Lambert (Forest Whitaker) and Sharon Price (Lily Rabe). They’re the two assigned the case, so their thread occurs between the two Harrys (after the heist, but before he meets Molly). What should be a straightforward assignment, however, becomes something else when Associate Director W. Mark Felt (John Finn) arrives from DC to vaguely explain that the president had an interest in what happened. Does this mean Enzo’s information was correct? Will the heist end up netting the quintet thirty million? Or was the value of that vault not measured in dollars and cents? With how impulsive and one-track these guys prove, they could probably have found the Watergate tapes and thrown them away as trash without a second thought.

They aren’t stupid as much as ignorant, though. You can’t be the former and accomplish what they did, but being the latter is definitely an avenue towards getting caught for the dumbest reason possible. Our fun lies in watching them bicker only to have the flightiest of them all provide the seemingly impossible solutions. It’s a process that endears us to Harry from the beginning as an impressionable soul who wanted to feel included so badly that he couldn’t tell when he was being used. Finding Molly is therefore the defining moment of hope in his life despite occurring just after his defining moment of impending destruction concluded. He’ll ultimately reveal his regrets, but never waver on the self-aware reality that his mistakes led to happiness. Fimmel is perfect in the role because he toes that line between simple and charming with a deftness the project might not deserve. Johnson isn’t afraid of breaking the fourth wall so Harry can mug for the camera and make this film into the exaggerated anecdote it is either. Fichtner chews the scenery, Coiro embraces the same wildcard menace he possessed in Entourage, and Lombardi unfortunately becomes the odd man out saddled with lazy “out-of-touch grandpa” jokes laden with overt homophobia. Taylor is mostly relegated to sounding board stand-in for the audience, but she gets a couple of scenes to shine via flashback nonetheless. And Whitaker wraps this menagerie in a bow as a perpetually smiling, genial law enforcement agent who likes the movies almost as much as Harry.

It’s paper-thin as a result since there’s really no one to truly despise. Enzo, Pauly, and Ray are as close as things get, but it’s not like they’re risking our protagonist’s life. With such low stakes — Harry’s here to tell the tale after all — Johnson really has no other option besides making it a light and airy bit of escapist entertainment that immortalizes the bumbling lackey rather than the amoral criminals. The Steve McQueen stuff is laid on pretty thick considering how little it adds to the whole besides likable color, but I guess it doesn’t really matter since “likable color” seems to be the movie’s entire identity. You probably won’t love Finding Steve McQueen, but that unyielding wholesomeness ensures you won’t be able to hate it either.