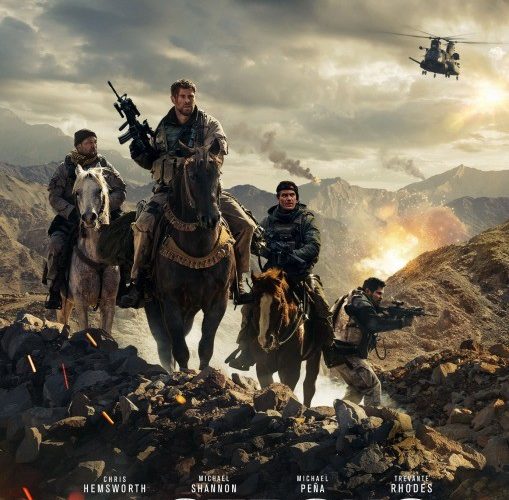 War films generally come in two varieties: a gray introspective look at its emotional and psychological cost and black and white jingoistic propaganda. The former is generally acclaimed as award worthy while the latter is dumped during winter months so its target audience of NRA-loving Republicans in American flag tees has something to watch during a drama-heavy, liberally slanted awards season. (I jest.) This doesn’t, however, inherently mean one route is “better” despite valid arguments to the contrary. And for those who vehemently disagree, it doesn’t mean the propagandized route is without any value. Films of this ilk are easy to be disregarded as two-dimensional, but a refusal to understand their value regardless is just plain lazy. Because while you may not “learn” anything, others find themselves healed.

It’s okay to remain on the surface when that’s where the topic exists. There are certain events met with a universal response that moves beyond thought into immediate action (and sadly there are even more that should but don’t, i.e. mass domestic shootings). One such moment is September 11th, 2001 and the terrorist attack on the World Trade Center towers. Complain all you want about where the war that erupted went after a botched WME storyline, but George W. Bush was re-elected in 2004 with almost ten million more votes than the previous highest vote getter (Ronald Regan). America was still reeling and in pain. We still wanted those responsible to be found. Revenge was our motivation — plain and simple. You don’t therefore need more to depict it. Nicolai Fuglsig’s 12 Strong (adapted from Doug Stanton’s 2009 book Horse Soldiers by Ted Tally and Peter Craig) being a “Hoo-rah” rallying cry of heroism pitting the American way as superior and “protected by God” doesn’t mean it fails. On the contrary, this result actually brands it a success. The question then becomes whether or not it is “good” within that accomplishment. How is the action? How is the acting? The drama? The suspense? Just because the film’s superficial goal makes its portrayal of the enemy problematically prejudiced (Numan Acar’s obviously villainous Mullah Razzan is gratuitously shown murdering women to drive that point home and unfortunately also reinforce ignorant stereotypes that all Muslims practice Sharia Law) doesn’t mean it can’t still work as an authentic display of truth.

This movie isn’t about the intricacies of Islam or the origins of the Taliban. It’s not even about Osama Bin Laden. 12 Strong presents a military reaction to an unspeakable tragedy. It’s about the twelve men who fought to be the first boots on the ground in Afghanistan to deliver that response. These soldiers saw what happened and instantly sprung to attention to do something about it — some ripping up retirement papers and requests for desk work. So the story consists of controlled rage, unlikely miracles, and strategic victories. It’s quite literally about good versus evil and therefore can be forgiven for leaning so heavily towards that mode. There can be no wiggle room: Captain Mitch Nelson (Chris Hemsworth) and his men are heroes while Razzan is a terrorist. These are empirical facts in the context of what happened. Accepting them should therefore allow you to appreciate the intricate and unbelievable machinations of what transpires. The sheer speed at which our troops were deployed is insane and their task more so. Nelson had zero combat experience, his team had to meet what many would consider a Uzbek warlord in General Dostum (Navid Negahban) to form an allegiance, and they all had to rush into a firefight on horseback with only a fraction of the enemy’s numbers. They were ordered to free a city experts predicted would take two years in only three weeks. We don’t question why they do it because we all saw those towers fall. We simply watch how they managed to complete the impossible.

Besides one short scene back home with their wives watching Donald Rumsfeld on television, Fuglsig stays in Afghanistan after the team arrives. The mission was classified so there’s no real point going stateside expect for emotional manipulation that the story doesn’t need to succeed with 9/11 still fresh. Instead we witness Nelson growing into his position of leadership while pushing back against Dostum. We start to understand the long odds they face, the secondary war being waged (Dostum against a tenuous Northern Alliance ally), and what’s at stake if they fail. There’s humor thanks to an authentic rapport (and Michael Peña as Sam Diller), humanity in the clichéd yet honest relationship between Ben Milo (Trevante Rhodes) and his young shadow (Arshia Mandavi’s Najeeb), and immense courage by all.

Suspense holds steady with visits to Colonel Mulholland (William Fichtner) and Lt. Colonel Bowers (Rob Riggle) second-guessing Nelson’s odds and the always-surprising wrinkles being thrown Mitch’s way on the ground. Michael Shannon’s Hal Spencer may appear to be here for sage wisdom, but he ultimately takes a backseat like his compatriots (Geoff Stults, Austin Stowell, and Ben O’Toole amongst others). This is Hemsworth’s show as his Nelson steps up without one iota of doubt by making tough calls. He also has to be on his toes opposite Dostum, a character with personal reasons of his own that do cut deeper than ours could considering his people face attacks daily. Negahban is easily the best actor here and yet Hemsworth holds his own for some gravitas above A-list celebrity.

And despite any preconceptions as far as subject matter is concerned, 12 Strong is a unique modern war movie because of the logistics involved. This fight is portrayed onscreen as a hybrid of War on Terror tactics and those from centuries ago. The juxtaposition of tanks and land-to-air missiles against a cavalry of soldiers is pretty intense as a result. Does watching a bunch of locals getting shot while Hemsworth rides through unscathed get laughable? Sure. But this is a true story and people have to die for others to live. Whether you see that as divine intervention (which honestly makes you no better than an enemy doing the same) or sheer luck is on you. Fuglsig’s job was to document, commemorate, and inspire. He does all three.

12 Strong is now in wide release.