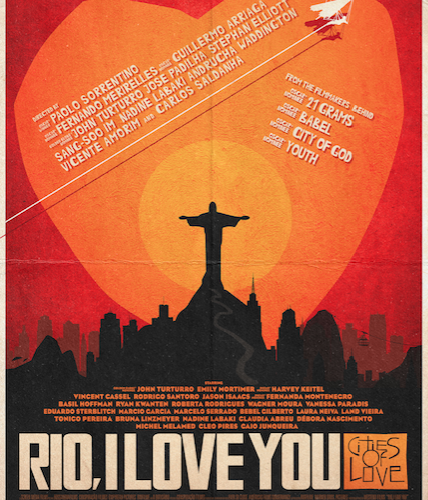 [Review] Rio, I Love You

The third and final film in the “Cities of Love” trilogy, following odes to Paris and New York City, Rio, I Love You collects ten short films about love in Rio de Janeiro, Brazil from the likes of Fernando Meirelles, José Padilha, and Paolo Sorrentino. The ensuing mess links their snippets of narrative not by the theme of love, but by cheap poetry for the coffeehouse crowd — discussing love as one might discuss the weather — and inescapably colorful vistas. With relentlessly bright environment no doubt sanctioned by Rio’s tourism board and the film’s countless sponsors, the shorts all play like exceedingly surreal commercials, like Mentos ads on crack.

The shorts are also more literally linked together by sinewy montages of attractive people in Rio, smiling lightly like they’re advertising beer and sunlight. The shorts also share the unfortunately literal soundtrack, whose lyrics spell out any wispy themes the films manage to brush by.

Its stars are almost all wasted, like John Turturro, whose dialogue is written like word salad, each following word taken from a different soap opera script. Vagueness and a whip-cracking pace combine to make a surreal experience of indecipherable conversation. With no real cohesion other than a disdainful, ineloquent view of love and the kind of smile one gets when their mouth corners are pushed up, we may as well just discuss the subjects of the shorts. That way if anything strikes one as interesting, they can seek out the component parts.

The film’s first depiction of homelessness culminates in a slapstick farce as a grandmother’s (known as Mrs. Nobody) love of the streets and homeless culture is undercut by the inclusion of a point-blank blast of lesson-learning by her grandson. Let’s just allow a grandmother to enjoy her life without having to teach a tagalong yuppie about it.

This is followed by a woman playing a rich heartless caricature that made me long for the subtlety of a name like Cruella de Vil. Her elderly husband enunciates like an anchorman while she mewls out a parodic whine. What could snowball into a Twilight Zone episode hiccups to its juvenile Tom & Jerry finale as we care little for either member of the marriage.

A Mickey Mousing parade of feet follows in their wake, juxtaposing a sand sculptor and a nearby neverending stream of musically accompanied pedestrians. The schtick falters like an idea below even the most gimmick-ridden music videos, something the likes of OK Go would scoff at. “Amateurs,” they’d say, before jettisoning their instruments into space.

It’s not a complete wash, however. A segment featuring a one-armed boxer and his disabled wife escalates to a strange and depressing deal with the devil, played by Jason Isaacs. Well-shot by Guillermo Arriaga, the boxing scenes make sense even in three to five-second clips, with moments capturing an interesting ethics of love – the boxer fighting for the body of his wife in multiple ways.

There’s also a vampire version of the bald dancing Six Flags man for seemingly no reason, a hilariously frustrated homeless kid, a politically raging hang glider, and an extraordinarily attractive ballet duo whose dueling silhouettes possess the most artistry of the film.

The parts are not greater than the whole, and the whole is not greater than the parts. It is instead as if, in the midst of an offensively bitter stew, a few chunks of interestingly seasoned chicken are soaked through by the ruinous broth. Some of these shorts are worth the ten or so minutes they take, but none of them justify wasting time on Rio, I Love You.

Rio, I Love You is now in limited release and expands on April 29.