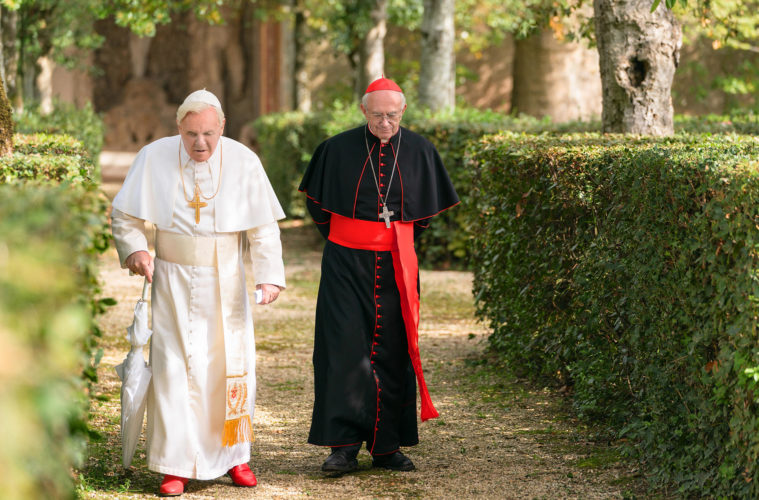 Since his break-out feature City of God, Fernando Meirelles hasn’t quite lived up to the promise of that beloved drama but he’s now back with what looks to be his most acclaimed film in some time. Scooping up audience awards at a number of festivals, The Two Popes stars Jonathan Pryce and Anthony Hopkins as… well, it’s a given. Based on a true story, the Catholic Church dramedy will arrive in theaters later this month before hitting Netflix just before Christmas.

The Guardian’s Peter Bradshaw said in their review, “Hopkins is very watchable as Benedict: severe, reactionary, with a piercing hooded-eyed gaze under his snowy white hair and the negligent, elderly hauteur that Hopkins brought recently to Shakespeare’s Lear (with Pryce as Cordelia and no other daughters to spoil the party.) The film is at its most successful when it is a duel between the two of them; it gets a bit soft and flabby when they warm up to each other and become an old-geezery Odd Couple who wind up watching the football together. I’m not sure the real-life Ratzinger was or is ready for that.”

See the first trailer and poster below.

From Fernando Meirelles, the Academy Award-nominated director of “City of God,” and three-time Academy Award-nominated screenwriter Anthony McCarten, comes an intimate story of one of the most dramatic transitions of power in the last 2,000 years. Frustrated with the direction of the church, Cardinal Bergoglio (Jonathan Pryce) requests permission to retire in 2012 from Pope Benedict (Anthony Hopkins). Instead, facing scandal and self-doubt, the introspective Pope Benedict summons his harshest critic and future successor to Rome to reveal a secret that would shake the foundations of the Catholic Church. Behind Vatican walls, a struggle commences between both tradition and progress, guilt and forgiveness, as these two very different men confront elements from their pasts in order to find common ground and forge a future for a billion followers around the world. The Two Popes arrives in theaters on November 27 and on Netflix on December 20.