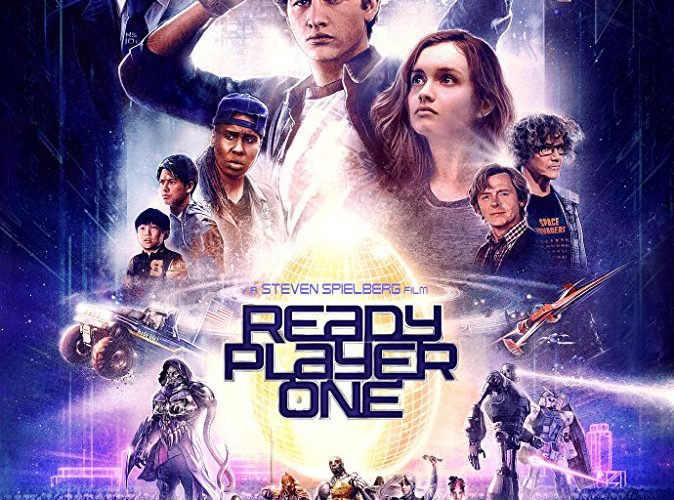 Review: ‘Ready Player One’ Has Verve But No Soul

Ready Player One is an abomination of a novel, but it was never going to be that bad as a movie. If nothing else (and frankly, there may be nothing else), Steven Spielberg is an infinitely better director than Ernest Cline is a writer. For the auteurists out there, this film’s most obvious sibling in Spielberg’s oeuvre is Tintin, as it similarly exploits the unlimited, camera-less potential of all-CGI worlds for extraordinarily elaborate sequences. Anyone can do a long take, but not everyone will do a long take that pivots into a rapid zoom in on a subject. But Tintin is a supercharged Indiana Jones adventure; Ready Player One doesn’t merely up the scale but overcrowds itself. The scenes of millions of things happening at once are skillfully made, to be sure, but they’re still visually busy to the point of numbness instead of energization. The action has verve but no soul.

This is how movies often decide to portray virtual reality, which is the stage for most of Ready Player One. It doesn’t have to be this way; the superflat-inspired digital spaces of Mamoru Hosoda’s Summer Wars are just as packed with detail but in a vivid, engrossing way. Perhaps it’s because that anime film is colorful and illustrated with deliberate movements, whereas this one is mostly in Janusz Kaminski’s vile grey scale and aflurry with the unnaturally rapid motions of CG characters. Hosoda’s vision of the internet’s alternative universe was also populated with imaginative characters, whereas this one is mainly made up of pop culture references, like an incel version of Snow Crash.

The glut of references is also the crux of the plot. In 2045, denizens of the OASIS – essentially a VR MMORPG – are searching for the “Easter Egg” hidden somewhere within by creator James Halliday (Mark Rylance, whose impression of a spectrum tech genius is howlingly awkward) shortly before his death. The winner gets half a trillion dollars and control of the OASIS. Young Wade Watts (Tye Sheridan) is one of many “gunters” – “egg hunters,” but that doesn’t make it any less funny to hear people say “gunt” over and over – but he has something no one else does: He’s the protagonist. No seriously, that’s his only special quality. He supposedly has greater insight into Halliday’s mindset than anyone else, but other people solve the riddles leading to the Egg just as often as he does. He is the embodiment of the nerdy white male lead whom a presumed nerdy white male audience is meant to project onto.

That same audience is also the target for the innumerable callouts, both large and small, to the annals of nerd-beloved films, TV shows, and video games. Back to the Future, The Shining, Akira, The Iron Giant, Halo, Child’s Play, Overwatch. Many, many more. Nothing is as insufferable as anything the book does, but that’s down more to differences in media than actual quality. A long shot full of blink-and-you’ll-miss-it cameos goes down a lot smoother than having to work through paragraph upon paragraph doing nothing but listing things (try to read the excerpt in the article I linked without physically averting your eyes in embarrassment). Cline still wrote the screenplay (along with Zak Penn), so the story remains a celebration of nostalgia that speaks insincerely to the importance of finding joy in the real world.

One could interpret that Spielberg is subverting the text the characters’ attachment to the OASIS. Their treatment of Halliday extrapolates the cult of Steve Jobs into full-on religion – children weep at news of his death, and Wade even falls to his knees upon meeting his avatar. There are cuts between digital avatars and their real-world operators looking ridiculous as they flail about. The villainous IOI corporation seeks to take over the OASIS in order to monetize it, and maintains an army of debt-obtained indentured servants, which is something Apple is likely one or two steps away from at the moment. One meta moment sees an avatar attempting to beat an old-school Atari game – we watch people watch him play a game within a game. But for all these wry touches, Ready Player One never truly undercuts or interrogates its characters’ obsessions.

One major sequence sees Wade and his friends searching an OASIS recreation of the Overlook Hotel from The Shining. The typewriter, creepy twins, Room 237, blood elevators, and door-breaking ax all make appearances, but there’s no indication of any understanding of the movie’s ideas, either on the part of the characters or the filmmakers. It’s just a fun setpiece. Ultimately, Ready Player One affirms the escapism of pop culture and the internet, validating their potential for forming bonds between people. Which would possibly be alright, except like the book, it doesn’t delve into why people like the stories they do, what specifically speaks to them, other than a vague “Well, the real world sucks.” That the movie accepts this shrug of an explanation and then ends with a plea to the audience to go out into the real world (“That’s the thing about reality – it’s real”) is stupendously ironic.

One could read the beats that jar the tone of the movie as hints that Spielberg trails about, leading those in the know toward an Easter egg of a buried narrative about the dangers of mass cultural escapism – something he himself has contributed to in no small part. But the base reading – that this is simply a straightforward adventure movie playing in this space instead of critiquing it – sadly makes more sense. The small absurdities are the bugs in the system, not features.

Ready Player One is now in wide release.