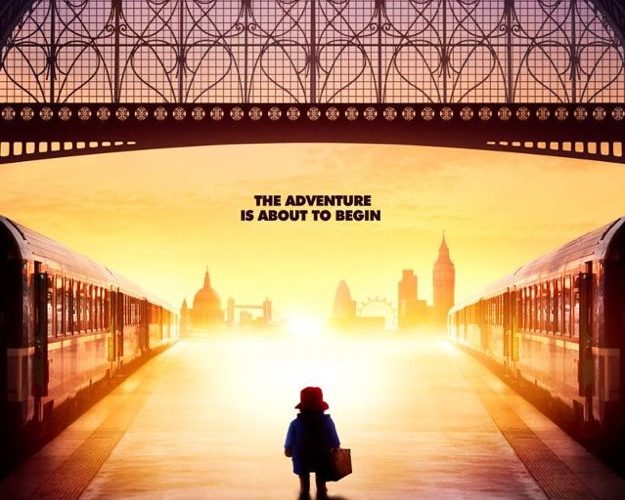 When Michael Bond’s beloved creation Paddington first showed up in children’s books in the 1950’s, he was sitting there in the train station he’s named after, wearing a note around his neck that said, “Please look after this bear. Thank you.” To the surprise and delight of fans of the quirky little, marmalade guzzling bear from Darkest Peru, director Paul King (The Mighty Boosh, Bunny and the Bull) takes that imploring note to heart, and not only looks after Paddington, but celebrates the spirit of his creator with a film that’s both witty and enchanting.

Avoiding the pitfalls that have plagued a number of recent adaptations of classic children stories (Mr. Popper’s Penguins or anything involving Dr. Seuss spring to mind), King’s Paddington succeeds by first capturing the essence of who the bear is to all those who grew up with his stories, and then by placing him in a dazzling storybook world that proves perfect for introducing him to those yet to meet him. It helps of course, that the cast of actors assembled here is about as good as could be expected, and Ben Whishaw—taking over for Colin Firth—evokes perfectly the naiveté and gentle curiosity of Paddington, aided by visual effects that while not photorealistic, are somehow more convincing because of their fantastical air. King, who established an combo of droll wit and stylish whimsy with his first big-screen feature Bunny and the Bull, draws on that playful sense of imagination to furnish a world that feels big and new and yet, comfortable and well-worn at the same time, not unlike that durable hat Paddington’s always hiding marmalade sandwiches in. The marmalade—sometimes functioning like Winnie the Pooh’s honey, sometimes like Popeye’s spinach—and the hat are established in a clever and transporting opening scene, detailing a British explorer’s first encounters with talking bears in Peru via grainy old newsreels. King then splashes color all over that archival black-and-white, showing us the magnificent home amidst the trees that young Paddington shares with his Aunt Lucy (Imelda Staunton) and Uncle Pastuzo (Michael Gambon), the two bears the explorer ran into all those years ago.

Picking up his love for marmalade from them, as well as a mastery of the English language thanks to a gramophone left behind, Paddington eventually finds himself whisked far away from Darkest Peru—due to events beyond his control—and sitting there in the train station in London, where he’s happened upon by the Brown family. All of this is several years after the explorer’s visit to Peru, and Paddington enlists the Browns help in finding the man, possibly the only person in London who might know how to help, or care for, an accident-prone talking bear with a sweet-tooth. Of course, this being a family picture, Paddington really focuses on just how the Browns themselves come to care for an outsider to their own established chaos, and what the familiar and for-granted must look like to new eyes who have never seen them before. The original stories were little more than series of colorful and comical sketches that followed Paddington’s search for a home and family, with minor misadventures on the side that relied heavily on slapstick and warm, witty British humors. The film wants for more of a through-line, and a traditional structure, so it cobbles together a kind of caper movie that furnishes Paddington with an unnecessary villain in museum taxidermist Millicent (Nicole Kidman) who, creepily enough, is overjoyed to find a talking bear so she can silence and stuff it and put it on display. No, this film does not require that kind of character or darker undercurrent, but it’s handled about as well as can be expected, and is more of a minor detour than a major distraction.

It’s the characters that matter in Paddington, and they believably react and relate to each other in this fanciful microcosm that has been created for them. The script is fairly straight-forward for this sort of thing, with the Browns playing out the usual foibles and drawbacks that a movie-world nuclear family has prior to being renovated by some extraordinary creature or the other. It’s the nuances created by King’s direction, and the gracious energy of the cast that transform the film and make it something of a minor gem in the January dumping grounds. Hugh Bonneville, the consistently uptight Lord of Grantham at Downton Abbey, appears here as the casually uptight patriarch Mr. Brown, who refreshingly casts off the lot of misunderstanding, overbearing father to join in on Paddington’s many shenanigans, one of which may overreach a bit by getting him into maid’s drag. Sally Hawkins is delightful as his big-hearted artist wife, whose own excessive sense of personality has transformed her home into a living gallery that any illustrator could be proud of. Her rapport with Whishaw’s Paddington is an understated cornerstone of the picture, building a parental warmth there that children will pick up on and glean to. The Brown kids, played by Madeline Harris and Samuel Joslin, are the requisite restless moppets struggling in their parent’s sometimes suffocating embrace, but they don’t overreach and have genuine chemistry with Paddington, which is impressive considering his cgi nature. In fact, one of the biggest compliments I can pay the film, is that although it’s obvious he was created by employing them, Paddington himself never comes off as special effects. He’s a real character, as ‘there’ as any of the others, and so much of this is down to Whishaw who blesses him with a kind of mildly alien sensitivity. He’s well-meaning but a bit out-of-his-element, and both facets come through here.

There are other faces here that also lend a hand in drawing out this textured fairy-tale universe, including Peter Capaldi as a classless neighbor who finds himself unwittingly aiding Milicent, and Jim Broadbent as an antique shop owner who shares a certain kindred immigrant spirit with Paddington. They have been carefully grafted onto a film whose overall identity is one of quiet wonder, and it’s not often that a live action film is so willing to deliberately court the more eccentric corners of a child’s imagination. There are shots and moments in this film—the visit to the Explorer’s Guild as well as that last madcap chase through the museum—that remind of Wes Anderson, although there’s also an innocence and simplicity that’s fitting for the younger crowd. Paddington may show up in that train station, looking like a furry charity-case, desperately wanting to be cared for, but any audiences willing to take him in will learn the same thing the Browns do; this bear is worth it.