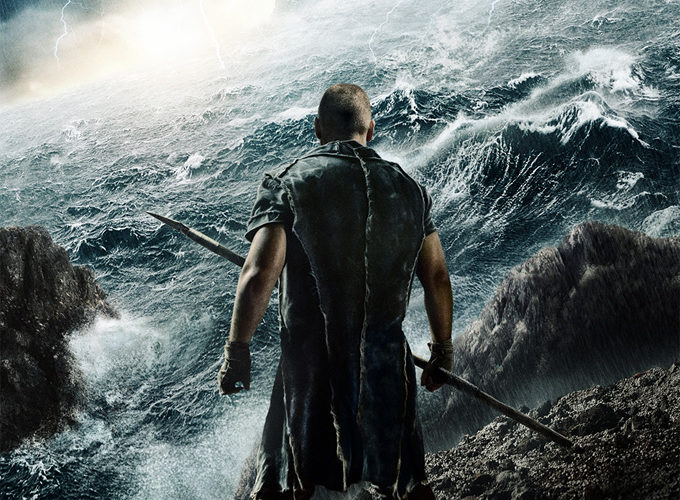 Growing up a wee Baptist lad, the biblical account of Noah and his ark always seemed to me an unlikely candidate for cuddly Sunday School lessons. Nonetheless, the popular image of Genesis’ righteous pillar of faith who garnered God’s favor when all around were deluged in the Almighty’s justice has always been one of chipper, storybook fantasy; a white-bearded Wilford Brimley-esque patriarch piling his nuclear family on a big, gaudy boat that’s essentially a floating zoo. It’s telling that the scene most kitschy art pieces tend to focus on is the white dove hovering above the ark as Noah smiles into breaking storm clouds. It’s not very often that you see a needlepoint sweater depicting the sanctioned, mass drowning of all humanity.

Never one to balk at troubling the waters, Darren Aronofsky dives into the story of Noah with all of the tumultuous, spiritual curiosity that has defined his career, particularly more contemplative adventures like The Fountain and Pi. From the religious faithful to the film faithful, devotees from every corner have been paying special attention to this big-budget experiment, and while it’s certain to be a divisive film, the arguing points may not be the expected ones. For those who scan through reviews looking for a quantifiable rating, a word of warning; I’ve arrived at no firm consensus yet on Aronofsky’s latest, and have yet to fully digest all of the ideas and imagery that he’s jammed, two-by-two, into this particular vessel. I suspect the movie to grow in my esteem, but take the rating for what it is, a recommendation that Aronofsky has made a film worth seeing, processing and discussing, regardless of where you fall on it in the end. A dark and dense extrapolation of the slender origin, Noah feels like no religious epic we’ve seen before, and while this certainly may cause some confusion or consternation among some audience members, it’s ultimately a welcome quality. A straightforward and by-the-numbers Hallmark telling of Noah wouldn’t generate as much curiosity, draw as much artistry or inspire as much thought as Aronofsky’s fractured, sometimes bloated, but fascinating epic does. This is not a quick cash-grab or a reckless desecration of a faith-based story, but a soul-searching adventure that takes its central character–and by extension, his faith–seriously. That aspect alone makes it more refreshing than dozens of other Hollywood biblical projects.

From a visual perspective, Noah is a much different beast than your usual Bible adaptation. Aronofsky establishes this world as one poisoned by sin and wickedness, beginning in the human heart and eventually infecting and spoiling the natural world of God’s creation. Cinematographer Matthew Libatique’s camera renders Noah’s landscape as one ravaged by cataclysm; the mud-smeared denizens of a barren, craggy land remind of the post-apocalyptic melancholy of Cormac McCarthy’s The Road. Russell Crowe’s Noah isn’t a smiling geezer, but a decent man troubled by images of death and destruction, an ecologically minded salt-of-the-earth farmer who’s more likely to protect God’s natural wonders than his fellow human beings. Against welcome strains of realism that pull the concept of the Ark and its animal cargo out of the mists of absurdity, is another, more fantastical texture that may be the biggest superficial sticking point for purists.

Most likely done for reasons both financial and artistic, Aronofsky’s Noah has been structured to feel like something more worthy of Tolkien than Sunday School, taking smaller, mostly overlooked aspects of the original text and merging them with apocryphal writings to  achieve a tone of dark fantasy. The biggest culprits here are The Watchers, a race of fallen angels that were cast out of Heaven and punished by God for aiding the descendants of Cain in scourging the land. After a spectacular scene documenting their fall, the offending angels are swallowed by the Earth they crash into, covered in rock and dirt and becoming stone giants that grumble and groan against their exile. These Watchers, initially enemies of the just, eventually team with Noah to protect the Ark from villainous Tubal-Cain (Ray Winstone), in hopes of earning a measure of redemption from the Creator they spurned. Aside from the infamous flood itself, Aronofsky folds other supernatural touches into the film, including the shamanistic presence of Noah’s grandfather, Methusaleh (Anthony Hopkins) whose God-derived powers include incinerating armies with flaming swords, and more gently, helping a barren woman conceive. These elements do not reduce the scope or emphasis of the tale, but help in restoring God as a central point of the narrative without the need for bombastic Almighty voice-overs or ethereal lights. The Watchers themselves are early examples of the Creator’s majesty and wondrous invention, they drive home the miraculous elements of the story much better than the unconvincing gathering of the animals, which mostly resembles a moving pop-up storybook. Later, these angelic rebels bear testament to His mercy amidst judgment, although their battle with Tubal-Cain’s men isn’t as powerful or startling as some of Aronofsky’s other visual inventions.

Chief amongst these are Noah’s terrifying dream visions, that explicitly present the toll of cleansing the world of man; a sea of pale, staring corpses languishes beneath the waves and blood spills up from the very ground around Noah’s feet. To contrast the terror and dread, there’s also a mind-boggling scene of the Creation story, as told by Noah to his family. In a sequence that recalls The Tree of Life, we see the six days of Creation told in time-lapse photography as a presentation of traditional evolutionary theory overseen by a divine hand. From a technical and stylistic standpoint, Aronofsky has never painted with a larger brush, or achieved such grand wonders. It must be said though, that with a much smaller budget, The Fountain achieved longer lasting mystery and majesty.

All of this talk makes Noah sound like a special effects picture, and to some extent it is, but what cements the film as another admirable notch in the director’s belt is its character-driven nature. Crowe gives one of his best performances here, making Noah’s reservations and doubts about his mission as dynamic and expressive as his convictions and determination. There’s an unexpected darkness to this interpretation once the flood itself hits, captured in a bravura display of filmmaking which is both breath-taking and frighteningly poignant. We see victims as well as enemies pried off of rocks as the sweeping waves crash upon them, and can hear the screams of the condemned from inside the safety of Noah’s ship-shape stronghold. Jennifer Connelly’s Naameh holds her own with Crowe, especially when her husband begins to extrapolate his own addendum to God’s plan. The film’s final third is both its most compelling, and its rockiest. Some of this is down to Emma Watson and Logan Lerman, who are fine as Noah’s progeny, but never quite register the same terror or recognition that are nakedly displayed on the faces of Crowe and Connelly. Clint Mansell’s score is powerful, but many times it’s too similar to The Fountain, and too concussive when it should be shadowy and minimalist.

Themes of madness and redemption, vengeance and mercy are played out in a manner familiar to Aronofsky fans, and the movie inside the Ark—a magnificent creation in its own right—is very different from the one outside of it. Here the blockbuster elements recede and we are left to face the darker corners of the story. What does listening to the Voice of God look like? How does mercy and love affect our view of justice? When does faith, corrupted by our own failings, verge on madness? These have been the questions of sermons and philosophical discourses for ages, but they are rarely the kind of content that rears its head where mainstream religious film-making is concerned.

Noah isn’t perfect, but in its flawed, trembling beauty it’s more interesting than much of Hollywood’s recent tentpole output. For the faithful, it’s a serious exploration of a Biblical chapter they likely know by heart, giving opportunity to see its intricacies from a different angle. For all others, it’s a worthwhile example of imaginative, assured filmmaking that takes risks and rides the waves of its own conviction over the rough, damp spots.