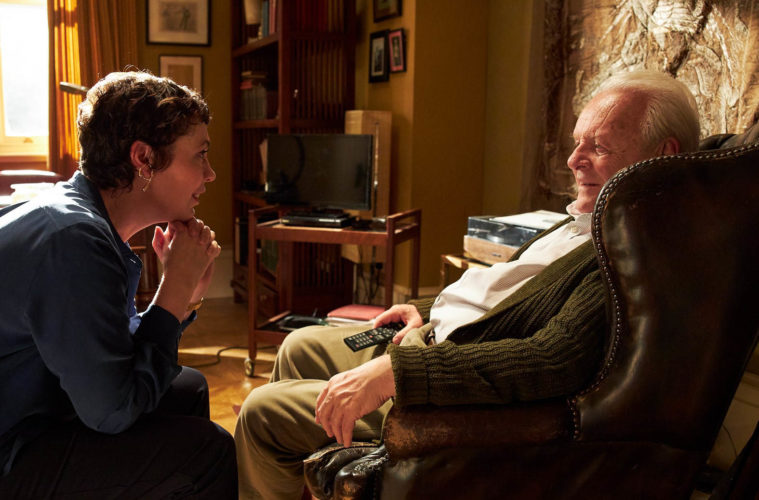 Directed and co-written by Florian Zeller from his own play, The Father doesn’t have much visual flair. It’s a first feature, largely takes place in one apartment, and centers on two characters. Its most consistent motif being frames within frame: doorways lead to hallways and corridors; paintings domineer rooms like portals to a world half remembered. Scenes, sequences, and arcs fray at the edges until they snake in on themselves. But for a movie as low-key movie as it is quietly brutal, this may have been the most fitting choice.

It’s a simple premise: Anthony (Anthony Hopkins) is an elderly man living in his London flat. Well, it seems so at first—then comes his daughter, Anne (Olivia Colman), who makes mention of it being her apartment. Her husband, Paul (Rufus Sewell), comes in and she mentions the two moving to Paris soon. But wait: that means he’ll be alone with a new nurse, given how he drove the previous one away with his temper. A few scenes pass and Anthony mentions it again, at which point Anne says no such thing is happening. Clearly his mind is going.

But to say that The Father is a simple drama would be cutting it short. It’s something of a pressure cooker as Anthony’s perception of the world further unravels. Small things appear time and time again to give the story a studded, pointedly insignificant texture, like a lost mind trying to assign motifs to his passing days. Characters come and go like specters, their personalities bleed into one another. When the apartment seems to shift and scenes go from A to B and back to A, it can get quite unsettling.

Of course, that’s not to say Zeller has crafted a disturbing film. It’s his ability to link language with location that toys with the audience. One such device—and smartly used, better yet—comes in the form of Anthony’s new nurse, Laura (Imogen Poots). What he insists is a spitting image of his other daughter both deepens the chip on his shoulder and gives a deeper insight to his past. It can be tricky spending so much time with such an abrasive character, but it’s Hopkins who conveys the insecurities and frustrations bubbling to the surface.

Similar praise goes to Colman too, what with her strong work in internalizing her emotions. The two performances show themselves as increasingly complementary as well, what with Hopkins’s confusion and Colman’s shifts between what may or may not be illusions of Anthony’s mind. It largely comes back to Zeller and Christopher Hampton’s script, which flirts with a medley of points of view without clarifying itself until the end.

Those two facets are what help distract from The Father’s stage origins. It’s quite obvious at times, but that isn’t to say it’s a strictly bad thing. Ben Smithard, who seems content at this point shooting interior-based films like Downton Abbey and Belle, gives a cold sheen that evaporates at key points in the picture. Zeller makes good use of these choices too, leaning his camera in and out of windowsills and towards or away from characters. It helps make it feel a bit more involved than it is.

Some moments of the script seem to flirt with Anthony’s chauvinism as a defense mechanism, but they can either come off as comical or plainly coarse. Other foibles, like how he interchanges the women around him at times but never the men, don’t entirely coalesce. Is it a wrinkle in terms of how he sees gender, or does he find it easier to empathize with those carrying a similar identity? Part character study and part family drama, it’s parts like these that give viewers something more to chew on despite feeling slightly unintentional. Maybe that’s okay. For a movie that follows a character’s perspective while remaining aware of his shortcomings, The Father marks a modest and involved debut from Zeller.

The Father premiered at Sundance Film Festival and will be released by Sony Pictures Classics.