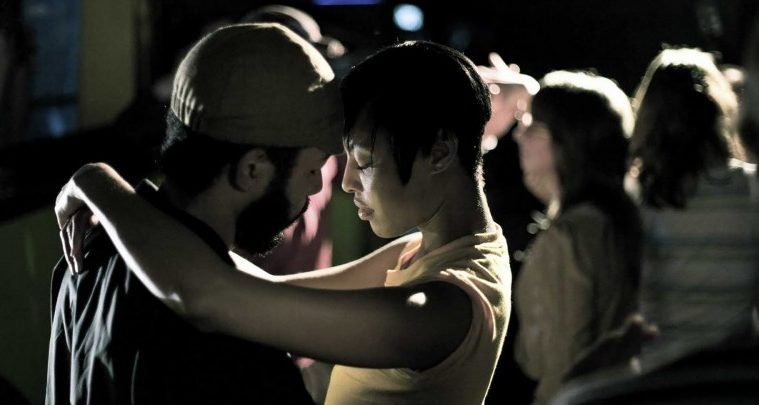 In the Taliban-controlled Afghan city of Kabul, Nora Twomey’s debut film as sole director (she co-helmed Oscar nominee The Secret of Kells) depicts an eleven-year old girl facing the futility her future inevitably holds. Adapted by Anita Doron from the award-winning novel by Deborah Ellis, The Breadwinner delivers a heart-wrenching coming-of-age tale within a nation that’s lost its way. The shift was virtually overnight once the Taliban took over: women forced under hoods and trapped in houses, photographs and books outlawed, and men turned cruel as “protectors” of an extremist interpretation of a peaceful religion. The city’s former glory is immortalized only through stories of those who still remember. And as they perish to be replaced with new generations raised in hate, the past risks being forgotten forever. – Jared M. (full review)

As the ice flows thaw in the 24-hour daylight of a northern Norwegian summer, so too does the relationship of a father and son in Thomas Arslan’s Bright Nights, a consciously meditative but rather straightforward three-act road movie that takes just the bare minimum of plot points along for the ride. Combining an ambient use of imagery and music with a simple and sparse approach to dialogue, Arslan’s seventh feature as director might remind the viewer of the work of a small group of American independent filmmakers who broke out in the mid-to-late 2000s who were, at the time, collectively referred to as the neo-neo-realists by New York Times critic A.O. Scott. Indeed, you can see much of the work of Ramin Bahrani and Kelly Reichardt on display here, though, crucially, not their most profound gift as filmmakers: being able to divulge a great deal about a character’s subconscious with the briefest of glances or the most seemingly innocuous line of dialogue. – Rory O. (full review)

The Room, a film produced, directed, written, and led by “entrepreneur” Tommy Wiseau, was supposed to be his grand artistic statement. What turned out instead was what many consider to one of the very worst movies of all time. In the years since 2003, however, the result was so bad that it has transcended genres to become a cult disaster comedy. The film was so fascinatingly inept that it seemed too good to be true. Were Wiseau’s intentions genuine? Did he really set out to make a good movie? The answer, we found out, was, quite certainly, yes. And that added to the allure and charm of the picture. In depicting its creation with The Disaster Artist, a love letter to bad cinema, James Franco has now created Ed Wood for the 21st century. – Jordan R. (full review)

Mild, existing vestiges of its star’s “mumblecore” origins and its director’s acidic social preening are ultimately rejected in Frances Ha, a film that shows itself to have more kinship with the likes of Woody Allen’s Manhattan. (The black and white cinematography set amidst New York City being a bracingly obvious touchstone.) In its spirit, an alternately loose-limbed and tight-wired current runs through the Noah Baumbach-Greta Gerwig picture, thanks to an inextricable bond between image, script, and performance: the camera casts a patient glance on people in apartments, subways, bars, and restaurants, capturing the casual doling out of personal revelations which, set over a brisk 80-or-so minutes, accumulate into the portrait of human beings that is often painful but, somehow, always an undiluted pleasure. – Nick N.

Into the Abyss (Werner Herzog)

A film has rarely faced death with such a delicate touch as Werner Herzog’s Into the Abyss. More compelling and satisfying then his other over-praised documentary of 2011, the erratic filmmaker takes a single death row murder case and extends his grip on every human being touched by tragedy. Whether it is a heartbroken, jailed father who knows he is at fault for his son’s reprehensible actions, a former death row worker whose job was eating away his soul, or a young man who has made peace with death, the chills down my spine as I type this confirm Herzog has made a permanent impact. – Jordan R.

Branagh, a thespian well-known for capturing Shakespeare adaptations on-screen (Henry V, Much Ado About Nothing, Hamlet) is a wise choice to tackle Christie’s Poirot, especially given his knowledgeable background in both literature and stage. However, the results are mixed at best, encompassing both what is great about Branagh as a director, but also his weaknesses. – Jordan R. (full review)

Eight years before his Best Picture-winning Moonlight, Barry Jenkins debuted his first feature with Medicine for Melancholy. Produced on a budget of less than $15,000, it followed Wyatt Cenac and Tracey Heggins as a couple in San Francisco and featured cinematography from James Laxton, who would reteam with Jenkins. Fans of the film in the years since its premiere knew to anticipate whatever the director would be doing next; for everyone else, it’s prime time to discover the filmmaker’s early work. – Jordan R.

Setting a film in the future and casting as its protagonist a man with a disability is a quick way to propose a deeper thematic meaning in a narrative. Layering a lifestyle choice on top of that disability, further alienating your main character from the world around him, would only further serve that impression. Any film set in the future is assumed to be saying something about our present through the world it represents, and a disabled character is almost always a way to tell us something about ourselves. Anyone expecting such seemingly inevitable thought-provoking angles from Mute, however, should be warned—no such depths are attempted in this slight, circuitous film. – Brian R. (full review)

Written and directed by Maggie Betts, Novitiate is a rare behind-the-scenes look in a pre-Vatican II (1962) convent in the 1950s and 60s at a time of extreme social change. The equally harrowing and frank Novitiate, like Martin Scorsese’s Silence, is about the dangerous consequences and ends in which those that have heard the calling are willing to go. The drama traces the journey of Sister Cathleen, played in a star-making turn by Margaret Qualley (The Nice Guys), an America teen from a troubled family who attends Catholic school and becomes enchanted by the notion of an otherworldly love. – John F. (full review) I’d like to know the regulations for automobile tires in Russia because Dmitrii Kalashnikov’s dash-cam compilation documentary The Road Movie has too many violent fishtails and gravity-enforced overturns to not have its audience infer the country as being riddled with bald tires. Some incidents occur in snowy conditions, but others don’t. Speed surely plays a factor alongside a weirdly calm yet psychotic form of road rage too, but the numbers are still too high to ignore. He probably could have filled the entire 67-minute runtime with these accidents if doing so wouldn’t inevitably get old fast. You can only watch so many examples of the same type of tragedy before growing bored of the monotony. The drivers’ vocal commentary helps, but Kalashnikov knows he needs to raise the stakes too. – Jared M. (full review)

The Kiwi helmer makes the ideal move from the start: clearing the playing field of any excess baggage. He bulldozes the Shakespeare Lite-turned-Game of Thrones tone of the previous installments to pave the way for his off-kilter wit and bonkers fixations. The thunder god (Chris Hemsworth) returns to Asgard to find his not-so-dead brother, Loki (Tom Hiddleston, squeezing a few more charms out) masquerading as their father Odin (Anthony Hopkins), cackling at a play depicting his own death (that features a few delightful cameos). In literally reducing the events of The Dark World to a farce, Waititi announces his intentions to treat this franchise with all the goofs and weird Jeff Goldblum-ing it deserves. – Conor O. (full review)

Bluebeard
The Films of Luis Buñuel