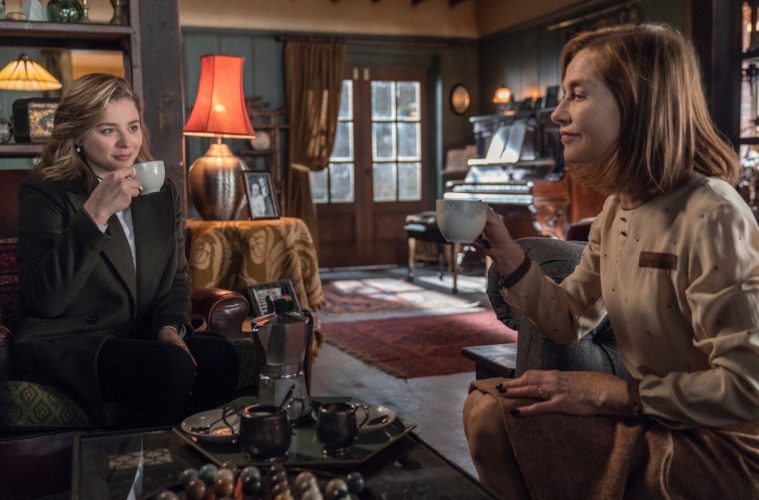 Over half-a-decade after his vampire drama Byzantium, Neil Jordan returns to filmmaking with the psychological thriller Greta. In his six-year absence, he created TV series The Borgias, but the prospect of directing Isabelle Huppert as Greta was too good to pass up. The part was redesigned so Greta would become a sophisticated older woman who used her worldliness as means of seduction. Chloë Grace Moretz plays Frances, Greta’s newest victim, and Maika Monroe plays Frances’s roommate Erica who doesn’t trust Greta from the start.

We interviewed Jordan about Huppert’s truthful and therefore believable performance as Greta, working with cinematographer Seamus McGarvey to create an intimate and claustrophobic palette for the story, and how a dream sequence helped him decide this should be his next film.

The Film Stage: At the beginning of the film you think Greta’s a lonely widow, and her tone and demeanor make her appear trustworthy. Even as she dips into madness later in the film, Greta has this refined elegance, which makes it funny when she dances around Stephen Rea’s body.

Neil Jordan: Isabelle didn’t tell any lies in any aspect of her performance. Look at what she did in the first encounter, when she’s drinking coffee and playing the piano. All of the little nightmares are implicit in that one scene. She plays it very sweetly and realistically, but as an actress, everything that Greta becomes is implicit in that scene and that’s how brilliant Isabelle is. It was important that the character be believable. I didn’t write the script myself; I rewrote the script and if you start with a simple encounter over a returned handbag and want to end up with somebody bound to a bed in a hidden room, you have to make that journey. You have to make it believable in a psychological way and that was very important to me and was very important to Isabelle as well. The refinements with which she attracts Frances at the beginning of the movie are still there toward the end. I mean, all she wants is a daughter who she can teach to make those damn Hungarian cookies. [Laughs.]

Frances is looking for a mother figure and Greta is looking to be a mother figure. It’s not overtly sexual, but the whole mother/daughter aspect is interesting because in gay culture, if you’re in a relationship with an older man, there’s this idea that he’s a “daddy.” People don’t come to that conclusion right away when they see younger women in relationship with older women, even though the psychosexual dynamics are similar. If this were a movie about an older man and younger man, right away people would say the older man is gay.

It’s kind of more interesting to explore motherhood than fatherhood in a way, because father figures are very familiar and very explored but perhaps mother figures not as much. I would say motherhood is a great maelstrom of psychosexual problems and issues. I thought that was at the heart of this movie in some way.

What attracted me to the movie was that it was two women. It wasn’t for the obvious reasons, not as a calling card for feminism. The character of Greta was much more terrifying because she was a woman. Had it been like an Anthony Hopkins figure, the sexual dimension would have been so obvious and so immediate that I would probably leave the theater. The fact that it’s this refined woman that wears the same clothes Nancy Pelosi wears is both more ambiguous and slightly more believable and actually more terrifying. I didn’t want to make it overtly sexual; it would have been very simple to go that route, but I thought the neuroses and psychosis were more interesting if they were trying to fill this great hole we call motherhood. I thought it was more terrifying to tell a story about someone who says, “You promised to be my friend.” It’s more spooky and has all the sexual undertones.

Looking at cinematographer Seamus McGarvey’s work in the last 10 years, he works with large palettes and locations. Greta creates a more intimate and claustrophobia image than we’re used to seeing from him he’s creating.

I’ve known Seamus for many years and we never managed to work together. We tried once or twice. I asked Seamus to do Byzantium, but he got double booked so I ended up doing it with Sean Bobbitt, who was equally great. But he was happily available to do it this movie, which was brilliant. The first thing that dictates what a cinematographer does is what the film is about, and in this case it was about the alienation of the big city. It started out with quite a large palette until it shrank and shrank and shrank and ended up in a box. We looked at several movies together, we looked at Repulsion, we discussed quite a few silent movies, palettes and looked at photographs.

Seamus has an incredibly lively brain and passionate about delivering the image we spoke about. It would be quite marvelous actually. We had some conversation but, shooting that piano and shooting inside the piano, doing technically difficult shots in a very old-fashioned way. When we came to shoot those shots, Seamus already got these really telescopic lenses to get inside the box and we had to get inside with Chloe and inside the piano with the hammers hitting the keys. We also had a great operator, Alastair Rae. Seamus recommended Alastair become a part of this team. Seamus’s commitment to the fact that we were making a film that starts naturalistic and gradually becomes more shadowed and the light and shade becomes much harsher. He stuck with that rigorously and delivered it.

When Greta is looking at Frances’ Facebook, a musical cue gives tells the audience something is up. How do you toe the line between directing the audience with music and surprising them simply by letting the story unfold?

I think surprises are becoming increasingly difficult in the movies, aren’t they? I didn’t want to tell a lie in this film in the development of the characters and all that. I didn’t want the filmmakers to be ahead of the audience and I didn’t want to be lying to the audience. It’s a very simple thing to do really. I felt it was important to let the audience share in the journey. We don’t know the full extent of the horrors Greta can unleash. We see a little when Greta pretends to not know how to use the phone, which everybody’s mother does at some stage. But then we see her scrolling through Facebook. You know there is many more depths and dimensions to this woman than she is presenting to Frances.

When Frances is drugged and taken to Greta’s home, she has two dreams. Both times the audience thinks they’re back in reality, and both times they’re dreams. But it’s interesting because her dreams are about real things that happened to her and I found it quite disorienting.

That was in the original script. There were two things that attracted me to the original script. One was the little hook of the handbags, and the other was the double dream. I mean, we’ve all gotten drunk and said the wrong thing and woken up and said, “Ah I hope I dreamt that. I hope I didn’t say that wrong thing.” It’s a very familiar experience to me. Now, that was presented very cleverly in the script. But I didn’t want to present them as Dali-esque dreams with wobbly camerawork. I wanted to present them as actual facts. Frances wakes up in a box and wakes up with horrible feeling that she was drugged, and sure enough she has. I thought it was a very clever narrative device.

Greta is now in theaters.