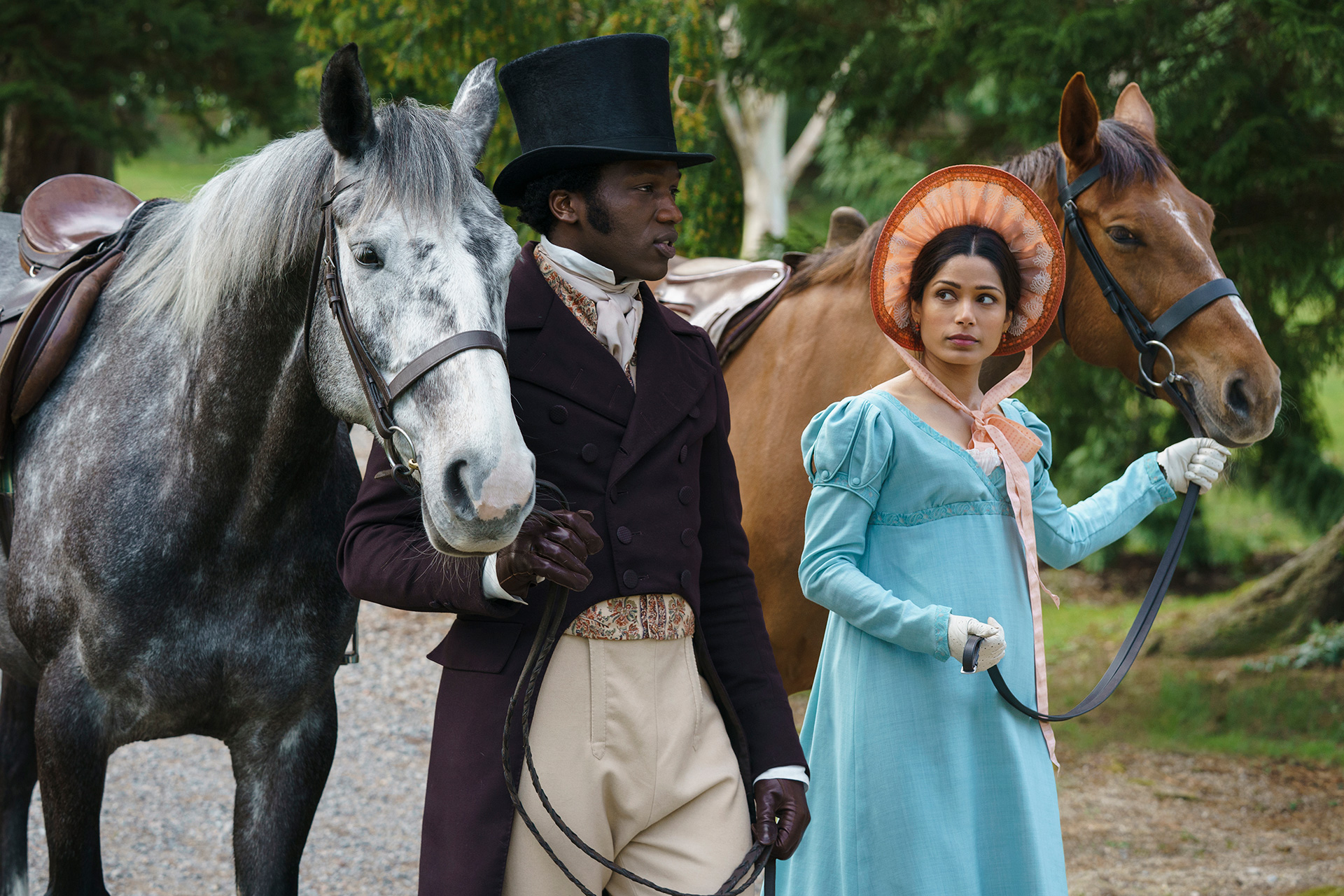 Hearing that author Suzanne Allain originally set her idea—a bachelor utilizes an impossible list of criteria to find the “perfect” bride in modern day—before realizing the farcical nature of the conceit was better suited for the Jane Austen 1800s made me laugh. Because it’s so true. She talks about the era’s “all-consuming” nature of finding a suitable match for both genders and uses Fitzwilliam Darcy from Pride and Prejudice as an example of someone who might be so arrogant as to treat love like a horse auction, assuring himself that whomever he chooses wouldn’t be interested solely in his money. Which is exactly why the Honorable Jeremy Malcolm (Ṣọpẹ́ Dìrísù) says he’s doing it: he couldn’t dare admit it was out of fear.

The journey from conception to theaters took director Emma Holly Jones hearing Allain read her screenplay on the Black List podcast before collaborating on a short film proof of concept (with all actors but one carrying over to the feature) that gradually won enough interest to both publish a novelization and finance the film two years later. It’s not often a period piece of this nature is greenlit without a brand-name source—Austen adaptations and reimaginings conversely have little trouble; see Fire Island and Persuasion in 2022 alone—but it’s even harder considering the “colorblind” nature of the casting, à la Armando Iannucci’s The Personal History of David Copperfield. Once you experience Mr. Malcolm’s List for yourself, however, you won’t be able to imagine it any differently.

Rather than meet Malcolm, Allain and Jones introduce Selina Dalton (Freida Pinto) and Julia Thistlewaite (Zawe Ashton) first. The latter’s London socialite and the former’s Sussex daughter of a clergyman met in school and vowed to stay friends forever. Such wishes are easier for Selina, constantly writing letters and remembering the fun they had while serving as caregiver to aging women on their deathbeds. Julia treats it more as a lark, basking in the attention that receiving all those letters provides, despite writing back only a fraction of the time while struggling to find a suitable match with any number of Lords around town. This romantic pursuit finally forces Julia to invite Selina to the city, desperate for an accomplice in revenge.

Malcolm has already grown a reputation as a man of “discerning tastes” before escorting Julia to the opera. It’s the kind of gossip and buzz that gets people talking about the women he chooses to date and crucify them upon rejection. But what he believes is an honorable act (silently ending his potential courtships so as not to lead the women on and ruin his good name as a flirt) isn’t quite agreed-upon by those he discards. Not only must Julia feel the scorn of being so unceremoniously dumped—she’s also the unfortunate soul caught in his sights when the media’s publicity machine catches wind. The joke of Malcolm’s affairs hits newspapers; Julia is comically dismissed as his latest “lost cause.” It’s akin to murder.

To then discover the aforementioned “list” by way of her cousin Lord Cassidy (Oliver Jackson-Cohen) only makes matters worse—it reveals Julia never had a chance. As soon as she fell into one of his manipulations and failed to check another trait off his criteria card, she was merely stuck on the line until he could shake her loose. She should be furious. Even Cassidy laughs at his friend when he admits his ploy (although he does wonder to himself if there isn’t something to it). When Julia is but an unmarried woman four seasons past society’s idea of her “prime” and Malcolm is the biggest prize on the thoroughfare, retribution is impossible. Unless she cajoles Selina into giving him a taste of his own medicine.

Anyone familiar with the genre knows such a ruse must backfire into supplying true love, but don’t think its inevitability will ruin the fun. We’ve yet to meet the dashing Captain Henry Ossory (Theo James) or loquacious pariah that is the widow Covington (Ashley Park) and how relations and coincidences arise to twist and tie fiction and truth in knots all around the board. Jealousies abound, both with the men vying for Selina’s attention and Julia herself upon realizing the game she’s playing is only showing how she was perhaps the problem all along. The former adds laughs, the latter delivers the messy melodrama we need to spark an inevitably explosive finale wherein everyone must drop the cards up their sleeves.

Script and production are impeccable, but I can’t say enough about the cast’s dedication to bringing both to life with an electric wit and resonant introspection. Ashton (who replaced Gemma Chan from the short) and Jackson-Cohen are perfectly attuned to the mix of self-deprecation and cluelessness necessary for keeping these cousins likable despite them being intellectually and culturally under-matched when compared to the rest. I don’t think I’ve ever seen James better, his good-natured charm shining through Ossory’s chivalrous yet confidently biting demeanor. And Pinto and Dìrísù brighten up the screen whenever they’re together, her Selina being all the things that truly matter to open his Malcolm’s eyes to how childish this whole endeavor was from the beginning. Pride might still destroy it all, though.

It always does, right? Anger and entitlement always push those who should be happy for the people they care about into hurting those people instead. It blinds them from what’s right in front of their face; all they see are the assumptions and prejudices they’ve deluded their minds into believing as inalienable truths. That’s not to say some of those defense mechanisms aren’t warranted. At a certain point, however, one must be willing to endure failure to find happiness. Hurting others only feels good in the anticipatory build-up preceding the actual hurting; the aftermath is all guilt and regret. Thankfully, even the most doltish of the bunch can accidentally stumble their way to providing an epiphany. And forgiveness is never out-of-reach.