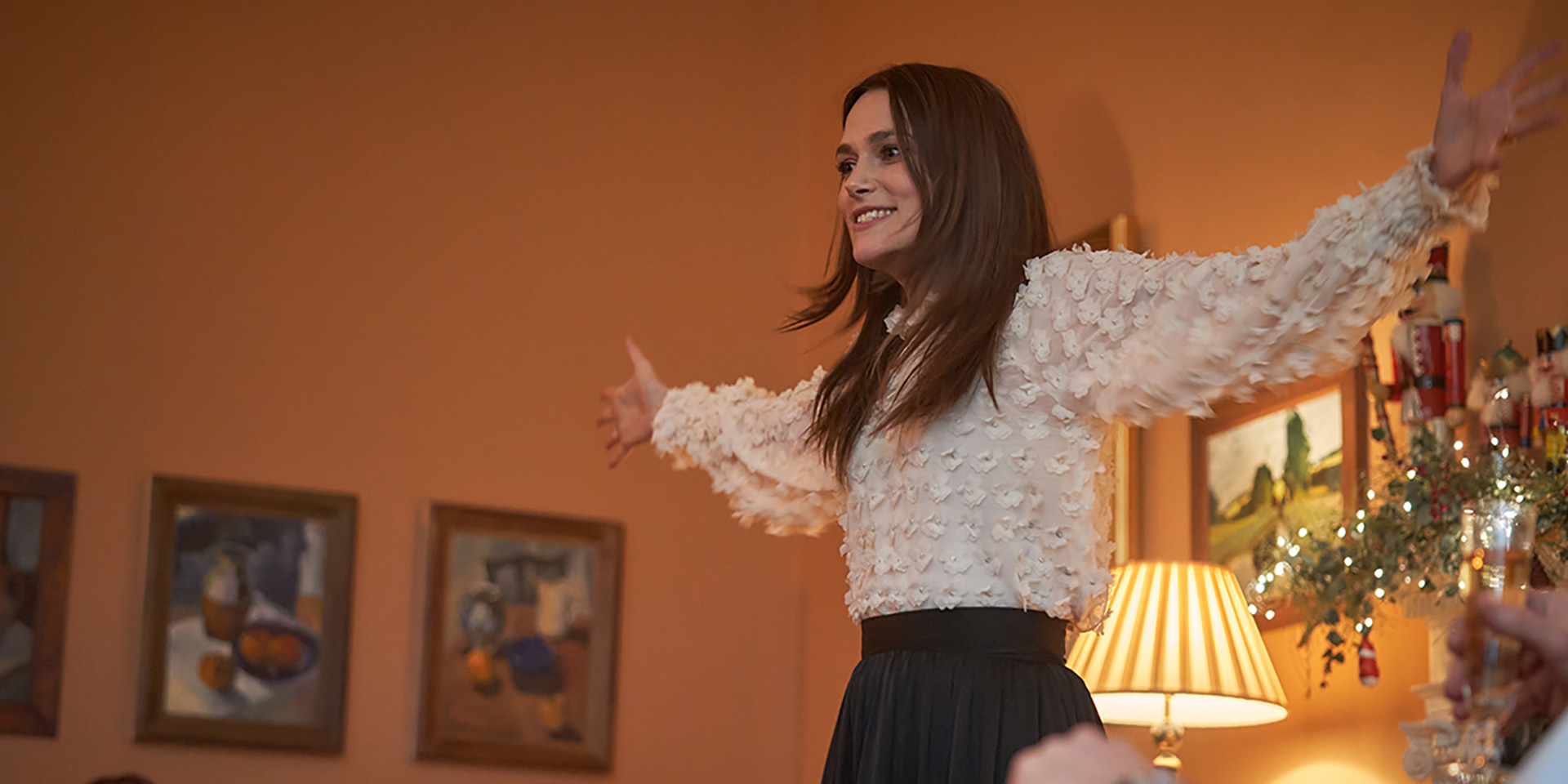 The easiest way to make sure your child actors are up to swearing on-screen is casting your own. That’s exactly what first-time feature writer/director Camille Griffin does for her film Silent Night—and it’s with good reason. Art (Roman Griffin Davis) and twins Thomas (Gilby Griffin Davis) and Hardy (Hardy Griffin Davis) have made a pact with their parents (Keira Knightley’s Nell and Matthew Goode’s Simon) to say whatever comes to their mind without fear of punishment or retribution since they’re all going to die anyway. Rather than some hyperbolic, progressively laissez faire parenting tactic, however, this sentiment is fact. Everyone on Earth is literally going to die. Some already have. Some will soon. And Nell, Simon, and the boys will have their turn tomorrow. On Christmas day.

Grab the wine, steal some pudding, and prepare yourself for the most awkward holiday fun you’ll have in quiet some time. We’re talking young Art staring his parents and their posh high school friends (and the odd spouse who doesn’t check both boxes) dead in the eye to blame them for refusing to listen to Greta Thunberg when she warned the world that climate change was on the brink of killing us all. They’ve tried to keep him away from the television and internet, but good luck accomplishing that in a house that can only afford one cellphone let alone five-plus. Art knows the tornado storm of poison gas heading their way as well as the fact that the NHS has created an “Exit Pill” to euthanize them.

Well. Not everyone. Illegal immigrants don’t get one because they aren’t “real” people according to the system. (As Simon explains, “It’s complicated.”) While these rich couples and their offspring experience a painless death after closing their eyes, other less fortunate souls in Britain (and especially abroad) are left writhing in pain while they asphyxiate. Good on Art for calling “bullshit” then. Don’t let his parent’s generation (and wealth) absolve them of their part in our planet’s destruction. Don’t let them believe they are saving their very young children from the worst suffering imaginable without the reminder that they have already implicitly murdered them and are now explicitly doing it again with a can of Coke and Christmas carols. Griffin has made a comedy, but she pulls no punches.

This is both to the film’s success and detriment because, while a lot of fun in a mainstream It’s a Disaster sort of way, Silent Night is very blunt in its delivery. To its credit, however, it’s not preachy. Art’s refusal to ignore the elephant in the room is less an admonishment than it is a statement of fact. The film is less a cautionary tale than it is a portrayal of the tone-deaf way those who’ve done nothing to even admit there’s a problem now will continue doing so or shift the blame elsewhere without batting an eye. And why not? It’s too late for a last second comeback. Why wallow in your nightmarish reality when you can simply embrace it and manufacture a joyful goodbye instead?

Griffin never confirms as far as I remember, but I’m honestly not sure it even is Christmas at all. We’re talking about affluent, (mostly) vapid souls trying to put on a happy face opposite extinction. Wouldn’t they just pretend for the sake of placating the kids with gifts they won’t even be able to play with? It’s a thought that opens its own can of worms as these friends converge at Nell’s mother’s mansion to remember better times and inevitably dredge up some bad ones along the way. Because if this is the end, why not act on impulses you’ve been too afraid to admit before? Declare love for someone who isn’t your spouse. Get drunk to numb yourself from obvious truths. And tell your bratty kids off.

It’s an impeccably compiled cast of familiar British faces with the acting chops to both earn a laugh and sympathy (even if all but maybe two characters are legitimately sympathetic). Knightley and Goode are the consummate hosts doing their very best not to ruin the façade of ignorance. Annabelle Wallis’ Sandra is a monster of materialism with Rufus Jones as her pushover husband Tony and Davida McKenzie as their Veruca Salt of a demon spawn Kitty. The other two old chums are Lucy Punch’s Bella and Sope Dirisu’s James with their “outsider” partners in Kirby Howell-Baptiste’s Alex and Lily-Rose Depp’s Sophie respectively. The latter two can’t help but earn empathy due to Alex dealing with Bella’s newly unchecked apathy and Sophie being reminded how she’s never quite belonged.

Don’t forget the most important character in the room, though. Choice. Griffin wrote this film before COVID, so don’t read into it as some anti-vax screed even if some of young Art’s arguments for not taking the pill in case the government got it wrong could easily be construed as such. This isn’t about being saved. It’s about government-assisted suicide so as not to die in pain. It’s between certain death and certain death. The choice on-screen is therefore actually about morality unlike the one playing out across the country today. It comes down to the question: Can you willfully kill the people you love more than anyone in the world before also killing yourself? The reality that complacency might have already sealed that fate isn’t a coincidence.

That’s where the real interesting bits come in, though, since humanity is nothing if not a species mired in contradictions. James is an oncologist who knows what’s coming. He’s seen suffering first-hand and understands his oath to save lives isn’t feasible anymore. Sophie might not want to take the pill for the same reason Nell and Simon do, but neither is necessarily wrong or selfish. They’re simply trying to rationally tackle an impossible situation. And yet it all comes back to Art in the end with Roman Griffin Davis following up his breakthrough performance in Jojo Rabbit with another heartfelt and resonant turn that will stick with you no matter your thoughts overall. Maybe the pain is worth the slim chance of riding out the storm.