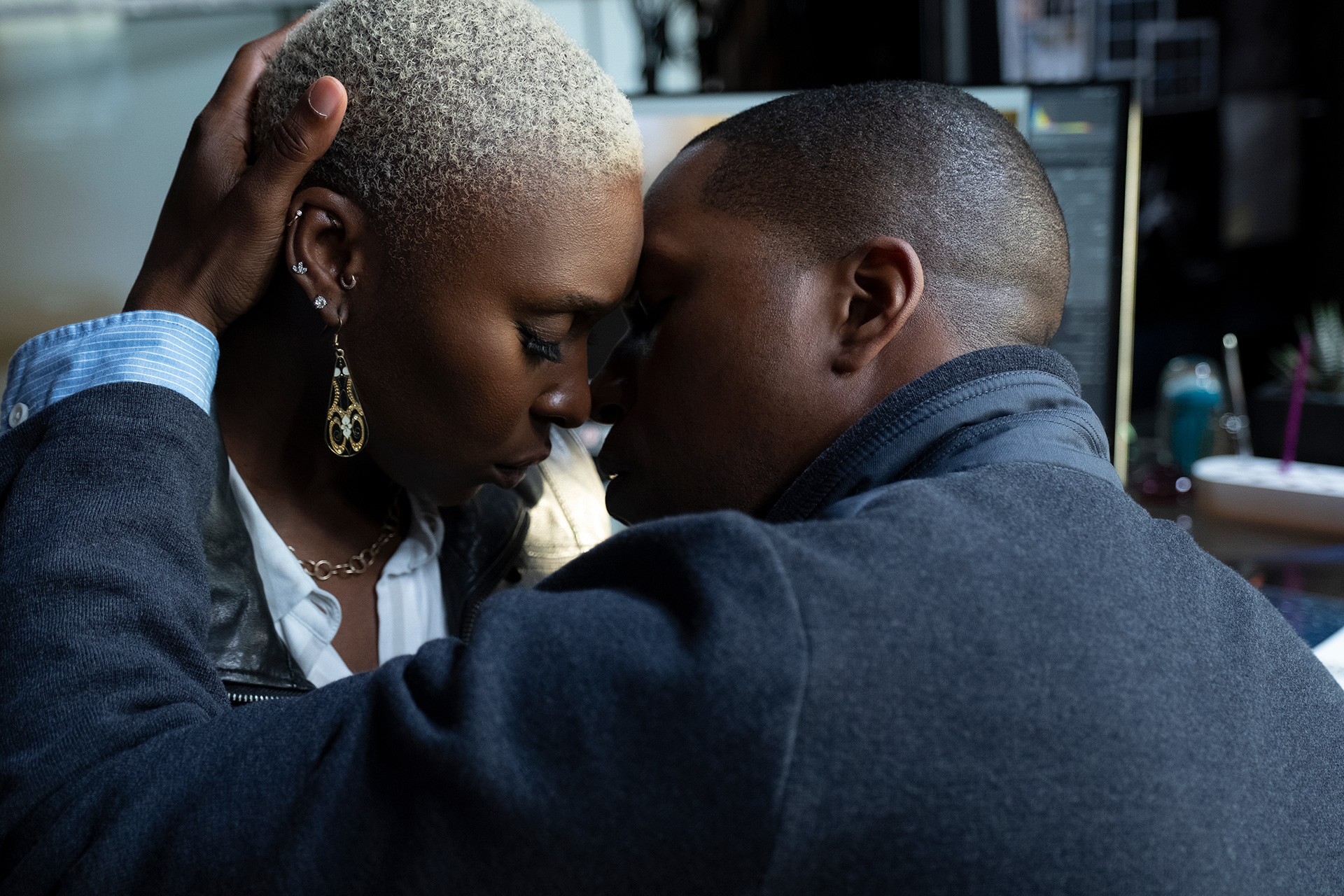 For a movie about a fated love (Leslie Odom Jr.’s Nick and Cynthia Erivo’s Janine) being undermined by a jealous ex (Orlando Bloom’s Tommy), I didn’t expect to witness a scene towards the start where the latter philosophically (and selfishly) attempts to legitimize his sabotage by explaining how every love is, by definition, another’s missed opportunity. He points out a random woman in the bar and tells Nick that whomever she falls for will be the lucky one of millions, setting off a chain reaction that diverts all the other men and women destined to have crossed her path as suitable partners somewhere else instead. The sentiment is intriguing and full of possibilities well outside the scope of what appeared to be a run-of-the-mill, time travel romance.

I don’t think John Ridley’s Needle in a Timestack (adapted from the short story by Robert Silverberg) quite reaches the full potential of its conceit, but it comes close while overcoming any early preconceptions. This tale could have easily devolved into a fight through time, Nick and Tommy creating infinite ripples to alter their pasts and steal Janine without anyone being able to remember after each new present solidified. If it was made closer to when Ridley read it, a Hollywood studio would have surely stripped it down to go in that direction too. With the mid-budget drama back in style, however, weightier issues moving beyond theatrics towards the human condition have earned a green light.

This is crucial: saying Nick and Janine’s love is strong enough to survive every conceivable wrench thrown to shatter the intricate tapestry that was their individual lives colliding with demands the storytelling move beyond petty jealousies and self-righteous claims. To simply let Nick and Tommy devolve into Neanderthals asserting their chauvinistic ownership against Janine’s wishes would only prove none of their love was real, let alone immovable. It would reduce romance into a game and the protagonist into a character who’s no better than the antagonist we’re supposed to want him to defeat. The changes they make cannot therefore hold up to scrutiny and whatever lingers in the background must be bigger than one buried memory of what once was. Our lives are too interconnected for that.

If the question of how Nick and Janine met can remain basic, the answer cannot. Because it’s not about the party Tommy threw wherein his best friend from college (Nick) serendipitously met his wife (Janine). That was the setting, but what it contained was just as much about one relationship’s end as it was another’s beginning. Thus more questions must be asked. Why was Tommy and Janine’s marriage on the rocks to the point where meeting Nick could spark something in her? Did their personalities have an impact? If so, what shaped them? Their careers? Their emotional insecurities? Their loneliness? What about Alex’s (Freida Pinto) guiding hand? Did her post-college absence allow them to stray from happiness? Every choice anyone makes creates an invisible yet profound domino effect.

Ridley embraces the puzzle that this creates. Like Silverberg, he lets the sci-fi aspect of time travel exist without fanfare or exposition to expend effort on how characters use and abuse it. In a nutshell: anyone can pay an exorbitant amount of money to travel to any point in the past as a vacation. It’s illegal to cause a change for personal gain, but enough “phases” (a communal phenomenon caused by “shifts” that reset time with a figurative wave of water leaving everyone to wonder if their lives are no longer what they used to be) occur to prove those rich enough to take “time jaunts” are doing it anyway. Tommy has the means and motive. Nick and Janine have the scars.

I don’t want to say too much since the experience is a huge part of Needle in a Timestack‘s appeal, but perhaps our desire for villains clouds the reality that they’re often as flawed and insecure as us. Think the basis of Cobra Kai and its script flip to show that a different vantage point onto The Karate Kid paints Johnny Lawrence as the victim and Daniel Russo the aggressor. The show’s success arrives from the nuance that goes into digging underneath 80s superficiality to understand how their upbringing shaped their worldview. Add the ramifications of Tommy’s “love hypothesis” from my first paragraph and we realize: if him marrying Janine became hers and Nick’s origin point, what catalyzed hers and Tommy’s union? What if it was unwittingly Nick?

Just as one event was necessary for the next moving forward, the same goes in the opposite direction. One marriage must be erased for the other to be erased. Rather than reside in greed, love’s strength resides in faith since the act of taking only leaves more damage in its wake. The film might begin with Nick and Janine’s bliss, but it’s an illusion. Both fear what Tommy might do to them and thus allow that fear to shut the other out in ways that inevitably turn them into the orchestrators of their own demise. And going back to try and create a win-win providing you want you want and them what you think they want is no different. You must go further back and ultimately risk everything.

Nick wonders aloud: if he didn’t know Janine and just met her now, would he love her? It’s a sweet line but a faulty question. You can’t know. You’re only here because you know her. Remove that familiarity and who knows where either of you are right now? Maybe you shouldn’t love her. Maybe your truth lies elsewhere. You’ll never know unless you strip everything to the studs and do it all over again. It might be a harder journey, but no one said life was easy. Is that a risk you’re willing to take? My knee-jerk reply is a resounding “no.” but I don’t have Nick’s insight into the future through lessons learned. Sci-fi provides an opportunity to look beyond ego and recognize yourself as the problem.

I wish Ridley mined that clarity more, but the third chapter—Needle is shaped as a triptych depicting Nick and Janine, Nick and Alex, and Nick alone—uses it enough to project its impact onto the rest. Odom Jr. is the star and, as such, the complicated central character playing with everyone’s lives regardless of whether he goes back himself. His actions in the present cause crucial change by pushing others to go back instead. That we therefore get to invest in Tommy, Alex, and Nick’s sister’s (Jadyn Wong) as much as him proves important—they aren’t obstacles or competitors. They’re human beings he loves deeply, whose impact on his happiness rivals that of Janine’s. One shouldn’t have to cancel the other.