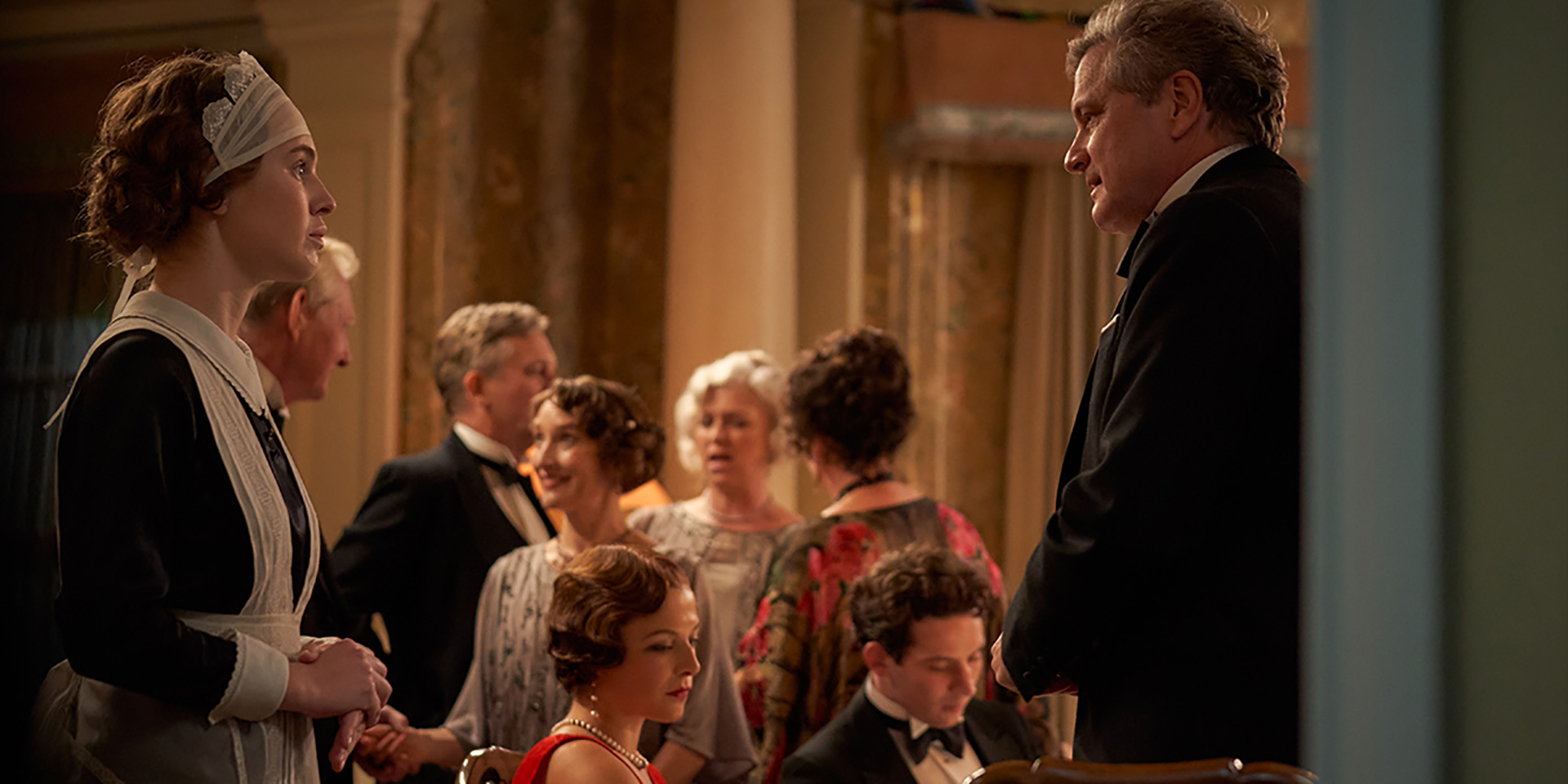 Mother’s Day, 1924: a day for servant girls to ride the train home to their mothers and wealthy mothers to have brunch with their children. Except that a post-WWI England could no longer guarantee such things. Even those who still had the opportunity to forget wouldn’t quite be able to shake the general sense of sorrow permeating the memory of all those sons who died. Marriage announcements hold the bittersweet truths that the groom should have been someone else. Breakfasts carry a quiet air of melancholy for those parents left without any children of whose accomplishments should make up conversation. And those parks and pools once brimming with the joy of boys and girls without a care in the world lay empty as innocence is replaced by grief.

That air of unforgettable loss is present throughout Eva Husson’s remarkably assured Mothering Sunday. It lingers in the sad eyes of Mr. (Colin Firth) and Mrs. Niven (Olivia Colman) as they try to forget what this day means by repeating a mantra about the weather’s beauty and silently screaming through the pain respectively. It’s also behind the smile of Paul Sheringham (Josh O’Connor) upon opening the front door of his estate to the Niven’s orphaned maid Jane Fairchild (Odessa Young). The house is empty for them to be alone together since the staff went home while his parents wait for him at lunch. Does he love her? Or does he love the comfort she provides as a confidant who’s not suffering the same crippling anguish as everyone else?

Adapted by Alice Birch from the novel by Graham Swift, the narrative focuses on this day as a simultaneous flashback and fictionalized account from Jane’s perspective. It becomes the through-line to which we always return despite catching glimpses of the past (Paul, his brothers, and James Niven playing in the field as boys) and the future. The latter takes two forms itself thanks to a brief vignette with an older woman at her typewriter (Glenda Jackson) and a different version of Jane herself working at a bookshop and living with another man (Sope Dirisu’s Donald). Our minds wonder then if what we’re seeing between Paul and her is real or just a story. And if it’s the former, how does one life lead to the other?

The answers come in time as these characters face their depression with stiff upper lips, rage, or tears. We see Jane and Paul together at differing stages of their relationship with him confiding all his secrets to her about the absence of joy and responsibilities of duty. They’re as close as two people can be (even closer than perhaps she and Donald now thanks to a secret kept hidden for mystery). Despite this, the chasm that separates them remains impossible to close. Paul’s an aristocrat about to continue his education in London while Jane’s a servant he cannot even look at while serving dinner without those on his level questioning the reason. It won’t, however, stop them letting the warmth of their embrace provide something real.

That’s all any of us desire, isn’t it? To become lost in a love so deep that it allows unspoken emotions to be heard. Once anyone dares talk about what they’ve communally lost, someone sternly says their name in a way that means, “Shut up.” These families let the pain fester until they can barely exist as human beings anymore. Jane sees it daily with the Nivens as they sleepwalk through their home, avoiding any topic of substance that might accidentally shine a light on the wounds they’ve refused to let close. It’s Paul’s vulnerability that therefore endears him to her—an openness reaching towards a truth he cannot share with anyone else. And while he could never be with her publicly, they’re nothing but equals when together.

Husson leads us through tiny moments building up an origin story of sorts for who Jane will become. These experiences and these observations become the basis of a book about life’s beauty and tragedy binding us in ways that transcend economic and social standing. We see it in action throughout. There’s the daughter of the Nivens’ family friends (Emma D’Arcy’s Emma) losing decorum to speak about her longing with a waiter. We see it in Mr. Niven’s tear-filled eyes as he yearns to hug Jane since he knows he can’t find solace in his wife. And Mrs. Niven is said to have been the happiest of them all, always playing with the children while the adults smoked and talked. Yet here she is a hollowed husk of bereavement.

Firth and Colman are both fantastic in their small roles as a contrast to Jane. The Nivens have lost their children. Jane never had parents. Can they ever acknowledge their emotions on a level beyond reading between lines? No. It’s a shame because they could. Paul’s seemingly good spirits is evidence of what’s possible when you share your feelings with honesty. That Jane gets to be the fly on the wall for the former and the equal partner of the latter supplies her invaluable insight into the human condition that her own inevitable life of loss will only augment. Young is thus tasked with bringing every part of the spectrum to life from her blissful, naked stroll through the Sheringham estate to her own silent suffering.

Jane too is bound by convention and propriety. She cannot reveal her own transgressions by allowing herself to grieve despite feeling it just as powerfully as those around her. And that reality sticks even later when faced with worse. Her outlet is thus the stories she tells. She puts into words what those speechless moments she witnessed in the years after the Great War say. That becomes her gift and curse since doing it well often means experiencing life’s unforgettable horrors first-hand. Rather than pretend it doesn’t affect her, she pours it into her typewriter so the world can understand itself in her characters’ sorrow. It’s what Mothering Sunday accomplishes itself too. It opens a door to the depths of our souls, reminding us we aren’t alone.