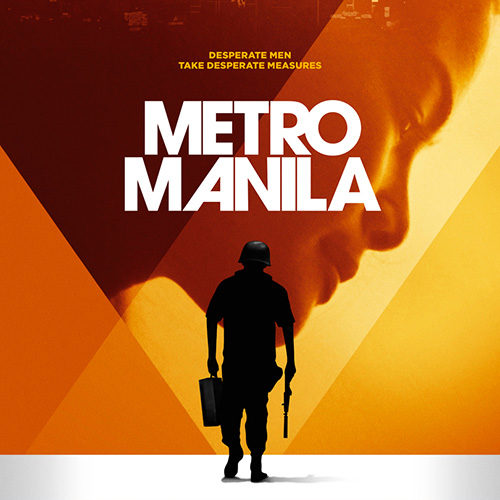 The impetus for Sean Ellis‘ Metro Manila could have simply been an intriguing anecdote to tell people upon returning to England from a trip visiting a friend in the Philippines and for most it would have. Unable to shake the disquieting scene witnessed, however, the writer/director begun crafting a story that gave two nameless armored truck drivers engaged in an argument a history. Enlisting the help of Frank E. Flowers, he used the incident between them as a sort of midway point to expand upon with humanity, suspense, and sacrifice. Maybe those two Filipinos just got word a coworker was robbed and killed; maybe one cheated with the other’s wife. Or maybe it was just like Ellis imagined: a springboard into the dark world of Manila and the lengths some will go to escape it. Shot on location and in Tagalog, Ellis didn’t do himself any favors to make his latest feature a marketable commodity. Undeterred, his hard work and dedication to authenticity has been rewarded with British Independent Film Awards wins, BAFTA nominations, and the Audience Award at Sundance for World Cinema – Dramatic. Each honor is deserved too as the work exceeds expectations in its emotionality and intelligence by never quite going where one expects a crime thriller of its ilk would. He isn’t afraid of the bittersweet or of forcing his characters into a corner before giving them hope and wresting it away once more. The Ramirez family at its center—farmers dreaming the big city will solve their problems—aren’t provided much luck during their transition as a result. Unprepared and innocent, the city salivates at the opportunity to consume their optimism whole.

It’s the same old story: life as a farmer yielding less profit than is necessary to seed the next season. Oscar’s (Jake Macapagal) only option is to collect wife Mai (Althea Vega) and two daughters, board a bus out of the Provence, and pray Manila will be their answer. Like most wide-eyed rural migrators, however, things aren’t so easy. Oscar is conned Day One, he witnesses the sort of underhanded business practices utilized by those seeking migrant work, and shelter only arrives from the slums. A free semi-intact roof is but half the battle when trying to feed four mouths, so sacrifices must be made. Oscar finds a stranger vouching for him to be hired within the city’s most dangerous profession (armored truck drivers) and a neighbor directs Mai to a gentlemen’s bar to help keep them afloat. The film progresses quietly yet at a quick clip, introducing the Ramirez family as one we can relate with courtesy of strong values and ethics. These traits make them easy to trust and easy to fall prey to those seeking to take advantage of newcomers with nowhere else to go. Their morality and decency is inevitably tested as the city whittles away their resolve until little things like a social center dentist giving young Angel (Erin Panlilio) a lollipop after fixing her tooth or Oscar’s grilled chicken sandwich lunch can conjure a smile that looks as though they won the lottery. And for a bit towards the middle it even looks as though things have turned around despite knowing the other shoe must be dropping soon. We delude ourselves into believing it could end happily after all.

Ellis crafts a number of visually effective scenes reminiscent of the stellar artistry wielded on his underrated debut Cashback. The tone is much bleaker, though, showing his evolution as a filmmaker and person to embrace the world’s cynicism with a lens no longer tinted by fun quirk. One such scene crosscuts Oscar and Mai’s first night working—her shy mother of two being selected by a cretin seeking physical arousal and his new buddies guilting him into getting drunk. It’s a tough scene to endure, watching the first steps of a slippery slope ultimately leaving them on the brink of destruction. Others come via flashbacks: the tale of Alfred Santos (JM Rodriguez) that is sprinkled throughout from start to finish and Oscar’s partner Ong (John Arcilla) recounting the harrowing story of the last time he was robbed. Each provides a metaphor for the anguish Oscar and Mai face as well as cautionary tales for us to take at face value despite possessing key details foreshadowing where Ellis plans to take them. Every kindness afforded them comes with a price whether large—Mai’s chastity—or small—Ong’s constant response to Oscar’s “thank yous” being the innocuous “just have my back when we’re in the field”. The suspense is ratcheted up as a result once you realize the film is three-quarters over without any real conflict besides the hardships an impoverished family undertakes while trying to survive. And when the moment comes to clarify exactly what’s been building, Ellis makes sure to throw in a couple wrinkles. Doing so would have birthed heroes in Hollywood, but here on the indie front it creates martyrs instead.

This is what allows Metro Manila to stand out against the pack. Ellis and Flowers thrive at using generic story beats to paint a familiar picture of squalor and the rough and tumble way out, yet they never fall into cliché. The plot suits the characters engaged within, naturally progressing as people of their personas, greed, and lack thereof should. I never felt manipulated or tricked, but instead riveted and along for the ride as Oscar and Mai learn what it means to provide for their family. In the end, the big city proves helpful to even the most downtrodden if they’re willing to pay the price. Sometimes that cost is flesh or emotional sanity, other times humanity itself. And the only way to ensure it’s worth the pain is to take control, consequences be damned.