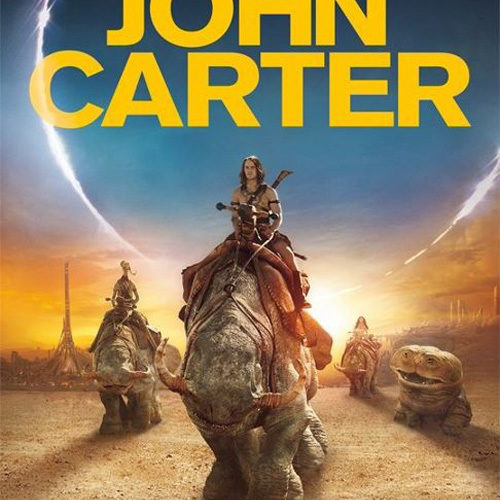 There is a whole lot going on in filmmaker Andrew Stanton‘s live-action feature debut John Carter, a very big budget adaptation of Edgar Rice Burroughs‘ tale A Princess of Mars. It can easily be argued, too much is going on. But all the little problems peppered throughout this operatic space epic are more than made up for by the big themes being explored from the first frame to the last. Opening with a quickly-cut, kinetic battle sequence on a distant land, we watch a man named Sab Than (Dominic West) receive the gift of absolute power in the form of blue light from another, smarter being, played by the enigmatic Mark Strong. Cut to New York City, 1881, in which a young Edgar Rice Burroughs (Daryl Sabara) is told his uncle is dead and that he has received all of the fortunes of the late adventurer, including his journal. As the young man reads the journal’s contents, so begins the tale of Captain John Carter (Taylor Kitsch), the Civil War cavalryman who is transported to Barsoom (a.k.a. Mars) in a blink. Once on the Red Planet, Carter must deal with the lack of gravity present, resulting in a very funny, silly sequence in which the soldier flops around this new, beautiful desert landscape like a feather. Seconds later, he’s discovered by the Tharks, most especially Tars Tarkas (Willem Dafoe), one of the only diplomatic minds of his Spartan-like species. From there we get a princess named Dejah (the lovely Lynn Collins) and the tough choice she faces: she must marry Sab Than in order to save Helium, her home city. Enter Mr. Carter, the potential, but scarred, savior of Barsoom.

This world of Barsoom is rich and fully realized, from the deserts to the last remaining metropolis. Stanton has been developing it for years, and it shows. Descriptions from Burroughs’ tale are lifted directly from the text. This Helium, the democratic Barsoom city on the brink of destruction, is the one we have imagined, from it’s arc-infused architecture to its cathedral ceilings. The same can be said for our titular princess. Collins has been acting for some time now, sparkling in small indies here and there but never making many waves. Here, as Dejah Thoris, she shines in a way that should make all other actresses envious. Her princess is dynamic in a way few are, intellectual and tough and obedient. Not unlike the rest of Stanton’s film, Collins’ Dejah is complicated, stuck between what she must do and what she knows is right. It’s a common internal conflict navigated beautifully by Collins, who’s both old enough to seem weathered and young enough to play a jilted daughter. Truly, though the film be titled John Carter, it seems even Stanton is aware that this princess of Mars is the character who anchors the story. To that point, leading man Kitsch never quite hits as Carter. Living somewhere between miscast and underwritten, the young actor does his very best to play beaten warrior even as his young looks and pretty eyes fight against him. Furthermore, Stanton’s wayward decision, along with fellow screenwriters Mark Andrews and Michael Chabon, to infuse their hero with a tortured past proves another obstacle for Kitsch to hurdle over, and he only partly succeeds. There’s a moment, early on, during perhaps the most spectacular sequence in the film – in which Carter uses his gravity-defying Earth weight to rescue Dejah mid-air while fending off Sab Than’s henchmen with his chains – where the soldier meets the beautiful princess and the two exchange quips, both with a twinkle in their eye. The couple’s chemistry is sown in front of our eyes, only to be criminally ignored throughout the second half of the film.

And so we are brought back to the gift and curse of the multiple plot lines at play here. This is a vast narrative full of political conflict (the three sparing idioms Militaristic, Democratic and Autocratic), religious conflict (the film begging the common and always difficult question, how much are you willing to believe?) and romantic conflict, with not enough room for all three. But by God if Stanton and his cronies don’t try to get it all out.

And while these themes run a little thin through the 130 minute running time, all three come to a head quite eloquently in one particular scene in which Strong’s Matai Shang explains his greater motivations, or lack thereof. As the shape-shifting Shang guides Carter up and up the city of Helium to what is to be his death, one recalls that great carousel scene in the Carol Reed noir classic The Third Man. Even on Mars, men and beast alike fight for kings that will be forgotten in time.  Following his Finding Nemo and Wall-E, Stanton continues his trend of making entertainment for all ages with messages no child can fully understand, but which most adults understand all too well.

Unfortunately, Stanton’s epic appears destined for a quick, mismanaged, misunderstood death, much like the Barsoom it has created. Not to worry, in another time this flawed, impressive work will be admired and appreciated.