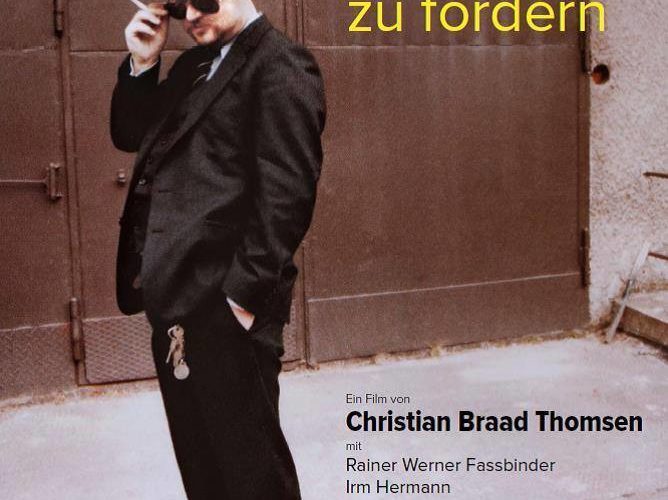 [Review] Fassbinder: To Love Without Demands

When observing its material from something of a remove, it could easily be argued that Fassbinder: To Love Without Demands is a bit drier than its amazing subject deserves. While I don’t wish to spend too much time in a review of someone else’s documentary extolling the virtues of Rainer Werner Fassbinder’s massive, emotionally bruising filmography, it’s worth noting the division between those films, many of which are seen herein via clip form, and Christian Braad Thomsen’s document, the film at hand. Being that this is subtitled as his “Personal Recollections,” it’s only natural for the picture to favor his and others’ direct experiences with Fassbinder over anything else; even the most prominent interview with the eponymous figure is Thomsen’s own work. We get this in the “info-dump” style, the sort of documentary filmmaking one might be able to immediately picture: talking-head interviews; archival photos; film clips; and voiceovers from involved parties, living or deceased.

Taken as a whole, however, these parts aren’t much cause for concern. If that dryness is rarely superseded, Fassbinder: To Love Without Demands nevertheless offers enough fine material and organizes them with enough intelligence to create a many-pieced psychological portraiture of one of the most intriguing filmmakers who’s ever lived. Thomsen, taking proper advantage of personal interactions and close connections — an archival, never-before-seen discussion between documentarian and subject, current-day interviews with collaborators such as Harry Baer and Irm Hermann (the latter also a former lover) are prominent — has done the homework to bring a larger thesis into perspective. How much one agrees with or even finds it persuasive is another matter.

To Love Without Demands often resembles its documentary-about-a-great-figure brethren in playing as an attempt to filter Fassbinder’s philosophies, strategies, lifestyle, and provided comments through the perspective of those who knew him best — an opportunity for outsiders to peek in. These do not so much dispel a myth as they mostly to comment upon the man these people knew — noted particulars of his behavior (five movies produced in five months! no sleep!) do nothing if not heighten the sense of amazement — and permit an audience their perspective.

There are many to choose from: seen in tandem with the customary film clips and interviews, other materials (e.g. behind-the-scenes footage) might only create new questions about the why and how of Fassbinder’s process. Allowing them an individual place, whether they’ll be supported or contradicted by surrounding material, is perhaps Thomsen’s wisest artistic choice, and judging by how frequently provided interviews allow Fassbinder to “respond” to a statement — even (or perhaps especially) if the connections aren’t precisely underlined — the fact that this subject has been dead for nearly 34 years isn’t much of an impediment.

It’s in presenting a thesis about Fassbinder’s obsession with the Oedipus complex, or perhaps his own succumbing to this very thing, when Thomsen wades through muddier waters. The level of psychological analyzing at play is pervasive enough to warrant some questioning — even the chapter-by-chapter structural choice, complete with Fassbinder quotes, creates some sense of digging deeper — yet they have a strange way of rarely latching onto much else that’s in the movie, or at least didn’t play to my own interests enough to leave much impression. This is a failing, but it’s not so much from crackpot theorizing as it is some structural wonkiness. The pointed juxtaposition of a quote, an image of the artist as a young man, and a clip from the rarely discussed I Only Want You to Love Me is stimulating in the moment; ultimately, it’s the more direct anecdotes (e.g. stories of his resistance to tranquilizer-level sleeping pills) that I remember and think fondly upon.

The lack of a forceful artistic voice in Thomsen’s picture is likely what’s to blame for that lack of cohesion, or so I’m inclined to think whenever remembering the many instances in which it proceeds at the speed of its elderly participants’ thoughts and words more than the fervor with which its subject created unforgettable art. But their insights are what make To Love Without Demands a document of some note. It’s one thing to learn Rainer Werner Fassbinder had a strong hold over his participants and another entirely to hear Irm Hermann declare, “I was his possession.” Whenever it earns those words and creates a vision of their many possible meanings, this film can hardly be said to do the man wrong.

Fassbinder: To Love Without Demands will begin a theatrical run at New York City’s Metrograph on Friday, April 29.