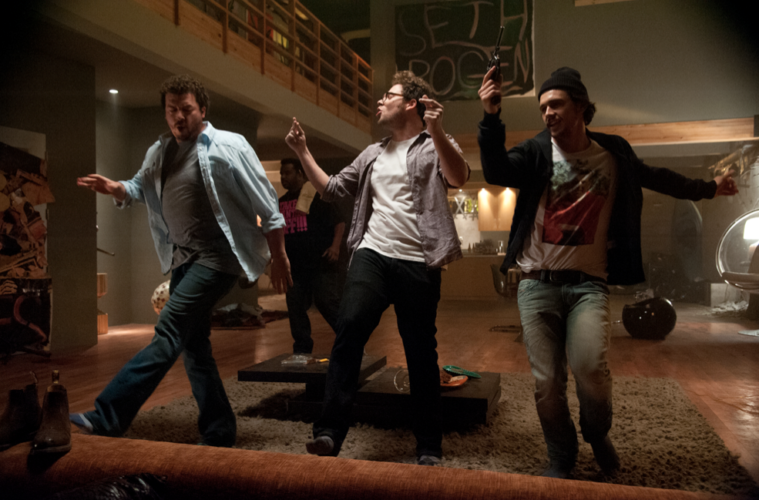 Hollywood’s Eschatology Obsession: Why We Laugh as the World Crumbles Apocalypse. Armageddon. The Rapture. No matter what the name, it all means the same thing: the end of the world and life as we know it. Mankind’s fascination with its own destruction has frequently manifested itself through cinema, and never before has this morbid preoccupation been more apparent. Along with the ensemble comedy This Is the End, there’s Paul Middleditch’s recently released Book of Revelation spoof Rapture-Palooza and the darkly funny indie It’s a Disaster. Besides the obvious, another trait these titles share is depicting the event as it happens, a fairly new phenomenon that differs from the many, many pre- and post-apocalyptic stories in every genre from horror to romance. That they all appeared at the same time warrants some examination into how this new crop of films fit into this strange category.

Throughout history, movies have used various methods, be they man-made, natural or spiritual, to destroy the world, and each feature addressed a new concern. During the atomic age, fears of nuclear annihilation came to a head in films such as the 1961 UK production The Day the Earth Caught Fire, in which simultaneous bomb detonations knock the planet out of its orbit and send it hurtling toward the Sun; despite the dramatic description, the selection is a slow, agonizing death crawl toward an ambiguous ending.

In Michael Tolkin’s understated 1991 drama The Rapture, Christian ideas are challenged when God unleashes Judgement Day on the world, leaving one woman to wander a barren purgatory after she renounces her faith. In the last decade or so, the advent of CGI made it possible to produce realistic large-scale chaos once thought impossible, and no one utilized the technology better than Roland “The Master of Disaster” Emmerich. In 2004, he played on the anxieties about global warming and climate change with the big budget action adventure The Day After Tomorrow, wherein massive international storms cause problems for a small group of survivors. As the new millennium progressed, both mainstream and independent films honed in on society’s obsession with the doomsday supposedly predicted by the ancient Mayan calendar. As the end date of December 21, 2012 drew near, screenwriters and directors clamored to release their own creative imaginings of the impending apocalypse. Director Alex Proyas went with scorching solar flares for Knowing, a 2009 mystery starring Nicolas Cage as a professor out to prevent the ultimate catastrophe (spoiler alert: he doesn’t).

One inevitability in cinema, however, is that with each movement comes parody, and as humanity’s expiration date came and went without so much as a whimper, apocalypse movies became a prime target for mockery. Just as Edgar Wright‘s Shaun of the Dead and Ruben Fleischer‘s Zombieland poked fun at zombie film tropes, the humor in This Is The End, Rapture-Palooza, and It’s A Disaster make light of its subject and provide a cathartic release from the false prophecies portrayed in overblown fashion by Emmerich and others (something the aforementioned Wright is likely to do in his upcoming The World’s End).While audiences originally turned to these films as a way to collectively understand their fragile, mortal existence, they now look to them for a sigh of relief as life goes on and they are again allowed to laugh in the face of death.

What are your thoughts on this ongoing trend of apocalyptic comedy films?