SXSW Review: The Unbearable Weight of Massive Talent is as Curious a Creation as Cage Himself 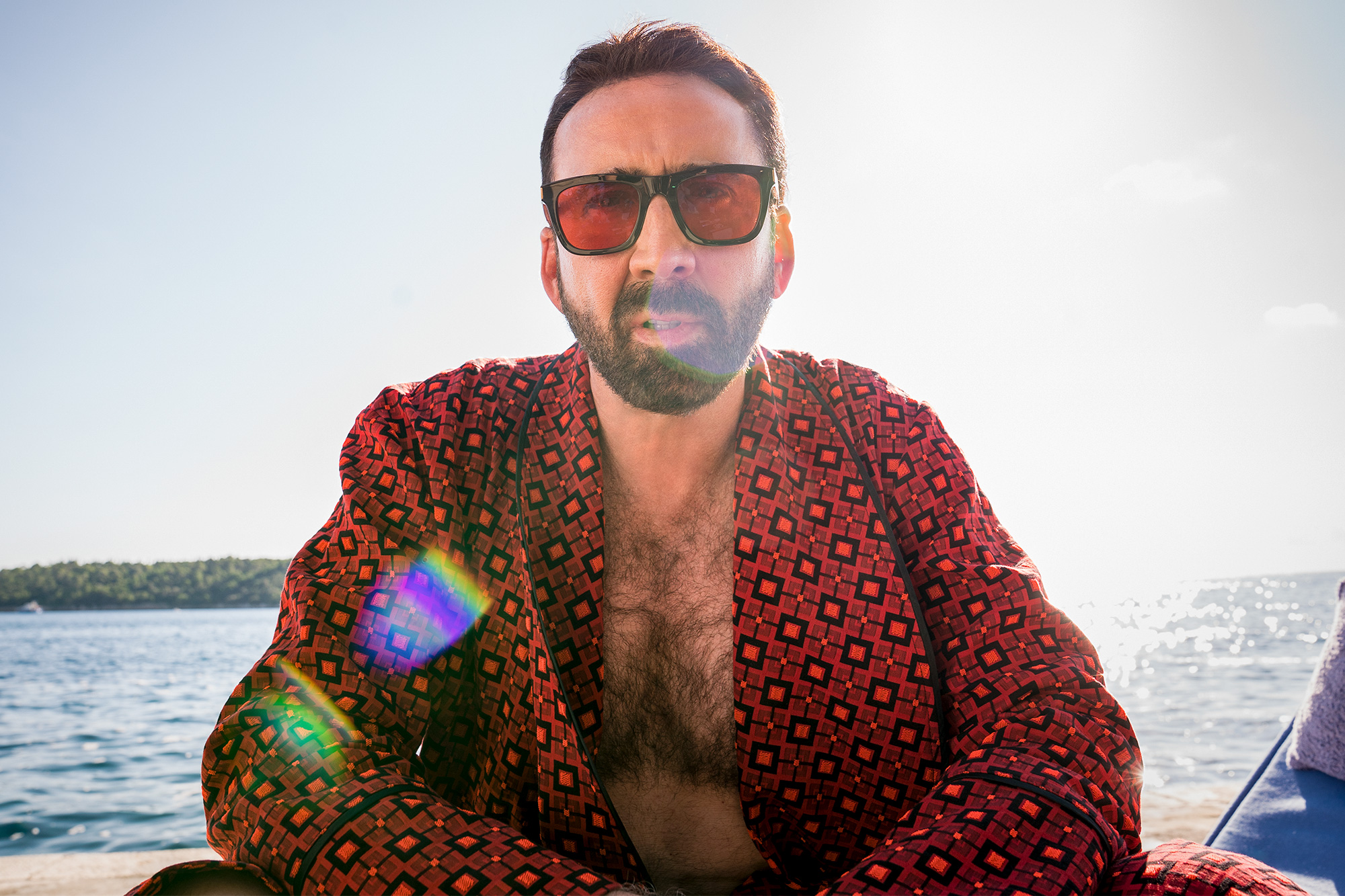 As unhinged as its muse, The Unbearable Weight of Massive Talent is a curious bit of fan service and perhaps a welcome evolution in the career of Nicolas Cage, who has been one of the more active leading men of late—an output that in some years stretches to six feature titles, some of which he’s served as a producer for. This film posits the theory that our man is broke, down on his luck, and in need of a comeback. Guided (or haunted) by Nicky––the clean-shaven younger version of himself that serves as the beast within––he finds himself seeking one massive hit to survive. He’s in troubled waters, divorcing wife Sally (Sharon Horgan), unable to relate to daughter Addy (Lily Sheen), and deep in debt from a lavish lifestyle. After a potential dream project that he pitches in grand Cagian fashion passes, his agent Richard Fink (Neil Patrick Harris) brings him a lucrative, can’t-pass-up offer to hang out with a wealthy fan in Mallorca Spain for a million dollars.

Upon landing he’s tailed by CIA operatives Vivian (Tiffany Haddish) and Ray (Ike Barinholtz) that convince him his fan, Javi Gutierrez (Pedro Pascal), is an internationally wanted kingpin that needs to be taken down. Cage plays along, heading to Javi’s dream estate for a weekend of fun and games (with the ground rules that nothing sexual happens). Javi isn’t just the ultimate Nic Cage fan and rabid modern cinephile who ranks Face/Off, Paddington 2, and The Cabinet of Dr. Caligari as his all-time favorite films, but is also someone who became closer to his dying father thanks to the power of Cage in Guarding Tess.

Plot and ancillary characters beyond Pascal’s Javi are essentially one-dimensional window dressing, Talent taking the shape of the buddy comedy aspiring screenwriter Javi attempts to write for his idol. It’s a shame the film doesn’t properly utilize its other massive talents––namely Haddish and Barinholtz––as director Tom Gormican is focused on the one and only Cage.

Cage is a curious performer who, as most recently evident in last summer’s Pig, can simply melt into a role with great restraint or unleash his inner tiger, such as when working with fellow madman Werner Herzog in Bad Lieutenant: Port of Call New Orleans. There is no one true Nic Cage, the curious rebel child of Hollywood’s royal family the Coppolas, and the film has a good deal of fun allowing its leading man to go just as far over the top as he wants. It is a shame that plot gets in the way.

Written by Gormican and Kevin Etten, it thankfully doesn’t feel like a 90-minute SNL skit but does become somewhat bogged down in details of Javi’s family rivalries, allowing Cage to flex his action muscles as he muses over his next steps as a performer. While his Academy Award-winning performance in Leaving Las Vegas exists in this world, much of his later output, including several straight-to-VOD titles, does not.

Despite minor quibbles over world-building, Cage fans in the right headspace may go as wild for it as its premiere audience at SXSW. The film itself is extreme fan service––so much so the rest of the ensemble is largely in service to the man himself––but often this meta-comedy knows exactly what it’s doing. Like Cage, it’s a curious creation, one that never quite matches the ambitions of the man of the hour, but does allow him to poke fun at himself and treat fans to something cathartically silly. From a cynical perspective, you can’t quite call it a comeback (he never left or has taken an extended break) or reinvention, but more of a slight brand refresh.

The Unbearable Weight of Massive Talent premiered at SXSW 2022 and opens on April 22.