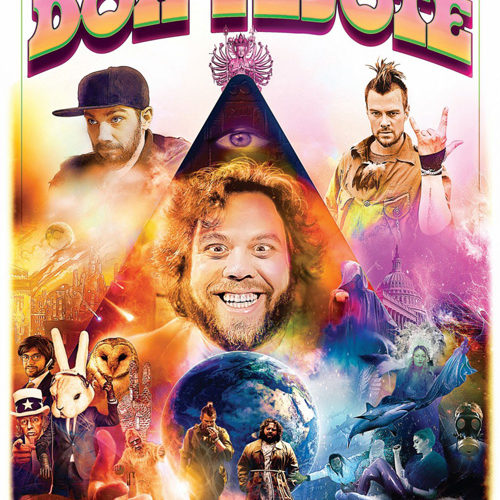 No one can say I didn’t do my due diligence, but I simply can’t wrap my head around Dan Fogler and Michael Canzoniero‘s stoner-tinted, loose modernization of Don Quixote aptly entitled Don Peyote. People often joke about certain cult films “working better” while high and I can’t help thinking this might actually be the optimal state to truly understand Warren Allman’s (Fogler) spiritual journey. I should know, as I viewed it twice in the hopes that fatigue rendered me impossibly perplexed after the first screening, rather than discovering I just really didn’t care. I’m sure there’s an audience ready and willing to eat up this drug-fueled Waking Life of hallucination and conspiracy, but I’m not one of them. Warren is the hidalgo, friend Balance (Yang Miller) his Sancho Panza. Run-of-the-mill stoners at the beginning, a chance encounter with a wet doomsday bum (Nicholas De Cegli) pushes them onto a path of righteous purpose. Well, it ignites Warren’s creative juices at least to put his impending nuptials to Karen (Kelly Hutchinson) and fledgling graphic novel career on the back burner in lieu of interviewing out-there characters waxing poetically about the end of the world. Balance kind of just tags along, entering and exiting the stirred soup of reality/nightmare/fantasy at will. Most of these interviewees appear real—Daniel Pinchbeck, Freeman, and a slew of 2012/Quetzalcoatl aficionados and spiritualists—with some bystanders getting the blurred face treatment. I wonder if this project started as a legitimate documentary before transforming into the birth of our newest prophet for peace.

Opened by a brief title card explaining the concept of the hundredth monkey effect: a phenomenon stating that once a certain number of a species learns something like Japanese macaque monkeys washing sweet potatoes, it becomes intrinsic to all as though the instinct simply spread across the water onto the nearby islands for all to know. It’s a wild idea from the 70s that has since had studies written discrediting it as unsubstantiated nonsense. Fogler and company seem otherwise firmly in the camp of believers as the film contains many instances where Warren is suspended in water as goddesses float around him and heady ideas—with help from marijuana, peyote, and ayahuasca—permeate his consciousness through osmosis. All those antiquated notions of adulthood like marriage, kids, jobs, and retirement slip away in search of Homo Sanctus clarity. Are you with me? No? That’s okay because even though I saw it, thought it, and wrote it down, I still can’t grasp what Fogler and Canzoniero are accomplishing. It’s something, though, and I give them a heap of credit for attempting such a new age rite of passage when they could have spent their time on a movie with wider reach than indie distributers XLrator can provide. Heck, his agent (a fictionalized representation named Galvin Culpepper played by Topher Grace) interrupts the proceedings twice to corroborate how conscious a decision it was to forsake a payday for this passion project. Fourth wall breaking abounds as the story progresses with a cameo by Anne Hathaway as “truth” permeating into Warren’s dream due to the DJs on his radio discussing her celebrity. Could this existential crisis therefore be autobiographical?

Where Don Peyote gets truly intriguing is when its transitions from mundane normalcy to a higher existence find their delineations gradually dissolving until we cannot tell which is which. Characters like John the Baptist (Joe Coleman) pique our interest while telepaths declare Warren mankind’s savior despite his going certifiably insane. A contemporary Adam (Josh Duhamel) and Eve (Elisabeth Harnois) arrive to open our third eye as cameos by Timothy Levitch, Abel Ferrara, Dean Winters, Wallace Shawn, and a non-English speaking Annabella Sciorra enter to confuse and enlighten us and Warren simultaneously. It’s a literal circus of insanity that’s trying to ensure we can never gain sure footing; almost daring us to take an equivalent amount of substances as its hero to “see” the truth about shadow governments and the Illuminati playing us like puppets. And all the while we have Fogler doing what he does best—slack-jawed confusion, manic explosions of laughter, and an everyman’s quick wit to endear him to us as a vessel explaining that which we overlook on a daily basis. He breaks into lip-synched song, acts like a hyena, and at times appears genuinely frightened about the rabbit hole his Warren has fallen into thanks to curiosity and pharmaceuticals. This is the flower power of the 60s as manifested in the aughts by middle class citizens trying to escape boredom until finally jumping off the cliff into a brand new life of endless possibility. The old adage says you must lose everything before you can be free to rebuild yourself into the creature you want to become above social constraints and behavior. Sacrifices are made, violence endured.

Is a stoner comedy necessarily the most effective way to convey such philosophical treaties? Probably not. But who says Fogler and Canzoniero are trying to educate the world? Can’t they target fans and those of this lifestyle knowing they’re the most willing to accept the metaphysical theorems provided? Don Peyote as a result proves something special even if only for a select group of moviegoers far from the mainstream or even the close fringes. I can appreciate that even if I didn’t personally enjoy the film due to sobriety or not being as open-minded as I think. Some simply relate to Jay Baruchel‘s drug dealing Bates comparing life to the disintegrating joint in his hands as metaphor for America’s divide between rich and poor. They’re the ones willing to put two fingers in the air and shout Don Peyote’s name in reverie.

Don Peyote is currently on VOD and will hit select theaters Friday, May 16th.