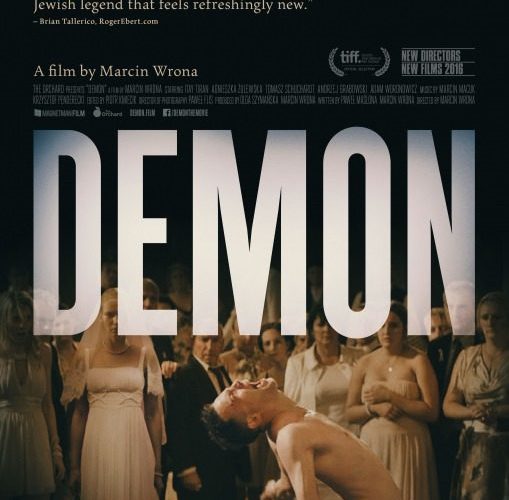 Nothing’s allowed to derail the guests of a Polish wedding from having fun, not even the groom’s epileptic seizure. You just pick him up and cart him out. Send the ambulance away so it won’t scare the crowd, pump him full of meds to even him out, and simply bring out more vodka to spike the punch and confuse everyone’s equilibrium when the revelers start spreading rumors that he’s been possessed by a Jewish demon. We aren’t celebrating the union of man and wife after all, this is an excuse to go wild and revere the bride’s father as an unforgettable host. So what if those rumors are true and there’s at least one set of skeletal remains beneath our feet. We can worry about all that tomorrow.

This is Marcin Wrona‘s final film Demon in a nutshell: a tale of destiny, the supernatural, and undying love. It’s about a young couple that met abroad in England and her homecoming back to Poland doubling as a familial introduction to the man she loves. Zaneta’s (Agnieszka Zulewska) father (Andrzej Grabowski) isn’t quite sure about the whirlwind romance, but he’ll do anything for his daughter’s happiness even if it means accepting Piotr (Itay Tiran) in his arms before he’d like. He gives them his grandfather’s old land, Zaneta’s love for its aged barn full of memories too large to ignore. The grounds need work and the house is hardly livable, but Piotr is an architect/contractor/engineer (we’re never really told which) and more than capable to fix things up. He may not have the chance, though, after accidentally backing into a tree with a construction digger to unearth human remains. Piotr initially does the right thing by calling Zaneta, but when his fiancé doesn’t answer the reality of his soon-to-be father-in-law’s strict itinerary comes into focus. So he reburies the bones and plans to tell everyone what he found after the next day’s ceremony in order to keep an already tenuous situation afloat. But it’s too late as voices in the night call him to the field, a pool of mud consuming him under. How Zaneta’s brother Jasny (Tomasz Schuchardt) and the mysterious Ronaldo (Tomasz Zietek) find him asleep in his car without a speck of dirt on his clothes is a morning miracle. We know different.

Something’s obviously not right as Piotr’s temper rises so those who know him—namely Zaneta and Jasny considering it was his friendship that introduced the two—wonder what’s wrong. Drunken behavior leads to hallucinations as the groom begins seeing a ghost in Hana (Maria Debska) all in white. Rather than fear him, however, this party already swimming in alcohol merely seeks to silence him. They don’t even dismiss the idea he might be possessed as much as hope to table it for tomorrow. What was all about Piotr’s descent into a personal Hell not his own becomes a look at those surrounding him and how quickly they turn. Zaneta’s father berates Jasny with blame and demands an annulment. The Catholic priest (Cezary Kosinski) just wants to go home. Billed as a comedy horror, the former genre proves much subtler than that description usually presumes. The horror part is serious, Piotr’s unraveling just as terrifying for him and his new wife as it would in a movie without any darkened laughter. The comedy is therefore situational whether with a doctor (Adam Woronowicz) feigning sobriety despite a bottle constantly in his hands or the bandleader closing up shop early to screw a bridesmaid. Its humor arrives via Zaneta’s family’s selfishness towards Piotr and their quick dismissal of him as a crazed junkie. It’s funny because they’d rather pretend nothing is happening despite knowing the truth. An elderly professor (Wlodzimierz Press) laments the past, their doctor wonders why he wasn’t possessed, and Zaneta is left crying alone.

But while we smile at Ronaldo, Jasny, and his father running around like chickens sans heads, there’s still the drama of what sparks that reaction to provide intrigue. Who is Hana and why is she here? Why make Piotr her vessel? And how important is the screaming woman from the beginning, distraught at the death of her husband, to this whole endeavor? Is she merely a premonition for the nightmarish revelations of death to come? We see the look from her eyes in Zaneta’s by the end; her forgotten bride desperate to rescue her love from whatever is happening while her family seeks to ignore him. This dybbuk is quite literally clinging on and it’s not difficult to wonder if others know more about it than let on. It’s impossible not to be drawn into the mystery with so many willing to sweep everything under the rug to save face with a room of drunken guests. We bend closer to pick out details Wrona has expertly woven in with the camera purposefully positioned—sometimes on the leads and others on those for whom a light bulb of clarity has went off. I vividly recall the professor seen crisply in the background before Piotr acts weirdly and who knows how many times Hana is noticed in the distance. The professor’s empathy, priest’s ambivalence, and doctor’s compromised focus all create a comedy of errors similar to Death at a Funeral with the tense atmosphere of the unknown calling to mind The Shining for reasons both general and specific.

Love is in the air throughout, but whose trumps the rest remains uncertain even as the credits roll. Death happens to everyone—sometimes without explanation—and spirits refuse to leave until their suffering is made right. Maybe Zaneta didn’t choose Piotr at all; maybe Hana called him by using Jasny’s friendship as a fateful ignition point for a journey beyond anyone’s control. And if her spirit was waiting to be released, who knows how many others lay buried and forgotten like the shops that the professor mourns along the street where he grew up. Demon becomes a siren to never forget the past or the many bodies left on battlefields of horrific wars. No matter how civilized or at peace we are now, history will always haunt us.