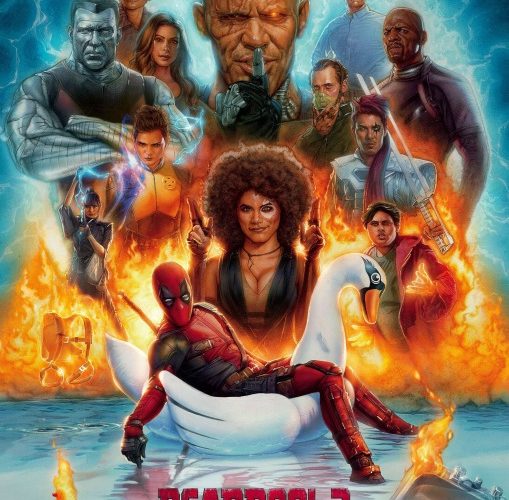 The biggest critical gripe coming out of the first Deadpool was that its attempts to subvert the superhero genre were squandered by being a superhero film. What does that mean? It literally is a superhero film. The character is an X-Men alum who exists to fight bad and good guys alike, and so the plot was always going to follow a familiar arc towards finding redemption and / or revenge against those foes / friends. Where it diverted from the formula was its embracement of R-rated language, blood, gore, sex, and other subject matter. It broke the fourth wall to mock its conventions while wielding them — a truth that I’d argue only makes it work better by becoming self-aware rather than self-important. And it proved heroes aren’t all clean-cut boy scouts.

So it’s surprising that many critics who disliked the original are singing Deadpool 2‘s praises since the sequel is ten times more derivative and trope-y. David Leitch’s film fridges a main character early for tired motivation, introduces a new character from nowhere with an abrupt cut, utilizes an eye-roll-inducing mirroring device that somehow isn’t called out by a biting quip from star Wade Wilson (Ryan Reynolds), and shows that the only thing lazier than lazy writing is joking about how lazy it is to justify said laziness. The main plot from Rhett Reese, Paul Wernick, and Reynolds is completely by-the-numbers, with a trio of “villains” that may or may not pose a legitimate threat beyond motive if they can even stay evil enough to do damage.

But it still works. Maybe not as well, since the element of shock and awe can’t be put back into its bottle, but anyone who enjoyed Wilson’s transformation into a bullet-hole-riddled leotard that can’t shut up should have as much fun. And while I might be stumped as far as the reasons why those who didn’t found this change of heart, I’m glad because we all need a nice absurd break from the doom-and-gloom melodrama the MCU, X-Men franchise, and DC universe each deliver in their own unique ways. We should be able to rejoice in the fact that someone within his own fiction can honestly speak about everything wrong with the genre without worrying about sycophantic fanboy trolls threatening to dox him for dissention.

Deadpool is given free reign in this respect as he lambasts everything — whether himself (Reynolds), Josh Brolin’s filmography, or the sheer idea of franchise filmmaking. Were anyone else doing the smack talk, it might eventually wear out its welcome, but Reynolds’ recent renaissance shows he’s Energizer Bunny-levels of can’t-quit, his one-liners crucial to the whole when there isn’t much going on despite so much going on. Wade must save a young mutant outcast (Julian Dennison’s Russell), Cable (Brolin) travels to the past (the film’s present) to save his family, and a ragtag bunch of X-Men rejects join forces for some effective physical comedy. They each converge, implode, and feign importance while actually just preventing the focal point’s simple trajectory from being simple.

The through-line is one that’s centered on family and its strength regardless of blood relations. This is why characters act out of rage ignited by death and torture and why their communal pain may open their eyes to what their actions truly mean outside of the satisfaction our minds believe vengeance will supply. We don’t receive anything new in these terms, and, as such, discover the plot to be boring in its linear progression towards one plausible end: the “getting caught up” flashback device here catches us up in about ten minutes rather than two-thirds of the runtime, like part one. But everything Deadpool 2 lacks in mystery is quickly overshadowed by what it possesses in ludicrous humor. No set-up is too elaborate for an honest WTF laugh.

And there are many, thanks to those aforementioned X-Force newcomers: Bill Skarsgård’s Zeitgeist, Terry Crews’ Bedlam, Lewis Tan’s Shatterstar, Rob Delaney’s Peter, and a surprise cameo that will probably be ruined any day now as Vanisher. They add comic relief to a section of the film where our usual comic relief doesn’t tread; Karan Soni’s Dopinder and Leslie Uggams’ Blind Al are fun in reduced roles while T.J. Miller’s Weasel is so one-note that we’ll barely realize his absence in part three due to transphobic comments and a fake 9-11 call in real life. The franchise’s true new star, however, is Zazie Beetz’s Domino, thanks to a charismatic performance and a superpower (luck) with the same room for unforgettable visual panache as Quicksilver in the current X-Men timeline.

Her sense of humor provides the perfect foil to Reynolds, much like Morena Baccarin’s Vanessa. The difference is that she can follow Deadpool into battle and kick ass courtesy of John Wick maestro Leitch’s kinetic style. She adds the necessary layer of snark to counter Negasonic Teenage Warhead’s (Brianna Hildebrand) indifference, Colossus’ (Stefan Kapicic) overbearing nagging, and Cable’s humorless mug. The latter is a great straight man in a fight, but a full movie of him giving Wade the evil eye after every quip would have turned old fast. Add Dennison’s Russell — pretty much Ricky Baker from Hunt for the Wilderpeople if Bella and Hec didn’t adopt — for an authentic bit of complexity that shines through the nonsense, and there’s just enough drama to sink our teeth into.

The action has definitely been ratcheted up, thanks to Leitch’s involvement, with finely tuned chase scenes, fight scenes, and surprise characters wreaking CGI havoc. Sadly, you can’t appreciate that aspect without remembering stunt driver Joi Harris’ tragic death, but it appears they at least didn’t include footage in the final cut. This reality does undercut the “family” theme, though — especially if it could have been avoided without losing a step. We can only hope Reynolds (as star, co-writer, and producer) takes it to heart to ensure better safety standards moving forward. Because I would like more of this franchise, and perhaps even a bleep-filled Avengers cameo once Disney buys Fox. Its irreverence is exactly what’s needed to combat our mounting superhero fatigue.

Deadpool 2 opens wide on Friday, May 18.