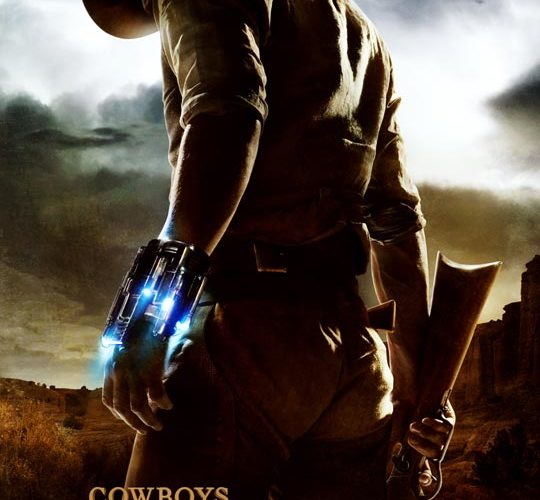 It is telling that there are five credited screenwriters on Jon Favreau‘s latest blockbuster, Cowboys & Aliens. Based on Scott Mitchell Rosenberg‘s comic-book Roberto Orci, Alex Kurtzman, Damon Lindelof, Mark Fergus and Hawk Ostby all share script credit for the film. By the last act, the entire thing feels crafted from a “science-fiction for dummies” book. That said, before it all falls apart, the populist Iron Man director attempts to create an authentic western tone and almost nails it.

Daniel Craig plays Jake Lonergan, a cowboy who wakes up in 1875 New Mexico with no recollection of his past. As he enters the town of Absolution he encounters the town bully played by Paul Dano, whose dad is Colonel Dolarhyde (Harrison Ford). The two get in some trouble and are sent to a bigger prison in Sante Fe. That is, until the aliens come and attack. For such a geek-friendly premise, it is disappointing that one almost wishes the sci-fi aspect wasn’t present. There’s nothing to hate here (although I did get The Last Airbender nightmares when I spotted Noah Ringer), but the story never reaches anything out of your imagination. Isn’t that what great sci-fi is meant to do? Surprise, excite, expand beyond what you could have ever possibly conceived? While the creature-designs are frightening, what Favreau actually has them do we’ve seen time and time again, right down to the last beat.

The other side of the coin, the western backbone, is delivered convincingly enough. For the first 30 minutes, Favreau doesn’t feel the need to rush through things and does a decent job of imitating the greats that came before him, especially Craig channeling Clint Eastwood‘s The Man With No Name. Cinematographer Matthew Libatique, coming off last year’s Black Swan, finds the gorgeous landscape in the setting.

The shame of it all is that, outside of a few moments of action bliss (including Craig defending a hallway of creatures), none of it adds up to much. The first attack is a darkly lit, incoherent mess and the ones dropped in the middle are over too quickly and further display Favreau’s inability to handle action and build tension to any real effect. In an attempt to patch up these failed scenes, Favreau and his sound design team turn everything up to 11, leaving a numb, loud experience in the film’s wake. Tremendous audio work can rescue a film, but not much can be done if the mechanics behind it break down. Most baffling is Olivia Wilde‘s character, completely miscast and terribly written. She nearly saved Tron: Legacy last year, but her ominous initial scenes here come off laughable and some of the surprises she has in store are simply preposterous. Sam Rockwell does his best as a one-note bartender, while Walton Goggins provides some intentional humor. As for our main duo – Indiana Jones and James Bond side by side –  I expected a few captivating character moments, but they never really come as Ford gets pushed to the side for Craig’s wholly uninteresting back story (complete with asinine flashbacks).

In the end, Cowboys & Aliens has the mold of the great blockbusters it desperately wants to be, without out any of the wit or enthusiasm. This isn’t a disaster, but a substantial disappointment.