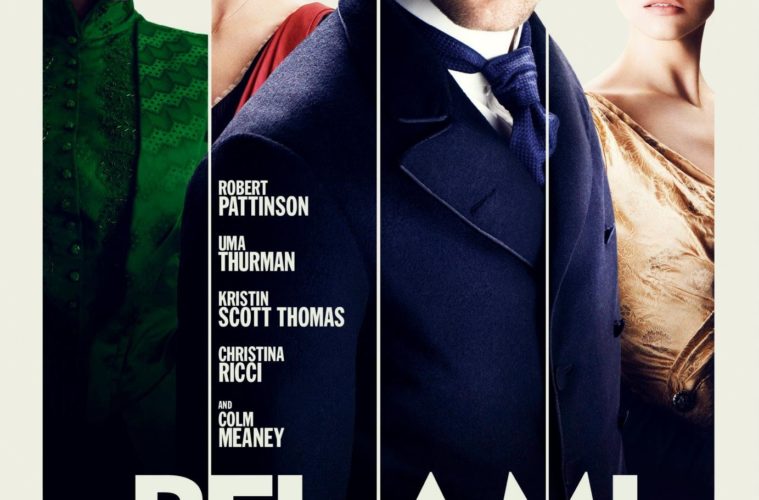 Based on Guy de Maupassant’s famous 19th century novel of the same name, the story of Bel Ami centers on a young Parisian named Georges Duroy (Robert Pattinson), who has just come back home after a military service in Algeria. Upon returning, he has a chance meeting with his former comrade Charles Forestier (Philip Glenister), who offers him a writing job at a well-respected newspaper. From here, Duroy gains a taste for power, and latches on to it, desperate for more.

Forestier invites him to dinner, and here he is introduced to three sophisticated women. They are Madeleine Forestier (Uma Thurman), Madame Walter (Kristin Scott Thomas), and Clotilde de Marelle (Christina Ricci). Each of these ladies are very different from each other, but Duroy seduces them all with his boyish charm, using them for his own gain. He eventually makes his mark even on the powerful newspaper editor, Rousset (Colm Meaney), becoming an integral part of the boss’s circle. It is essentially a rags-to-riches story, but with the section of Duroy’s life that was spent in poverty left practically untouched. Instead, the film chooses to focus on his rise through the ranks of Parisian aristocracy, as he ruthlessly powers his way along. He uses his winning smile to attract women to him, and then sleeps with them, almost as something he must endure. One particularly uncomfortable scene sees him engaging in a sexual act with a pained anger on his face. The only thing he desires is power, but what he will do with that when he gets it is something that isn’t really explored.

There is a subplot involving complex political details, which is rather confusing, and detracts from the main story. The film is at its most absorbing when focusing on the flagrant exploits of Duroy, for at its core, Bel Ami is a character study. There are certainly many intricacies to the side-characters, but the essence lies in Duroy’s conflicted character and the way in which he goes about doing things. He is not an inherently vicious character, and does not do deliberately cruel things, but he certainly is amoral in many ways and Pattinson makes him all the more intriguing.

His performance is certainly a big step away from the world of Twilight. Here, he is more matured, more developed as an actor. He shows a diverse array of emotion, and completely embodies the character of Duroy. It must have been difficult to know how to play a character that is very hard to read, but Pattinson makes a valiant effort with a complex portrayal of shallowness. In addition to the strong show from Pattinson, the rest of the cast is also effective. A special mention must go to Colm Meaney for his commanding performance as the proud, authorative figure that also had a tender side. Also to Thurman, who depicts Madeleine’s cool, understanding character with a subtle and sincere portrayal. And given the intensity of the roles, it is impressive that none of the cast really takes anything over-the-top, something which would have lessened the impact of the film overall.

Considering it is set in Paris, the directors (Declan Donnellan and Nick Ormerod) could have ordered the actors to use French accents. Instead, they speak with English ones, and it is left to the imagination that they are speaking the native tongue. And this works, for had they used faux Parisian accents, it might have come off as unauthentic and showy. Bel Ami contains some stellar performances, meticulous art design and an absorbing atmosphere. It may be slightly underwhelming, but there is a certain poignancy to be found here, livening up what could have been a stale romantic tale.

Bel Ami is currently in release in the UK, and will hit theaters in the US on June 8th.