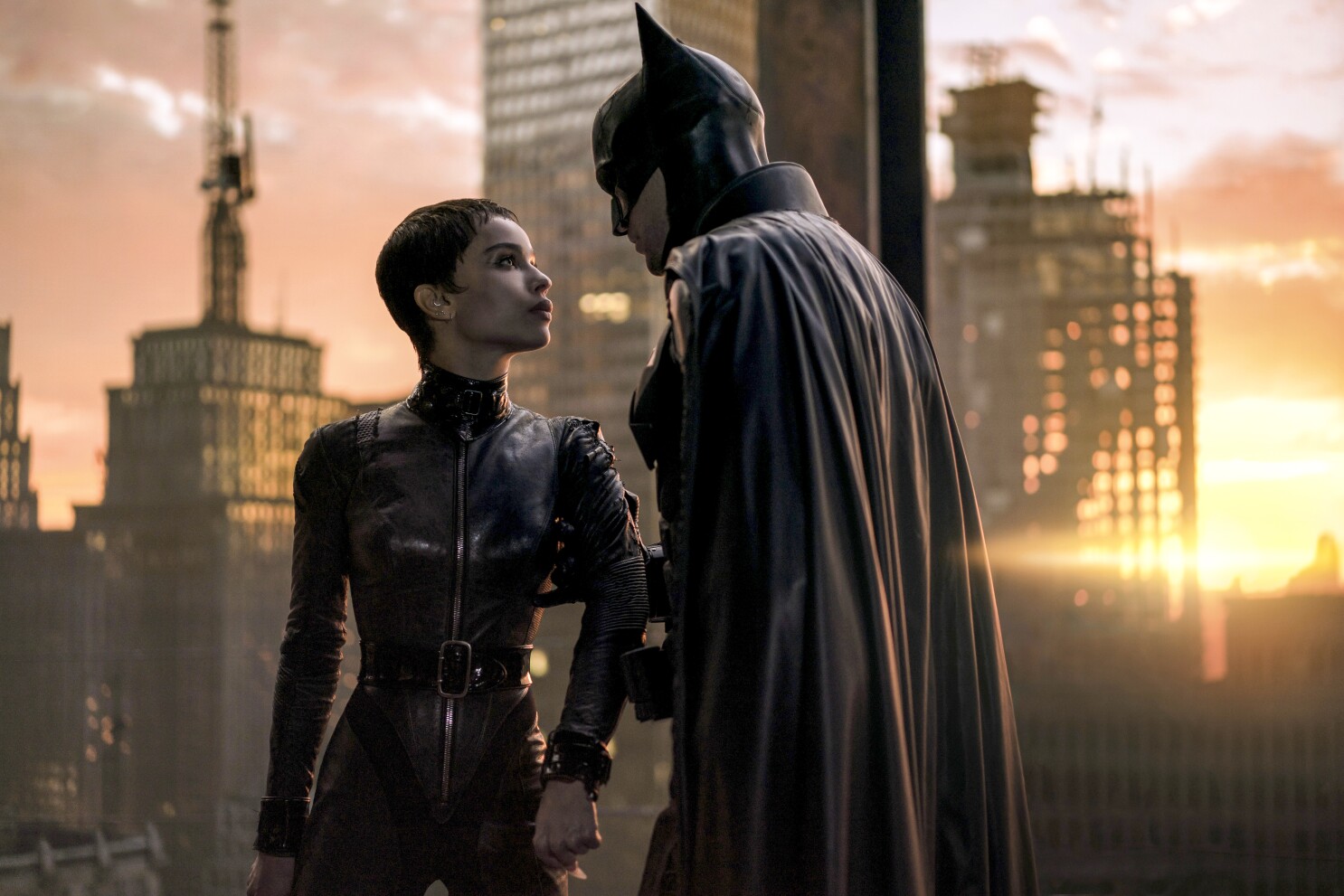 Over the 80 years of his comic book, televised, and cinematic existence, Batman has always grappled with his secretive dual identity. Bruce Wayne hobnobs and toasts champagne with fellow philanthropic one-percenters during the day, while his Caped Crusader alter-ego attempts to clean up Gotham City and its never-ending crime problem at night, a particularly torturous method of dealing with childhood trauma. But in The Batman, director Matt Reeves’ moody and riveting addition to the canon, that binary is mostly absent. The cape and cowl isn’t so much a nocturnal costume as it is around-the-clock attire.

In the margins, this younger, reclusive Bruce Wayne (Robert Pattinson, marking a return to blockbuster fare) mostly keeps to his marble tower, a gothic cathedral high-rise where he cleans off his gobs of mascara and journals about his nightly patrols. With a whispery growl, he narrates some of these diary entries, motorcycling throughout the city against Nirvana’s “Something In The Way,” which might as well be his emo anthem. Like Kurt Cobain, Bruce is trapped inside a tormented bubble of fame and haunted by his family legacy—a far cry from the schmoozing public figures that Keaton and Bale and Affleck could unmask on a dime. It’s no wonder why Pattinson’s Bat takes his grueling, masochistic work home with him.

Of course, it’s still early in his tenure as a shadowy vigilante. Drawing inspiration from “The Long Halloween,” Reeves and co-writer Peter Craig (thankfully) avoid retelling their superhero’s origin story, picking up instead in his second year of crime-fighting duty. That might explain why Batman initially hesitates when jumping from high altitudes (he’s still working out the kinks of his suit), and conversely, why he has no trouble doling out punishments on little sleep. “I can’t be everywhere,” he laments, and so he relies on his symbol in the sky to strike fear around every corner. It’s enough to spook the lowly ghouls and goblins that beat up subway passengers and rob bodega clerks. They soon suffer the wrath of this vengeful brooder.

But there are bigger fish to fry—namely, the Riddler (Paul Dano), a serial killer who begins a string of murders by knocking off the mayor, leaving notes addressed to Batman at every twisted crime scene. There’s nothing random about this killing spree, which attempts to expose the city’s top political and legal officials for their betrayals, lies, and connections to mob boss Carmine Falcone (John Turturro) and Thomas Wayne, Bruce’s late father. It’s a dense and complicated puzzle to solve, and the Penguin (Colin Farrell, wearing goopy prosthetics that render him indistinguishable) doesn’t make it easier as a suspicious criminal middleweight running a nightclub and setting up roadblocks in the process.

Every great superhero movie needs a great villain, and Dano mostly fulfills his end of the bargain. Dressed in a gas mask and steampunk attire, he’s practically the opposite of Jim Carrey’s neon green question mark, wordplaying and croaking in inconsistent voices as though he emerged from the Saw franchise. In some ways, he’s just adapting to the environment around him, a dark and gloomy hellscape punctuated by cinematographer Greig Fraser’s feverish red-orange aesthetic that glistens from streetlights and off puddles. This is Batman by way of Zodiac, inspired by dead-ends and missteps, and drenched by oppressive rain that turns Gotham’s architectural feats and half-completed construction projects into imposing wetland ornaments.

Aside from the mystery at its core, this is Reeves’ greatest strength as a director—building out and navigating a city that’s been repeatedly reconsidered and consistently burdened by decay. That interest was evident in his dystopian Planet of the Apes movies, but specifically in Cloverfield, which explores an apocalyptic scenario throughout New York’s towering buildings and subterranean levels. The power of that movie came in its handheld kineticism and unsuspecting imagery—like when a camcorder laying in Central Park suddenly captures the monster hovering above it. There’s a similar flourish in The Batman during a thunderous and pulse-pounding—if not slightly abstract—car chase, which ends with a shot of Pattinson approaching a flipped vehicle in front of towering flames that supplies the movie’s most iconic shot.

In a three-hour procedural, these jolts help diversify a detective movie that would rather snoop around with Batman and his uncorrupted ally, Lt. Jim Gordon (Jeffrey Wright). Throughout Gotham’s abandoned warehouses and rooftops, they meet to exchange information, design attack plans, and consider the identity of Riddler’s next victim. Along the way, they gain a third gumshoe in Selina Kyle (Zoe Kravitz), a cat burglar with her own set of methods and motives for helping Batman. This isn’t a Pfeiffer-level antagonist, but Kravitz still creates the electric half of a sexy pairing—Pattinson’s mostly subtle performance comes alive around her masked presence. Together they utilize Batman’s facial recognition tech, sorted out by a minimally-used Alfred (Andy Serkis), and bicker over the moral boundaries that separate them from the city’s thugs.

As the movie revs into its third act—thanks largely to Michael Giacchino’s reverberating, imperial march score—it loses some of the power and ingenuity it had previously teased, cribbing narrative notes from The Dark Knight without the safety net of a magnetic presence like Heath Ledger’s Joker. But Reeves isn’t going for the scope and bombast that Christopher Nolan or even Zack Snyder previously aimed for. This is an interior movie, menaced by a cerebral puzzler who might as well be a contemporary stand-in for dark web incels inspiring conspiracy-theorist online copycats. It’s a mystery box, but it should have more bite. In the same way Nolan acknowledges but never interrogates a post-9/11 climate, Reeves doesn’t spend the time necessary to make Riddler’s social media stoking a climactic punch to the gut.

But it’s hard to quibble when a superhero movie with three-too-many endings feels this focused and sure of itself. After the gritty realism of recent iterations, it might have made sense for Reeves to follow Joel Shumacher’s playbook and return his Batman into a more playful and colorful playground. Instead, Reeves leans into noir and burrows deeper into the psyche, dusting off Gotham’s forgotten pockets and cultivating a crime fighter coming to terms with himself. In an era of superhero gluttony, in which these familiar stories, characters, and visuals tend to bleed together, The Batman holds the rare distinction of creating and embracing its own identity.

The Batman is now in wide release.