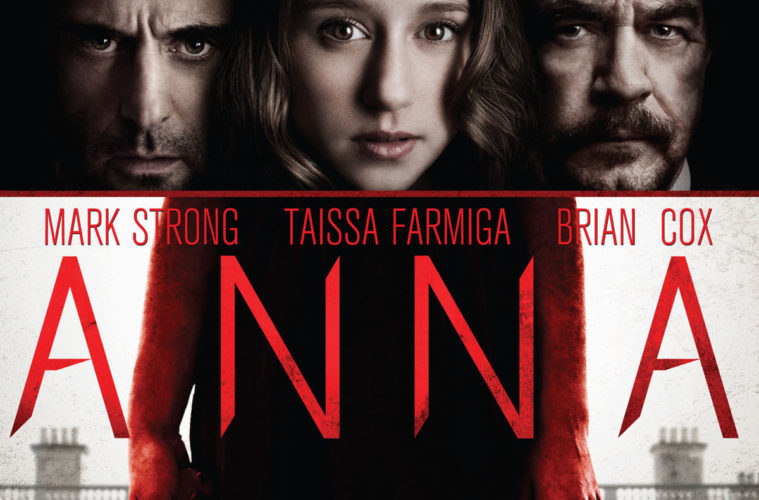 What if you could go all Inception on The Bad Seed, or mind-meld with Damien from The Omen? I suspect it was a theoretical mash-up along these lines that served as the pitch for Jorge Dorado’s Anna, a sci-fi thriller about a psychic “memory detective” (Mark Strong) who enters the mind of a disturbed young girl (Taissa Farmiga) and finds more there than he bargained for.

Audiences coming to Anna (originally titled Mindscape) may just find more than they bargained for as well. Instead of a silly throw-away schlocker, Anna turns out to be a modestly entertaining slice of B-movie entertainment. It’s also the unlikely showcase for two excellent performances, one by Strong as the detective and the other from Farmiga, who plays the potentially deranged brat. It doesn’t quite stick the landing, but there’s some good value along the way.

Destined to draw comparisons to Christopher Nolan’s 2010 mind-bender, Anna is actually a much smaller film with a much different aim and trajectory. Instead of a grand-scale heist, Dorado, his cast and crew shrink their scope and climb inside the addled, shadowy psyche of a teenager who may be more than she initially appears. This approach feels fresh at first, because it places emphasis on Strong’s detective, John Washington, and Farmiga’s strange, uneasy teenager and the psychological struggle they share. He’s recovering from a failed mindscape (the process by which he examines suspect’s past memories) and the recent suicide of his wife, while Anna’s been locked away by distraught parents who fear for her safety and question her role in sinister events at the school she was enrolled in. If it sounds like the product of a collaboration between the SyFy Channel and the Lifetime Network, that’s not entirely far from the truth. As written by Guy Holmes, Anna concerns itself with old gothic horror tropes and courtroom procedural psycho-analyzing, mixing the two to sometimes odd and exasperating effect. Farmiga’s Anna is on a hunger strike that seems aimed at her parent’s oppression, but as John unfolds the edges of this arcane puzzle, other unsettling facts come to light. At school, three girls are the targets of what looks like an attempted homicide and Anna’s old teacher has incriminating photos of her that are troubling to say the least. John, as it turns out, isn’t much of a detective really, as he’s far too slow on the uptake and starts suspecting Anna of darkness long after your average non memory-sifting sort would have.

Ultimately, I wasn’t much convinced by the story itself, which pushes off into too many disparate directions and ultimately wastes the mind detective concept on a hastily concocted finale. The visual verve of the picture is also curiously mundane. In the place of surrealistic vistas like Nolan’s picture or the overheated phantasmagorias of Chuck Russell’s Dreamscape, Dorado retreats to the styling of Guillermo Del Toro and favors symbolic imagery—sinister stairs, puddles of drifting water, deep pools of crimson red—over invention. The second tier of the cast, including a wasted Brian Cox, drift in and out of the picture like restless phantoms. The twist ending is aiming for freshness and achieves a measure of surprise—it might not be the first conclusion you arrive at—but trades up basic common sense in the process. As I implied at the start, there is value in Anna and I can, to a point, recommend it based upon the work of Taissa Farmiga, who ranks high amongst the creepy kid hall of fame, right up there with Patty McCormick and Linda Blair but with a realistic presence of awareness that neither of those possessed. For much of the movie we are to be suspicious of Anna but on the fence about her potential for evil, while also aware that everything that happens may be a clever orchestration on her part.

Is she Moriarty, Hannibal Lecter, or just a gifted young woman in need of guidance and help? What works is the way Farmiga dislodges the expected stereotypes by making Anna humorously aware of her own creepiness and banking on that outsider status when playing mind games with Strong. She’s captivating in every scene she’s in and when the film just lets she and her older co-star command the screen with tense verbal warfare, Anna bears the makings of a much stronger, more substantial film. This is an earnest little thriller with dreams of something grander, and every once in awhile it manages to pull us along in its delusion.

Anna is now playing in limited release and available on VOD.