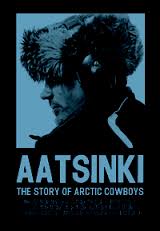 The frozen plains of Finnish Lapland may not seem like a natural setting for a modern Western, but Jessica Oreck’s Aatsinki: The Story of Arctic Cowboys convinces otherwise with a stark, deeply observational documentary following a family of reindeer farmers through the seasonal cycle. Although Oreck doesn’t follow any prescribed narrative structure or tell any particular story, the way she captures her subjects in the midst of their daily routines paints a hypnotic and vivid portrait of men living at the outskirts of civilization, their existence inextricably entwined with nature.

Shorn of informational anecdotes and talking-head interviews, Aatsinki abandons the usual documentary structure in favor of a more poetic, immersive experience. Aarne and Lasse Aatsinki are brothers who make their living from an generation-spanning career, reindeer herding.  Oreck’s movie breaks down their trade into day-to-day minutia that takes the time to watch them whittle branches into spiraled kindling and march their large four-legged charges through beautiful, icy landscapes. The men and their team use ATVs, a helicopter and walkie-talkies to manage the herd, but the technological vestiges of modernity don’t stop there; herders go about their frosty work wearing i-pods and back at home there’s time for a game of Wii with the kids. The reindeer are commodity for the family first—transportation, food, revenue—and wonder-works of nature second. Aatsinki reflects that facet with a composition that spends time with all aspects of maintaining the herd, including a surprisingly compelling scene depicting the gutting and skinning of one of the deer, the organs issuing up rivulets of steam in the stinging chill of an arctic morning. A break from the cold, crisp imagery of the outdoors lets the viewer spend time with the Aatsinkis and their domestic brood for Christmas. Oreck’s camera lingers wherever it goes, and whether it’s the flickering flames of a campfire or the vibrant hues of a burgeoning new day, the results are always breathtaking. There’s a unique and quiet thrill to be had watching hundreds of reindeer picking their way through a snowy copse of trees, delivered in ambling, unhurried detail.

As the seasons change, the languid rhythms of the herding routines create a lulling cocoon that may distract some viewers and repel others. Whether or not patience is rewarded will largely depend on how much each audience member chooses to embrace the tone and pacing that Oreck sets up at the start.  Aatsinki represents agrarian methodology from the producer perspective, objective but not detached from the human in the way films like Bestiary or Sweetgrass were. Instead of posing as some idyll of stripped-down, primitive simplicity this lifestyle suggests a balance achieved, where the merits of modern civilization co-exist with ancient traditions. The sensational and intentionally abstract aspects of this year’s superior Leviathan, that crawled directly into the visceral POV of commercial fisherman, are mostlyabsent here. While Oreck has a scientist’s eye and an artist’s heart, she’s committed to reconciling both instead of succumbing to one or the other. The compositions are as visually assertive as the best National Geographic specials, and the human interactions represent a no-less invested skill. The struggle faced is that the middle-ground is an occasionally tedious trade-off that will most certainly challenge many viewers even while stunning them with refreshing sights.

Oreck was an entomologist at the American Museum of Natural History when she broke into the docu business with her first feature Beetle Queen Conquers  Tokyo, a lyrical and  absorbing look at Japan’s odd obsession with insects. That one traded up David Attenborough-style narrations of scientific fact for excerpts of Japanese poetry and philosophical musings on our relationship with the natural world. The film’s construction juxtaposed high-angle shots of salary-men skittering down neon streets against the hectic, buzzing milieu of hive life.  Aatsinki leaves behind Beetle Queen’s structure but retains Oreck’s dogged insistence on naturalism, maintaining that the viewer of these worlds is just as vital to the portrait as the environs themselves. Aatsinki, like Beetle Queen before it, is not always entirely accessible and Oreck still seems to be searching for a sublime fusion of her technique and ambitions. Nonetheless, her sophomore feature is also a majestic and mesmerizing experience that joins the new stable of ethnobiology as cinema, in the process redefining what documentary filmmaking can be.